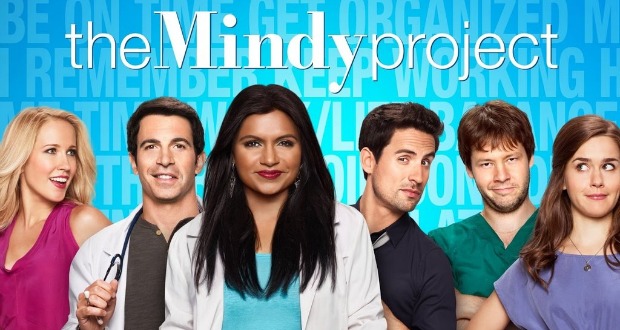 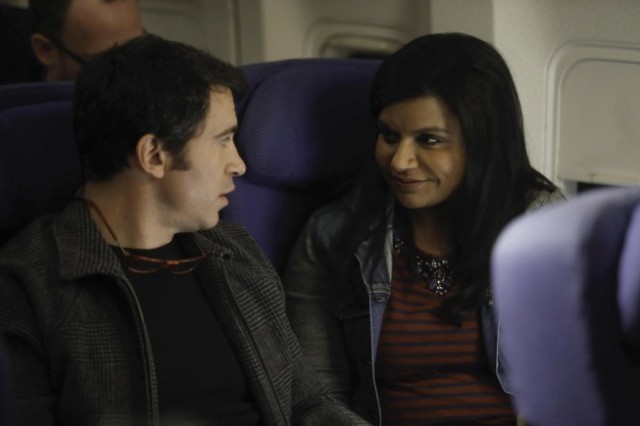 Well, how ‘bout that, Mindy-fans? That is totally unexpected! Big, big moments between Danny and Mindy on tonight’s “The Mindy Project.” Things happen between them that I thought would have been dragged out for months.

I’m also glad that the show is back in tiptop form. I knew last week’s disappointing episode was just a fluke. This week’s episode is not just eventful, but hysterically funny as well. We even saw the brief return of Chloe Silverado.

Mindy and Danny are still in Los Angeles after last week’s conference, though Peter and Morgan make it back to New York. Danny asks Mindy to come with him to the desert (where exactly, we don’t know) to confront his father, played by Dan Hedaya. Mindy refuses, but asks Danny to drive her to the airport. He agrees, but instead takes her to his father’s house.

Danny wants to beat up his father for abandoning him, but when he pounds on the door, he comes face to face with another Danny Castellano: a young girl who is apparently his half-sister. He’s also confronted with the man his father has become—a kind, loving person who cooks meals and takes care of his family—rather than the irresponsible man who left the older Danny alone as a child. His father tries to apologize with some potato-chip pie (is that the dinner or the dessert?), and asks him to be part of the family again.

Meanwhile, back in the New York office, Peter and Morgan accidentally get trapped in the bathroom, where they overhear Lawyer Cliff in his office through the vent. Cliff is nursing his broken heart by hysterically singing Jewel’s “You Were Meant for Me” over and over—and over—again. Morgan and Peter want his help, but decide to let Cliff save face by not informing him that they can hear him.

When the cleaning staff opens the bathroom door, Peter and Morgan get out and bump into Cliff in the elevator. Cliff tells them that he and Mindy broke up, and they, thinking that Mindy dumped him, take him out for drinks to make him feel better. After a few rounds they discover that he broke up with Mindy, rather than the other way around, because he couldn’t trust her with Casey. Peter explains that he was at Casey’s party and that nothing happened, and Cliff realizes that he should fight to get Mindy back.

Mindy gets called back to the desert to rescue a lost, drunk Danny, and the two have a big confrontation: Danny angrily tells Mindy that it’s not worth it for her to try to get Cliff back because if he really wanted her, he wouldn’t have broken up with her. While Danny has the best intentions in telling her that, his delivery is wanting, and Mindy gets mad. She tells him that when they met he couldn’t understand why he was single, but she’s learned over time that he is mean and selfish.

While it almost seems like a couple scenes were edited out between the desert and their plane ride back (it’s a long time before they apologize to each other), I appreciate that Danny and Mindy’s friendship is so strong that the argument doesn’t affect it. They fight, but then they move on … even if we don’t get to see it all.

Mindy, still hoping to get back together with Cliff, asks Danny’s help—both Dannys, that is. Little Danny suggests that Mindy write Cliff a letter, and Dr. Danny helps her write the letter on the plane back to NY, saying lovely, magical things; probably the kinds of things Danny would say to Mindy directly. She finishes the letter (email? text?), and apparently bought the wifi on the plane, because she sends it to Cliff straight away.

She goes to the back of the plane to get a thank-you tonic water for Danny. While she’s there, the plane hits some turbulence and freaks Danny out—enough that he realizes what’s important in life: Mindy. He goes to her and plants a big, passionate kiss on her. She’s at first confused but then kisses him back. Yay! Woo-hoo! Mile High Club, here they come!

No, let’s not be ridiculous. But you never know. In any case, OMG! Big leap forward for us Mindy-Danny shippers! That’s quite a game-changer, and one I really didn’t think would come so early—though of course, with a very long hiatus until the show comes back on April 1(!), I suspected they’d have to do something big. What fun.

“For the last time, there’s no scientific correlation between being emotional and being ticklish.”—Danny

“I could use you for, you know, whatever it’s called, emotional support.”—Danny

“I would love to be there to support you, you’ve never been this interesting.”—Mindy

“And I was on the phone for so long that the phone started smelling like my breath, which you know I hate.”—Mindy

“Does Mindy think she can do better, ’cause she can’t. No guy wants a chick that successful.”—Peter

“I’ve got a carton of kittens at home that think I’m their mom. I’m their Dad.”—Morgan

“It’s very confusing out here, I was trying to follow the Big Dipper, but I don’t know what it means.”—Danny

“Every so often, whistle that song from “The Hunger Games” so I know you’re not dead.”—Mindy

“My philosophy is that an ID should be aspirational.”—Mindy

“I sat on an armadillo and killed it. That was not good for my self esteem.”—Mindy

Cliff (on phone): “Morgan, I thought about it. I need to get Mindy back.”
Morgan: “Yeah you do. Who am I speaking to?”

So what did you think, Mindy fans? Can you believe they went there? Did you see it coming? What sort of problems do you think Mindy and Danny will face when we all return in April? Is there any chance they’ll be happy for a short while before all hell breaks lose? How are you going to pass the time until then?