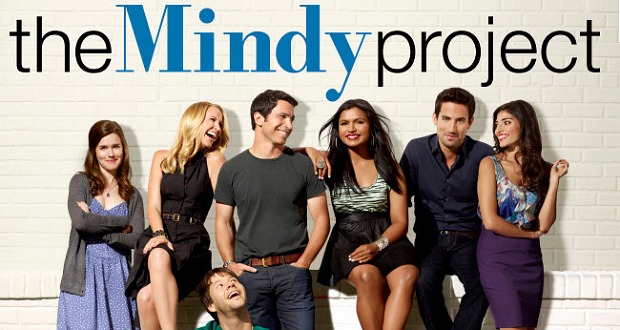 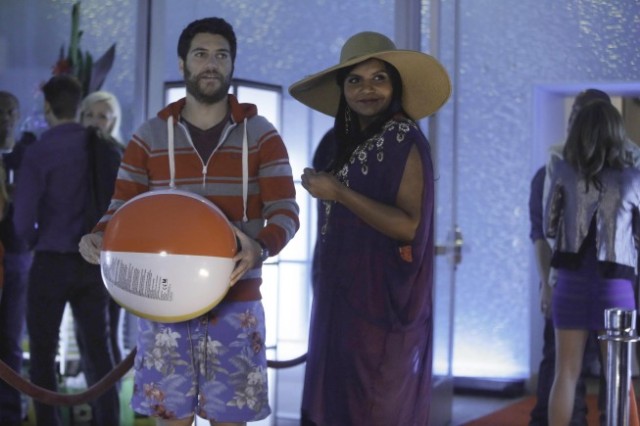 Well, I hate to say it, Mindy fans, but there’s a bump in the road for “The Mindy Project.” Not only are things not going so well for Mindy and Lawyer Cliff, but the streak of hysterically funny, truly winning episodes has lapsed. I’m hopeful that it’s just this one, and that next week’s episode (the winter finale, and the last episode until April) will be back to its wonderful self.

Jeremy decides to send Mindy, Danny, Peter, and (for some reason) Morgan to Los Angeles for a conference on cosmetic injectables. (As if the show could fool anyone into thinking it’s actually filmed in New York and not in L.A.) Mindy and Peter are of course excited to sample the thrilling Hollywood life as only television can capture it. Peter even has a scheme to find Maria Menounos, who he hooked up with after the office holiday party.

While Mindy is packing for the trip, Lawyer Cliff tells her that he lost his apartment, to asbestos, and Mindy suggests that they move in together. He feels it’s a little soon, and she says that she and her former fiancé Casey had been living together by this point in their relationship, but understandably, Cliff doesn’t want to hear any more about Mindy’s ex. He tells her he’ll think about it.

Danny, on the other hand, is apprehensive about going to L.A. and wants to spend the whole time in his hotel. It turns out Danny’s father lives in L.A. and Danny’s afraid of bumping into him. Morgan convinces Danny to go out on the town with him for their last night, canceling his fancy hotel room and putting him in the YMCA instead. While they’re out, Morgan springs on Danny that he arranged for them to have dinner with Danny’s father the next night (though I thought since it was their last night in L.A. that they would be going home the next day).

Mindy and Peter go shoe shopping and—speak of the devil—bump into Casey, who now owns the shoe shop (which, btw, contains wall to wall clothes), and is apparently doing quite well. Boy, it is so, so easy for people to get jobs—really amazing, lucrative careers, in fact—on television. He invites them to his Hollywood pool party that evening, and Mindy and Peter go, even after Mindy promises Cliff that she won’t have dinner with Casey.

It always makes me a little crazy when characters lie, probably because I happen to be a terrible liar, but especially when the truth isn’t so bad and is ultimately better for everyone to hear. Cliff should tell Mindy that he’s not ready to move in with her instead of saying “I’m thinking about it.” Mindy should explain to Cliff that Casey had already invited them to his party, which by the way is different from a one-on-one dinner, and that Peter wants to go, but instead she promises him she won’t have dinner with Casey. But I guess that’s the magical ingredient that all stories need: conflict. If they told the truth, there wouldn’t be a story.

Meanwhile, Danny returns to his room at the Y and tries to reach out to Mindy. Since her phone battery died, he leaves a message on her voicemail asking for her advice. I’d love to have seen that conversation play out. After much pacing and staring at his phone, Danny ultimately decides to go ahead and call his father.

Mindy returns to her hotel after the party and plugs in her dead phone to find several missed calls from Cliff. She calls him back, and he explains that he was initially thinking of moving in with her because of how much he cares for her, but then he caught a picture of her in the pool with Casey. (How and why he found such a picture so quickly is a little beyond me, but whatever.) He breaks up with her because he no longer feels he can trust her, and as a divorce lawyer—not to mention a defeatist coward—he feels that it’s better for them to break up now instead of further down the line, since this relationship, like all others, is ultimately doomed.

Yes, I knew it couldn’t last too long with Lawyer Cliff, a) because of Mindy’s track record and b) to make way for her eventual relationship with Danny, but I thought they’d let it play out a little longer. These things happen much too quickly on this show. At least there is one more episode to resolve some of these Cliff-hangers (heh-heh) before the show takes an extended hiatus until April. We’ll have to see what happens next week.

In the meantime, I still have a few favorite lines from this less-than-stellar episode:

“Babe, this is the palest I’ve ever been, I’m basically a white person. Yesterday, I caught myself watching lacrosse and I liked it.”—Mindy, when Cliff asks about her bottle of “Hawaiian Slut Tanning Oil”

Mindy: “Things are going so well between us, you know, we’re already sharing a toothbrush.”
Cliff: “We are?”
Mindy: “No.”

Danny: “Wait a minute, is your phone on? Turn it off, you’re gonna crash the plane!”
Mindy: “They just say that so the pilots can hog all the Internet.”

Danny: “Oh yeah, you’re not catholic. What are you again, like, an Ottoman?”
Mindy: “I’m obviously… pretty sure that I’m Hindu.”

“You have been cooped up in your room all week like the girl from Tangled.”—Morgan

“Do you carry Fat Steps Kankle Wranglers? They’re for the problematic foot.”—Mindy

“He’s way too tan right now. You know I like my men milky white.”—Mindy

“Are we going to the Captain Phillips stunt show?”—Danny

“You’re a great guy. Your skin is soft and tender like a veal.”—Mindy

So what do you think, Mindy fans? Is it really over between Cliff and Mindy, or will he give her a chance to explain? Why did Danny decide to contact his father after all? Will Kevin Smith be back for yet another cameo? Did you like the episode, or did you also find it lacking?