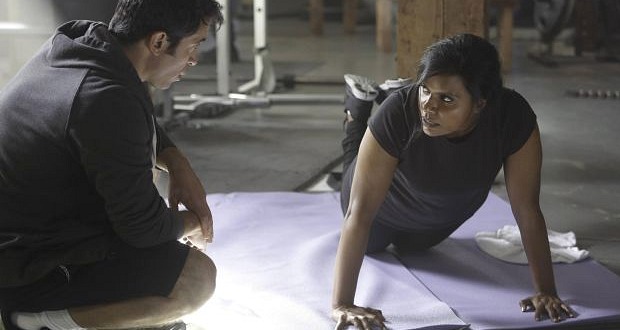 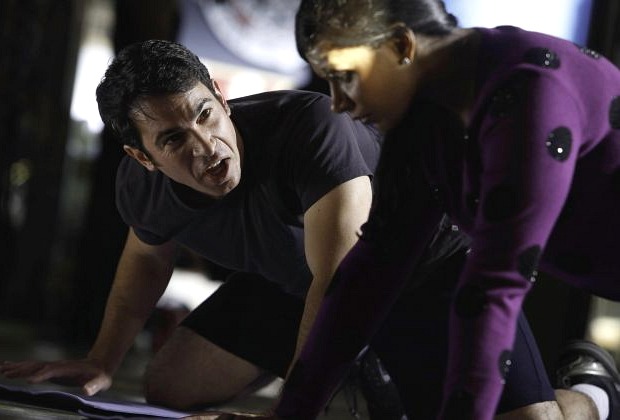 Happy New Year, Mindy fans! “The Mindy Project” is back, as hysterical as ever, and tackles a problem many of us face especially at this time of year: getting in shape.

Many people, myself included, use New Year’s resolutions as a chance to get back in shape—some shape other than round and bulgy, that is. Mindy Lahiri is no different, though she doesn’t call it a new year’s resolution, per se.

After a quick recap of her relationship with Lawyer Cliff so far (boy, she moves fast; how long have they been dating thus far? Or have I been married too long to remember how quickly early relationships can move?), he invites her to go on a ski trip with him. The look of horror on her face at the thought of showing off her “bikini body” in the middle of January is one we’ve all experienced. And she refuses to buy a bathing suit with a little skirt attached (I guess I shouldn’t admit that I have one of those).

To insure a good “first naked impression,” she starts a workout regimen, and after trying Morgan out as a personal trainer—in some strange but still failing arrangement where he pays her to train her—she persuades Danny to be her personal trainer (hence the episode’s title). Danny eventually figures out the best way to work with her, by speaking in her language: using faux red-carpet circumstances and celebrities caught in life or death situations to motivate Mindy into push-ups and leg-lifts.

After a hard workout at Danny’s gym, Mindy decides to enjoy the steam room, which she enters naked. On seeing Danny in a towel in the apparently co-ed room, she freaks out (natch), blowing her “first naked impression” with Danny. In an attempt at being gentlemanly, he gives her his towel, exposing himself to her, but she is more grossed out by his “genital sweat,” and drops the towel on the floor. In the tussling, she somehow gets her hair caught in his watch, so not only are they now both naked in a sauna but literally attached to each other. They eventually get untangled, but she falls and breaks her ankle.

Mindy Kaling is brilliant. Besides being genuinely funny, she is not afraid to be herself, even while talking about her own shortcomings. This situation between Mindy Lahiri and Danny is also the perfect reason why they are such great friends, and would make an even better couple: they’ve already seen and experienced the worst sides of each other, and survived.

Later, in the office, Danny tries to give Mindy advice about her body, since he’s now seen her naked, but she (understandably) will have none of it. She, however, starts to see the difference the workouts have made, and appreciates her body for what it is—as Danny almost catches her naked again (why would she strip down in her office?).

Mindy listens to Danny’s bodily advice expecting the worst, and takes on all men for saying they don’t care about women’s bodies while they simultaneously date “ass models.” But Danny’s suggestion is simple, and very kind: don’t hold in your stomach because it makes you look nervous. He doesn’t wish for her the many “suggestions” others have made to her over the years, like losing weight or having blue eyes, and simply says: “You’re a woman and that’s good. Look like a woman.” As someone who’s always embraced my feminine side, wearing skirts and dresses when jeans were more fashionable, I really appreciate that.

Meanwhile, Jeremy reluctantly puts Peter in charge of the office while he takes a few sick days, and Peter learns how difficult Jeremy’s managerial role is. Peter eventually earns a little respect from the other officemates, while developing respect for Jeremy. Jeremy also gets some of his swagger back, blaming his managerial position for his weight gain and mojo loss (though I thought he was a manager or co-partner when the show started). Still, so good to see that side of Jeremy again.

So here are my favorite lines this episode:

“Guys, over the holiday I had five hams and a goose like I am a wolf in a children’s story.”—Mindy

“I’m not wearing a skirted bathing suit like some woman who gave up on life.”—Mindy

“Sex without nudity, that’s the ultimate. Tell me more.”—Betsy

“I can taste the cinnamon through my skin!”—Mindy, with her hand inside the coffee cake

Mindy: “This isn’t a gym, this is where a villain in a Batman movie goes to prepare his body.”
Danny: “It’s old school, right? This place didn’t even let women in until Manhattan went Tina Fey crazy in 2002.”

“These are performance rhinestones. They won’t flick off if you sweat.”—Mindy

“I wouldn’t notice you in a topless beach. Now, a bottomless beach? That’s another story.”—Danny

Mindy: “You will suppress this memory the way that you suppressed the memory of your priest molesting you when you were an altar boy.”
Danny: “That never happened.”
Mindy: “Perfect.”

“You’re not even fevered up? You’re just sitting at home playing nooky hooky?”—Peter, to Jeremy

“So I’m watching “Sleepy Hollow,” and the guy, what’s his name again, the main guy, Frasier Crane? No. Ichabod Jones?”—Tamra
“You have very European tastes, Danny, for a man who hates Europe. Very ‘70s, Danny.”—Mindy

So what did you think, Mindy fans? Did you appreciate Danny’s advice to Mindy? How long do you give Mindy’s relationship with Cliff? Glad to see Jeremy’s lothario return? Are you also trying to get in shape for the New Year?