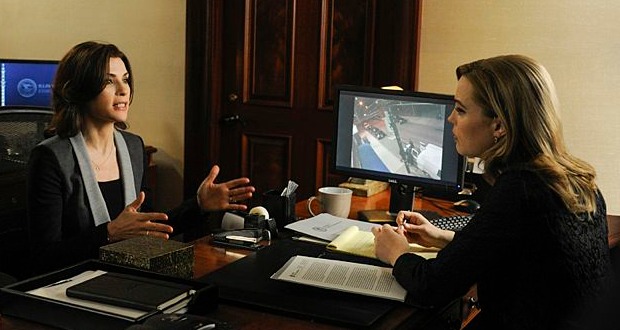 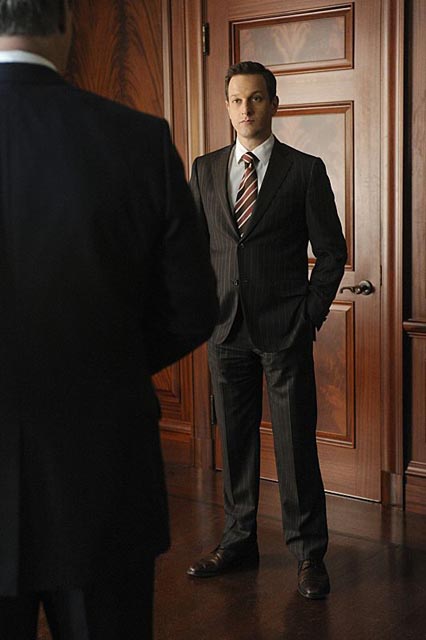 After last week’s especially exciting (at least for me) episode of “The Good Wife,” last night’s seems frustrating and not up to the show’s recent standards. Yet it still shares some great OMG moments and important plot points. Not to mention, new music from Bruce Springsteen, in an odd bit of cross promotion that sometimes works and sometimes seems out of place.

Perhaps the writers are trying to find new ways to keep Alicia and Will working together/against each other—and why not? The show wouldn’t be the same without their interaction. But they’re also showing how ridiculous and childish the rivalry between the two former lovers and their respective practices is getting, with the two firms bickering even when they’re supposed to be collaborating.

Lockhart/Gardner and Florrick/Agos each represent one half of a married couple accused of smuggling drugs from Brazil; the couple is being tried separately mostly because of the sparring firms. Judge Spencer (the versatile Victor Garber) believes in “judicial efficiency” and insists on a single trial but with two juries, one for each spouse, all sharing the same courtroom. Despite that they should be working together for the good of their clients, the dueling law firms seem to be taking each other down.

Much happens to make the case even more ridiculous: objections; objections to objections; one jury hearing one testimony while not hearing a different testimony; complaints about folding chairs and small rooms; constantly shifting juries. Poor Judge Spencer desperately tries to keep the peace, and eventually gets fed up, comparing it to herding cats.

The same juror complains each time, perhaps at the insistence of a female juror next to him. During a break, Alicia and Will notice him talking to a male member of the other jury and suspect misconduct, though he turns out to be his boyfriend. The lawyers keep the misconduct to themselves until the judge finally tires of all the shenanigans (rightly so; I tired of it long before he did), but when Alicia informs the judge, Will flat out lies and denies all knowledge of it. Oh boy, the way Alicia and Will are headed, the damage between them may be irreparable … if it isn’t already.

After Robyn pokes a hole in the initial witness’s testimony, implicating her in the case, the two law firms decide to work together and the wife’s jury finds her not guilty. The husband’s needs more information, however, and apparently Alicia and Cary persuade him to take the plea and serve a shortened sentence. Ah well, not all cases on “The Good Wife” can end happily.

Meanwhile, Marilyn Garbanza is investigating the press’s anonymous tip from last week that Peter may have tried to steal the election. She interviews Eli, Alicia, and Will, trying to work out what happened. Alicia denies everything, of course, and confidentially tells Peter to fix the situation. I’ve been singing Josh Charles’s praises for weeks now, but I also have to give it up to Julianna Margulies. Her progression from strong and assertive to tearful concern for her son is very moving.

Will tells Marilyn that he knew about the video and didn’t tell Peter, but he cannot answer anything further because of attorney-client privilege. When she requests that the governor waive the privilege, Peter and Will have a showdown while Marilyn waits outside. Ooo boy, the way Will narrowed his eyes at Peter! He’s got quite a vendetta, but this time for Diane, not for Alicia. He tries to extort Peter to get back for Diane losing her judgeship, which is simultaneously gallant and messed up. Peter refuses, and denies waiving the attorney-client privilege, forcing Marilyn to draw an inconclusive report. I’m not entirely convinced that Will isn’t totally unhinged, but what a fun confrontation between the two men. I just feel badly for Marilyn, saddled with the crappy job of sorting out the icky situation while everyone resents her for their being in trouble.

In tonight’s third plotline, Kalinda tries to apologize to Cary—probably because she wants something. Cary’s still angry with her for pretending to join with FA (back when they left LG), only to get information to take them down. Cary gets some turnabout by paying a bartender to spill a drink on him so that he can leave his phone in Kalinda’s presence, and text himself false information that Kalinda acts on. At least they have a laugh about it, but what is Kalinda ultimately trying to do? Somehow, I doubt it’s just out of friendship.

So what do you think, good-wifers? What does Kalinda really want with Cary? Is the damage between Alicia and Will irreparable, or do you still hold out hope? Will Peter survive this latest accusation and maintain his fiercely ethical administration? What did you think of the new music from Bruce Springsteen?