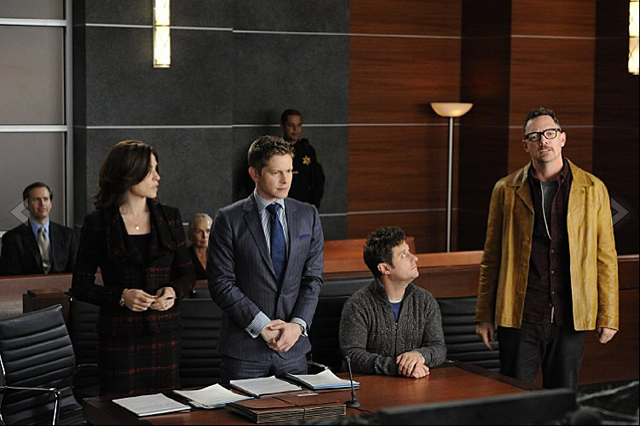 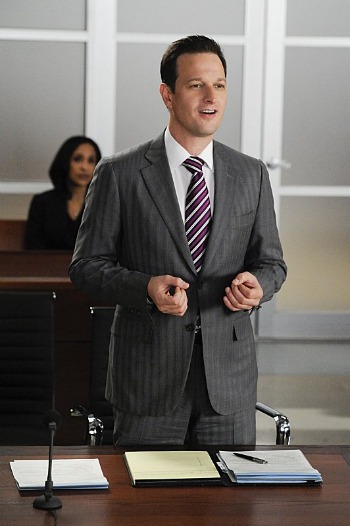 Welcome back, good-wifers! How about an exciting new episode of “The Good Wife” to kick off 2014? Happy New Year to us!

I’m always excited to watch the show, but this time is special. “The Good Wife” often gets its cases from real life situations, and this time I know exactly the case they’re talking about. In fact, I happen to be personally familiar with, even invested in, this case.

I’ve been anticipating tonight’s episode since I read about the premise on Thursday and wondered whether it in fact had to do with one of my all-time favorite musicians, Jonathan Coulton. His 2005 cover (re-write, essentially) of Sir Mix-A-Lot’s “Baby Got Back” was used without his permission in the show “Glee” almost a year ago, and I believe the situation is still hanging unresolved.

While it wasn’t the first time (and likely not the last) that’s happened with “Glee,” Coulton’s loyal and very active fan base helped thrust the incident into the spotlight and attract national attention.

Tonight’s episode is definitely, clearly about this case. While it’s really fun for me, it also makes it more difficult to watch because as an active member of Coulton’s fan base, who remembers watching the case unfold and following it as it progressed, I feel personally invested in the case. I really want to know how much of what happens on the show is real.

I definitely recognize some of the terms bandied about because of the case, and I know some of what happened when it broke a year ago—and now we’re reliving it. But Coulton’s been hush about where it currently stands. I do know that Coulton is absolutely nothing like the musicians depicted in the episode, who seemed like inexperienced, starving-artist idiots.

The episode picks up where December’s mid-season finale left off: at Florrick/Agos’s holiday party, generally. Specifically, it starts with Eli’s spit take after Marilyn tells Alicia’s mother that she’s naming her baby after the father, Peter. Not that Peter, of course! Not Alicia’s husband and Marilyn’s boss, Peter. No, of course not … But Marilyn also can’t disclose who or which Peter the father actually is. So Eli secretly sicks Kalinda on her to find out.

Alicia pays the musicians for performing at her party, and they ask her for help with a problem. They had recorded a folksy cover of a rap song with permission, essentially writing a new tune and arrangement but using the original lyrics. They later discovered that the fictional show Drama Camp (brilliant! So obviously “Glee!”) used their cover, their re-written arrangement, of the song without their consent, and wanted Alicia’s help to prove it. Alicia and Cary take the case because the band lost some $2.3 million revenue to Drama Camp when the show’s version became a big seller on iTunes.

The lawyer who represents Drama Camp’s studio, Burl Preston (played by F. Murray Abraham), returns to Lockhart/Gardner looking for Alicia. Will explains Alicia’s absence to him, and convinces him to hire Will to assist him. Will wants to steamroll ahead—without Diane’s consent—and gain clients in Los Angeles so that LG can expand there as well. What Will probably won’t admit though is that he also wants another opportunity to go head to head with Alicia.

Alicia tells Will to get over it. Well, her. But he insists that it’s just coincidence that keeps bringing them back together in court. (Seems more like foreplay, except they never get to the actual “play.”)

Will and Alicia both play dirty pool against each other, using cheap tactics to knock each other off their game. Will constantly objects to Alicia’s questioning, unsettling her, and despite Cary telling her not to sink to his level, she instead throws Will off by changing into the outfit she wore “the night you banged me the first time.” Talk about cheap tactics. While it’s fun to see the flashbacks and the effect Alicia’s wardrobe has on Will, it’s also ridiculous that he falls for it. Is he really so weak? Has he never seen her in that outfit since that first time? Or is he flummoxed every time?

Though the judge can see that Drama Camp clearly stole the arrangement, he finds in their favor because the musicians didn’t obtain the right kind of license. They had obtained a compulsory copyright license, when what they needed was a derivative license, which doesn’t protect them in this case. Alicia and Cary try to prove that the song was a satire, and the legal teams bring in two sparring musicologists who seem like they could be Alicia and Will in a few years, but FA doesn’t have much luck winning the case that way.

Eventually, Alicia enlists Robyn’s help with the case, and she discovers an odd sound on both recordings (at this point in the show, I shouted at my television—something I do often—“The Quack!” referring to a quack noise Coulton uses in place of an expletive at 2:40 in his “Baby Got Back”). Robyn finds the sound of a bowling ball hitting pins, confirming that Drama Camp used the musicians’ actual recording, not just their arrangement, which proves actual theft.

By the way, it’s fun to see Matthew Lillard again as the musician, and I hope he returns—as Robyn’s love interest, perhaps?

Meanwhile, while Kalinda is following Marilyn, her new gf Jenna is still following her, at Damian Boyle’s request. Kalinda gets annoyed, rightly so, and breaks it off with Jenna, who seems (mostly) happy to choose her friends (Boyle) over her lovers (Kalinda). Kalinda is way too quick to fall into bed with people.

After Will tries to cook a vote to expand LG into L.A., Diane confronts him, pointing out what I mentioned a few weeks ago: Will is not just moving full steam ahead, but he’s being reckless. (Diane doesn’t know about his love life.) Will insists that he’s fine—but he’s not—and says it’s not about Alicia—but it is (at least a little). Diane gives in to Will and agrees to vote his way. While I’m not sure exactly why, I don’t think I could say no to Will’s sweet face either.

Eventually, Eli confronts Marilyn, and she agrees to reveal the father of her baby: Peter Bogdanovich, the film director. While I enjoyed the idea that it could be Peter Florrick’s baby (while knowing that it of course wouldn’t be), this seemed like a cheap trick. In any case, Kalinda’s digging either directly or coincidentally brought forth a much bigger problem for the new governor: the possibility that he may have stolen his election.

So what did you think, good-wifers? Were you familiar with this court case from a year ago? How did you like how they handled it? Will Will ever take Alicia’s advice and get over her? Do you want him to?

UPDATE: Jonathan Coulton, the musician whose copyright infringement case is at the center of this episode, spoke to Vulture about its appearance on the show and where it currently stands (appeasing some of my curiosity).