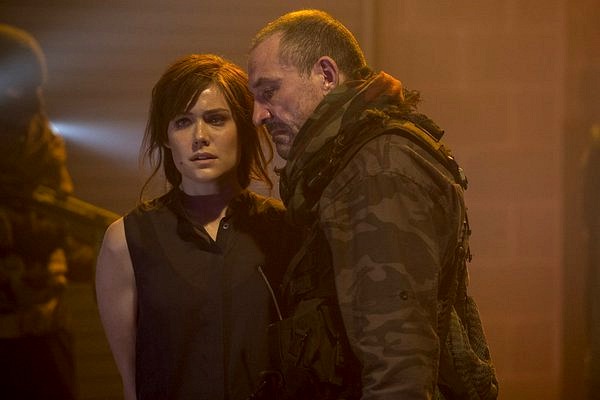 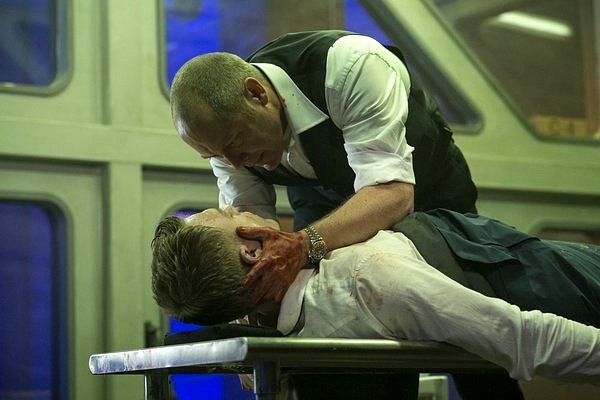 Ok, now that I’ve calmed down a little … this second part of the “Anslo Garrick” story on “The Blacklist” finds Red and the gang enduring even more tension and drama. Still in the glass box with six shades of chaos going on just out of his reach, Red slaps Ressler back to life and demands the code to get out. Otherwise, Liz is a goner. “Romeo.” The code is “Romeo,” Ressler reveals.

Out Red comes and Liz is still alive. Notice that this whole scene, along with there being blood everywhere, is bathed in “red” light. Good continuity, “Blacklist” crew.

READ: All “The Blacklist” News & Reviews

Soon enough, Red and Liz are being carted off in a van with Anslo’s crew. Red says to Liz, “The Emissary Hotel in Chicago – Mr. Kaplan.” She then grabs the paddles and goes after Anslo. She’s thrown out of the van, and off it goes, Red still in the back with a chip being carved out of his neck and handed off to a passing motorcyclist. Good grief!

Then we see Red strung up what appears to be an abandoned warehouse, and Cooper gets the bad news that the task force is decommissioned. “Reddington is and always has been a fugitive at large,” says Diane Fowler (the amazing Jane Alexander).

Meanwhile, Liz and Aram form a little rogue duo to check out security cameras, and Liz calls Mr. Kaplan, who returns the call after she gets home, just as Tom is trying to persuade her to walk away from the FBI.

Liz is trying to figure out how Anslo knew Red was at the Post Office. Aram determines that several calls were made from 8123 12th Street – directly across from Liz’s building — where the surveillance crew was camped out. The ones who were keeping tabs on Liz and Tom in their apartment.

Liz goes across the street and checks out the building. No backup, of course. This just seems like a bad move, doesn’t it? She’s shocked to find a bunch of screens with feeds to the inside of her apartment, but good job on taking out the bad guy who came up behind her. She’s morphed from a newbie to a seasoned FBI agent in ten episodes.

“Mr. Kaplan” shows up – it’s a woman (played by Susan Blommaert – if you’ve seen “Inside Llewyn Davis,” she plays the nurse in that film – along with a long list of other big and small screen credits). She tells Liz she has two directives: “To protect you and find my employer. I intend to do both.” She’s got a crew of her own, and they make their way to the warehouse where they think Red is being held – only he’s not there.

Meanwhile back at the warehouse where Red IS being held, Anslo asks Red why Liz is so special. Red says Anslo went behind his back and made deals he didn’t approve. Anslo punches Red, and says he’s merely the hired help, and his job was to get him out of the glass box and to the warehouse. As a bonus, Red gets an injection that enhances all the torture he’s enduring. He is not in great shape at this point.

Here’s where ALAN ALDA enters the picture! [See beginning of recap]. His name is Fitch, and he tells the gang of thugs to let Red down. “I thought we had an arrangement,” Fitch tells Red. “The people I represent … they’re nervous. They don’t know what to think.”

Fitch says they could have killed Red any day over the past two decades. Maybe Red planned to expose them when he turned himself into the FBI. “I’ve always liked you, Ray. You were a pain in my neck, but I liked you.”

I don’t like seeing Red in a position of weakness. And Fitch is clearly in the position of power here. Red tells Fitch that turning himself into the FBI has nothing to do with him. A short while later, Red kills Anslo and takes off, right before the Post Office crew shows up. “He was here,” says Liz.

Aram shows Cooper the surveillance outpost, and Cooper tells Diane they’ve been watching her too. She says as of this moment, the only target on the Blacklist is Raymond Reddington. At the hospital, Ressler’s ex shows up – says she’s apparently still listed as his “next of kin.” I’m not sure where this all fits in, because it seems totally off-storyline.

Red phones Liz, says he’s “gone for a short while.” “Lizzie, I want you to know, wherever I am, whatever I’m doing, if you’re in need, I will be there.” She asks him: “Are you my father?” “No,” he says, adding, “Lizzie, be careful of your husband.”

My thoughts exactly. Tom continues to bug me. He keeps saying he wants to leave this place, have Liz leave the FBI. But … there’s just something not right about him.

And I also think Red IS her father. I think he’s just telling her he’s not in order to protect her. After all, he deals with some pretty unsavory characters who wouldn’t hesitate to put her in harm’s way in order to get him to spill info or who knows what else…

Your thoughts on this episode of “The Blacklist”? Who’s the mole on the inside? Where is Red? Leave comments below, and let’s talk about it until next week’s new episode.