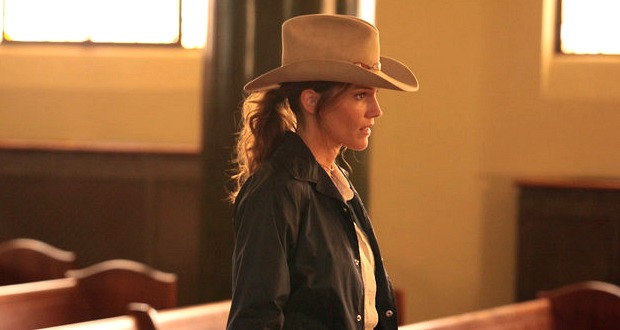 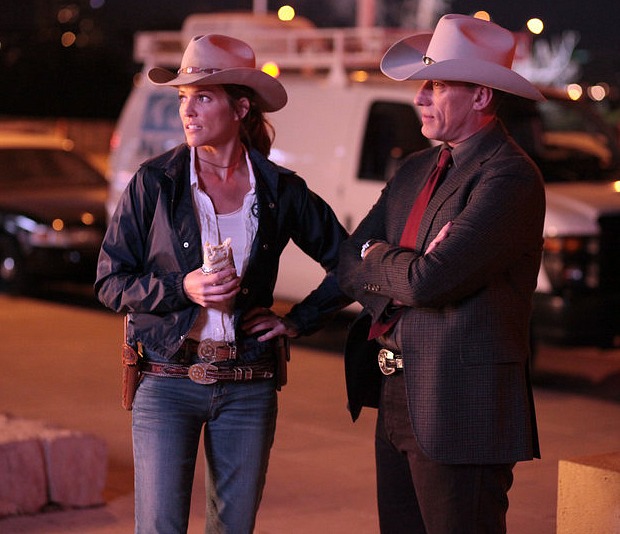 After seeing her “Battlestar Galactica” alum Katee Sackhoff score a hit with her role as Deputy Sheriff Victoria Moretti on A & E’s “Longmire,” Tricia Helfer decided she might have a go in a uniform as well. Instead of being one of Absaroka County’s finest, Helfer takes on the Texas Rangers (as in the law enforcement officers, not the baseball team).

In “Killer Women,” (premiering Tues., Jan. 7, 2014 at 10/9c on ABC), Helfer plays Molly Parker, the only female Texas Ranger. In a playing field of men, many want to see her fail, but she’s determined to be the best ranger out there – male or female.

Molly’s brother, Billy (played by another “Battlestar” alum, Michael Trucco) and his wife Nessa support her all the way. Molly’s estranged husband, Jake (the handsome Jeffrey Nordling) makes her life hell, but she seeks solace in the arms of Dan Winston (the equally handsome Marc Blucas), a DEA Agent.

According to the official site of the Texas Rangers, there is only one active duty female Ranger (though it’s unclear when the page was last updated).

This show has promise and I’m a sucker for a procedural crime drama, but there are so many out there that this might get buried amongst the better ones. Of course, once they have Parker go undercover as a cliche hooker or a stripper, I’m out of there.

Here’s a thought: Have a crossover episode with Katee Sackhoff’s Deputy Moretti visiting her old college buddy in Texas and they solve a case together. That’s ratings gold!

“Killer Women” is written by Hannah Shakespeare and executive-produced by Sofía Vergara (“Modern Family”). The pilot was directed by Larry Trilling.