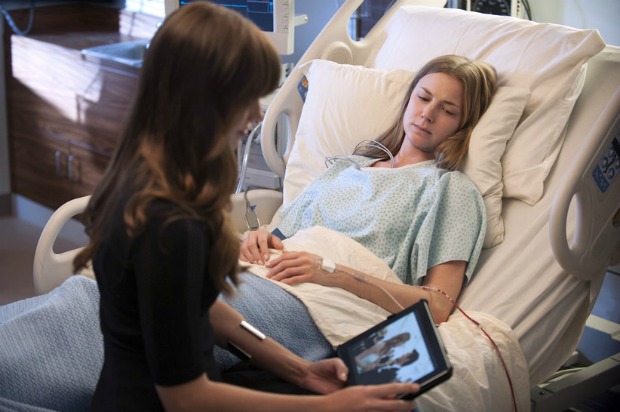 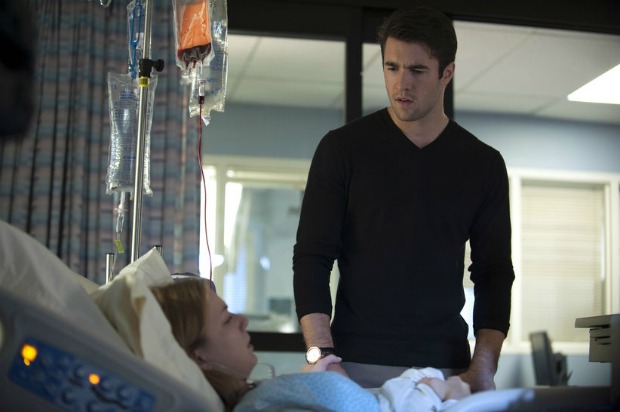 Finally we get some of our shows back! I’m not sure if I like the “Fall Season Finales” or not. I do understand why the networks do it – for the holidays and ratings, but I do miss my shows!

After seeing the previews for this latest “Revenge,” I thought that Emily was faking her amnesia, didn’t you? She’s always a step ahead of everyone, but I was wrong.

“Homecoming” was intense, to say the least. After being shot by Daniel, Emily went missing at sea. I thought for sure, it was part of the plan … which it was, but Daniel shooting her wasn’t. Emily found her way to a buoy, but couldn’t pull up her escape suitcase due to her injuries. She found her way to a fishing boat and Aiden, with Jack’s help, found her.

In the hospital, Emily woke and YES, she really did have amnesia. What a great twist! Isn’t that surprising (of course not).  The police interview the family members, but can’t determine a guilty party.

The fighting between everyone in this episode was very nasty: Victoria and Conrad, Conrad and Daniel, Victoria and Lydia, Patrick and Nolan … wow! What did you think? I was waiting for a big brawl … we did get a tiny cat fight between Victoria and Lydia – I was hoping for a Krystle Carrington vs. Alexis Carrington Colby type brawl – maybe next time.

Daniel was shocked to find out Emily was alive (yeah, because he shot her). Meanwhile, Victoria couldn’t remember what had happened after her fight with Em. She decided it best to get her attorney before answering any more questions. Good idea.

Nolan, Aiden and Jack were beside themselves with worry as to how to get into the hospital – only family was allowed. They thought the Graysons would finish Emily off. I’m sure Victoria would have if it were all possible. With Nolan’s technological expertise, Aiden got into Emily’s room, but to his horror, she was afraid of him and dispatched security. Now what? Her mind was shutting down and she needed some kind of mental connection; Jack? That was my guess.

Daniel tells his mother that she was right all along about Emily, and that he is the one who shot her. Whoa! I was surprised that he told her he was going to turn himself in (I feel sorry for Daniel). Of course, Victoria didn’t want him to. She goes to see Margaux and gets information about who was and wasn’t in the wedding photos … NO LYDIA, much to Victoria’s delight. I really don’t like Lydia … Victoria ends up telling Conrad about Daniel and that he has to get rid of Lydia. Darn.

Charlotte visits Emily and tries to make a connection through photos and conversation. Emily remembers her father, David Clarke. That really surprised Charlotte  – and me! She tells Jack what Emily said, and Jack plays dumb. Jack, Jack … we’re getting close!

Conrad and Daniel have a “big time” fight. Conrad really is despicable … although he did really seem worried when Emily was missing.

Patrick goes to Nolan’s house and sees Nolan’s tattoo, and the box – yes, the one with all of the secrets! Uh oh. Here we go! Patrick goes to his mom (and BFF) and tells her about the box and the tattoo … she shows him a photo of Emily with the same tat. Victoria has the “killer” look now. Watch out, Emily!

Last scene – Jack goes to talk to Emily. He is sweet and he gives her a necklace that belonged to the fake Amanda. As he leaves, she starts having major flashbacks – and here it comes. She remembers what happened – “Daniel shot me.”

As I said, this was a pretty intense episode with lots of verbal fighting. The preview for next week shows Victoria with the sacred box. You can only guess what will happen.

Side note: This was a text to me from my friend Liz last night (while watching the show). “I’m glad I’m not in that family.” I thought that was funny!

Please feel free to comment below. We would love to hear your thoughts on “Revenge.”