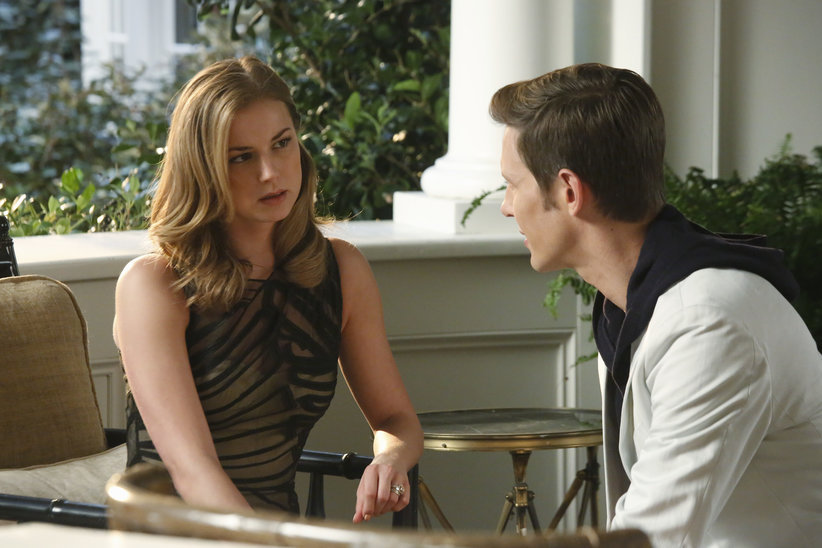 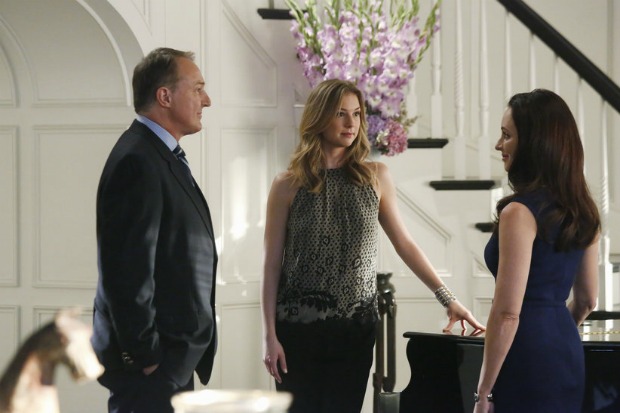 Hi everyone. I’m sorry I am so late getting this out, but I feel less guilty knowing “Revenge” isn’t returning until March 9th, at 10/9c. Can you believe it?! Another big hiatus! Ugh! Oh well, maybe I can do some catch up on old shows and take in some new ones. Any recommendations? Now to “Revenge”…

Emily awakes to find herself bleeding (I was wondering what was going on) – she had pulled her stitches out during the night. Niko appears to stitch her up and crazy as it was, Emily grabbed a hot poker iron from the fireplace and wanted Niko to cauterize her? Okay, that was a little much, right? As tough and crazy as Niko is, she refused to do it. Phew, ‘cuz I didn’t want to see that!

Nolan, still mad about Patrick’s betrayal, delivers paperwork to him about his real father – uh oh, Victoria’s in trouble. Both Patrick and Nolan seemed a little sad (more so Patrick). I don’t really want them together as a couple. Nolan needs to stay as distant from the Graysons as possible. Oh yes … but love is blind.

Margaux displays her excitement of Voulez first issue to Jack (they are sweet, aren’t they?), but is distraught to see the words she wrote had been changed for printing. Who on earth would do that? Conrad, of course! Margaux bolts to the office to find out what the heck is going on.

This is gross – Conrad confronts Emily about her relationship with Daniel, warning her that Daniel will deceive her (if he only knew). When he does, Conrad tells Emily he’ll be waiting for her at The South Fork Inn. Are you kidding me? I have to laugh at that one – although it did show them at the South Fork together later – in a dream – I think. Did anyone get that?

At the mansion, Emily goes to wake Daniel and finds him in bed with Sarah. She’s getting a taste of her own medicine, isn’t she? Daniel and Sarah seemed to be happy that she walked in on them. This reminded me of the “good ole days” of “Dallas.” Later Emily finds Sarah at the pool and tells her she needs to leave, that she doesn’t belong. “What, because I’m trash?” Sarah promptly orders a bottle of Cristal from one of the servants. Emily smiled, but maybe in a devious way?

Niko decides to crash at Nolan’s – indefinitely. Great – of course she is trying to win Aiden back … and is making a pretty good showing of it.  I can’t wait until clash of the two Joan of Arcs (Emily and Niko). That’s going to be ugly!

Patrick confronts Victoria about the information she’d been hiding from him about his father. Of course, she helps him spy on his dad later in the show. Boy does she love Patrick … in a weird sort of way? Maybe he is the only normal (?) thing in her life.

Emily invites Sarah’s mom over to Grayson Manor to help get rid of her once and for all. She doesn’t want to go, so mommy disowns her…

Daniel and Emily have a few confrontations in this episode. The worst was at the end when Daniel realized she forced Sarah to leave him. Emily tells Daniel, “We did this to each other.” Oh brother … He was so mad (and sad) that he got physical with her, pushing her onto the bed and holding her down. Before he left the room, he says “Sterilizing you was my gift to the universe.” Ouch! Wow! But come on, she deserved that one. Gulp. What did you think about that scene?

Patrick and Victoria go to “spy” on his dad. They end up at a bar. Victoria drops her purse and the guy picks it up. He had know idea who she was … and says, “Relax sweetheart.”

Later, Victoria tells Patrick the story of his father. Her neighbor (who she looked up to as a brother) raped her. While in the process he said, “Relax sweetheart.” OMG! She was barely a teen. I was sad for Patrick and if you can believe it, sad for Victoria. Things are starting to make sense – why she’s the way she is. She also tells Patrick she accepted a scholarship to Paris – it was the only way to get out of that place. She gave Patrick to a nun who would take good care of him. I keep thinking once she and Emily know the truth about each other, they will be an unstoppable team. Oh, I’d like to see that!

Jack decides to move to a home with a yard. He asks Margaux to live with him. She says yes! I really like them together, I really do. 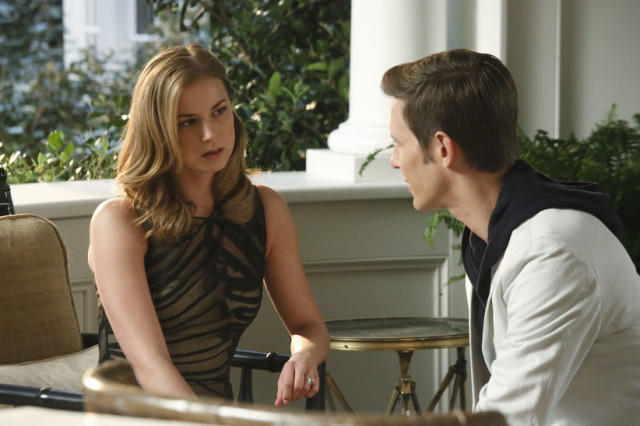 Niko, Nolan and Aiden … Aiden tricks Niko again, telling her he has a lead on the man who killed her father (the guy who killed Declan). She is bound to get him and kill him! Aiden tells her the murderer is in Moscow and he has a ticket for her to go … but he isn’t going. She wasn’t happy about that.Then later, when packing, she finds the sword that killed her father under Aiden’s bed. Aiden, I think you’re dead meat!

Patrick is sad about everything that’s happened. He paints, but then burns the painting he was working on. He’s a sad boy.

The last scene was pretty fun. A woman gets off a private jet and guess who it is? Conrad’s first wife, Mrs. Grayson #1 (Gail O’Grady). Can you imagine?!

So readers, what did you think of this episode of “Revenge”? Why do you think the ex is back? Will Aiden be killed off? Please feel free to comment.