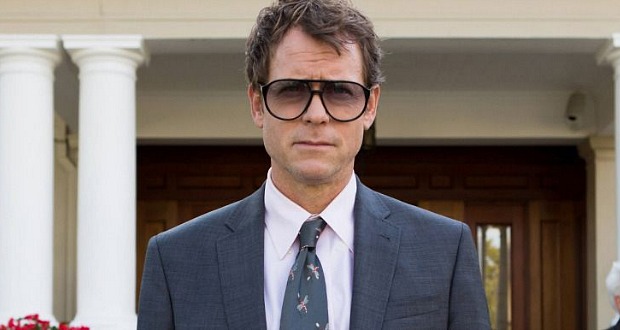 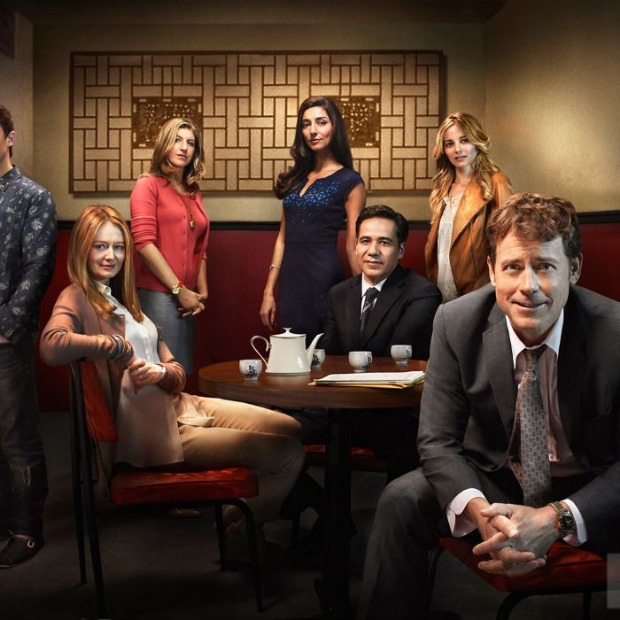 First, I love Greg Kinnear. Like Connie mentioned in her preview of “Rake,” I’ve loved him since his days on “Talk Soup.” That was a while ago.

I’ve loved him in every movie he’s been in, but the standouts are “Flash of Genius,” “The Matador,” “Little Miss Sunshine,” and “Feast of Love.”

In “Rake,” he plays an attorney named Keegan Deane with absolutely no filter. He gambles and gets in fights and drives fast and punches road signs and drives with an expired license and crashes on his best friend’s couch and gets punched by his bookie’s thugs and is basically a self-destructive deadbeat.

In addition to Keegan’s cases, the show follows his personal life, which includes escalating debt to his bookie and his liaisons with various women, including Melissa “Mikki” Partridge (Bojana Novakovic, “Drag Me To Hell”), his favorite prostitute and de-facto love interest. I see a “real” (non-paying) relationship in their future. Maybe.

Then there’s his ongoing battle with the IRS, as prosecuted by David Potter (David Harbour, “The Newsroom”), an IRS tax attorney who looks ten years younger than he is, earning him the nickname (bestowed by Keegan) “Harry” – as in “Harry Potter.” Leanne Zander (Tara Summers, “Damages”) is Keegan’s no-nonsense assistant.

Meanwhile, Keegan’s ex-wife, Maddy (Miranda Otto, Eowyn in “The Lord of the Rings” franchise), a psychologist who begrudgingly acts as his therapist. She’s also mom to their teenage son Finn (Ian Colletti, “Phoebe In Wonderland”), who already displays many of the same proclivities as his dad.

Ok, back to this week’s episode …

I couldn’t believe that Scarlet — knowing Keegan as she does — would ask him to drive her kids to school. You just know that won’t go well, and it doesn’t. First, he’s trying to drive and write at the same time. Not good, Keegan! Then, he gets pulled over and it turns out his driver’s license is expired. Bad parenting, Scarlet!

He gets to his office and discovers that a client has paid him with a giant fish in a cooler. No problem, though, because apparently the Pacific Blue Fin is worth $25K. Who knew?

In exchange for a gambling payment, Keegan gets a case defending a serial killer, a.k.a. the West Side Ripper, with Scarlet as the opposing attorney. It’s not an easy two-minute case either. It’ll take months, and the client can’t pay. Keegan wants him to plead guilty, but the guy says he isn’t guilty.

Keegan is pretty good in court, though and, as he tells the press outside the courthouse, he will not rest until “the corrupt, disgraceful, fetid body that is the Los Angeles Police Department” is held accountable for any and all wrongdoing in this case.

The murders don’t stack up. They’re all different, and the confessions are sketchy and may have been written by the police chief. Keegan figures this out, thanks to the grammatically-incorrect “should of” in some notes. Now Keegan is thinking all the previous cases might need to be re-tried. He’ll be rich, rich, I say! Oh, and he’ll also be freeing an innocent man. Well, maybe all except for one murder. Unfortunately, things don’t go as planned and all Keegan is left with is his fish, which he’s been dragging around for the entire episode.

When he goes to pick up his car, it’s been crunched into a tiny box (note to self: don’t tick off the LAPD). In return, Keegan grills up the fish for a nice backyard family scene at the end, but he left the rest of the fish in the back of a cop car.

I have high hopes for “Rake,” partly because of my adoration of Kinnear, but also because of the rest of the cast, the great writing, and the production team, which includes creator/writer Peter Duncan (he created the original Australian series upon which this one is based) and executive producers Peter Tolan (“Rescue Me”), Michael Wimer (“2012”), Richard Roxburgh (“Mission: Impossible II,” “Moulin Rouge”) and Ian Collie. Greg Kinnear, Sara Goodman and George W. Perkins are co-executive producers. Sam Raimi (“Oz the Great and Powerful,” The “Spider-Man” franchise) directed and served as an executive producer on the pilot.

“You know, you sit at this table and the general assumption is that you have the cash to get involved. That’s how adult poker works. This is what I get for playing with another lawyer. What the hell, Jerry? What the hell?”

“All any of us have at the end of the day is our dignity.”

“I’m not gonna let you kick me out, Ben, because that’s gonna make you feel bad about you, and I’m not gonna do that to my best friend.”

“It’s a sad commentary on society when a second-rate Bernie Madoff trumps a serial killer.”

“Son of a bitch is guilty. All my clients are guilty.”

“Look, I’m really busy. I’ve got a very powerful man I have to meet with later today. I’ve got some pressing financial matters. I’ve got a fish I’ve gotta get out to Arcadia. And you’re guilty.”

“Look at this thing, this is a fat bastard. I tried lugging it around in this cooler … that fish is a ten, sir. That’s a ten that you’re looking at right there.”

“You know what? You guys just lost yourself a great fish. It’s called sayonara.”

Your thoughts on “Rake”? Leave comments below.