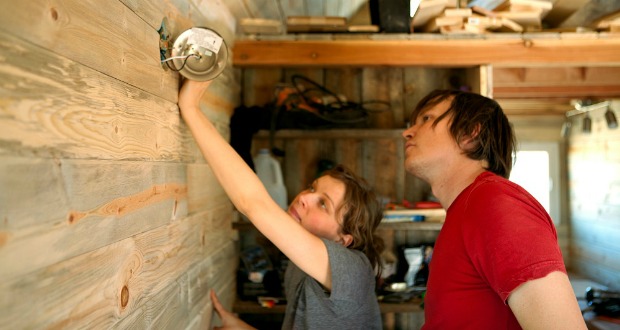 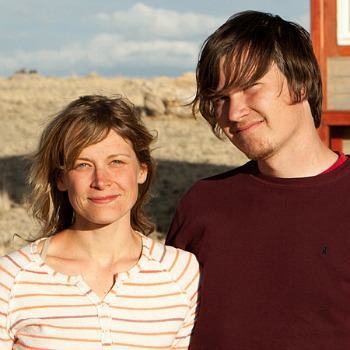 My friend Kerri Fivecoat Campbell runs a site called “Living Large in Our Little House,” so I’m always on the lookout for people living in cool little homes. I’m all about downsizing lately, and just feel like there’s too much “stuff” in my life.

Last week, I stumbled across a trailer for “Tiny, A Story About Living Small,” a documentary that looks at folks who live in small spaces. The film follows Christopher Smith, who after traveling for a decade approaches his 30th birthday and decides it’s time to plant some roots.

So he buys a 5-acre plot of land in hopes of fulfilling a lifelong dream of building a home in the mountains of Colorado. With the support of his girlfriend, Merete Mueller, he sets out to build a Tiny House from scratch, despite the fact that he has no construction experience. This sounds like the kind of thing I always do – dream big and jump in!

“Christopher’s an impulsive person, so I  wasn’t that surprised when he told me he’d put an offer down on the land,” says Merete. “I knew that owning a house in the mountains had been a lifelong dream for him. But still, I was surprised! He was still in grad school and working as a freelance graphic designer on the side. He didn’t have any savings. Christopher’s way has always been to take a leap and ﬁgure the rest out as he goes along.” Yep, that’s me, too. Check out the film’s trailer:

TINY: A Story About Living Small (Teaser Trailer) from TINY on Vimeo.

From the film’s press materials, I learned that from 1970 to 2010, the average size of a new house in America has almost doubled. But like me, many people are changing their view of what the American Dream looks like. We’re all about flexibility, financial freedom, and quality of life over quantity of space.

“Tiny Housers” live in homes smaller than the average parking space, often built on wheels to bypass building codes and zoning laws. “Tiny” takes viewers inside six of these homes stripped to their essentials, exploring the owners’ stories and the design innovations that make them work.

After purchasing the land, Christopher researched his options for building a small cabin on the plot and discovered that his county — and most counties in American — has a minimum house size included in its building codes.

“I wouldn’t have been able to build a larger house on my own, and I would have had to save up the money for a long while before I could get started,” he says. Then he remembered a magazine article he’d read years earlier about Tiny Houses, small structures built onto ﬂat-bed trailers. Because the houses are built on wheels, they count as temporary structures and local building codes do not apply. Check this one out.

He adds, “Being an environmentalist, I liked the idea of building a house that would have a very minimal impact on the land.” In his ﬁnal months of graduate school for public administration, he was daydreaming about a creative project and hoping to return to ﬁlmmaking after competing his degree. Merete, a writer by trade with a knack for recognizing a compelling story, suggested he ﬁlm himself building the house.

“I saw Christopher planning this project and knew that building the tiny house was his way of working through questions about what kind of a home he wanted to create for himself, what kind of a life he wanted to build. Questions that most people our age are wrestling with,” Merete recalls, “I realized that following his story would be a great way to explore some of these larger issues around home: how we deﬁne it and what we value most.”

Christopher agreed to take on the ﬁlm project and asked Merete to join him as a writer and producer. As the couple began tapping into the online community of people who are building and living full-time in these tiny spaces, they expanded the ﬁlm to include tours of other Tiny Houses, as well as their own. So the film includes tiny house tours from Massachusetts; Portland, Oregon; Longmont, Colorado; Olympia, Washington; and Sebastopol, California.

Here’s some stills from the film. Click the images for larger views and sharing options.

Just as Christopher taught himself to build his house from scratch using blogs, YouTube videos and countless trips to the hardware store, the couple dove into DIY indie ﬁlmmaking and learned as they went.

Christopher explains, “In the early days, I would set up a camera on a tripod and just let it roll while I was out there building by myself. That was the biggest challenge: focusing on building the house, and also thinking about how to capture that process on ﬁlm.”

They launched a successful Kickstarter campaign and built a strong following through social media and the internet, blogging and sharing photo updates of their house construction. As their following grew and they collected more information on the subject, Christopher and Merete realized that the story of the tiny house movement was larger than the simple short ﬁlm they had originally set out to capture.

“When we began this project, our goal was to make a short ﬁlm and show it at our local mountain ﬁlm festival,” Christopher explains. “But when we sat down to edit, we realized the story had outgrown our ambitions, and the ﬁlm needed to be a feature in order to touch on all the aspects of this issue that felt important to us.”

This expansion wasn’t without growing pains. Both Christopher and Merete held fulltime day jobs throughout the making of the film. Merete says, “There were plenty of moments when we didn’t know if we had the money or the energy to keep going. The highs and lows were really extreme. Being accepted to premiere the film at SXSW was definitely a high point.”

Though they had no idea what they were getting into when they first decided to build a house and a film at the same time both Christopher and Merete agree that the rewards have matched the sweat and tears.

Christopher says, “I think that not knowing how much work this would be was a blessing. We may never have started the project if we knew how big it would become. But really, all you have to do is start. Once you throw yourself in and commit to seeing it through, amazing things can happen.”

For info on screenings and the DVD release, check out the film’s official site, Facebook page and Twitter account. On their site, they also offer an e-book on “everything we wished we knew before building our tiny house!” That sounds like valuable insider info!

Are you a Tiny Houser? Would love to hear your thoughts in the comments below.