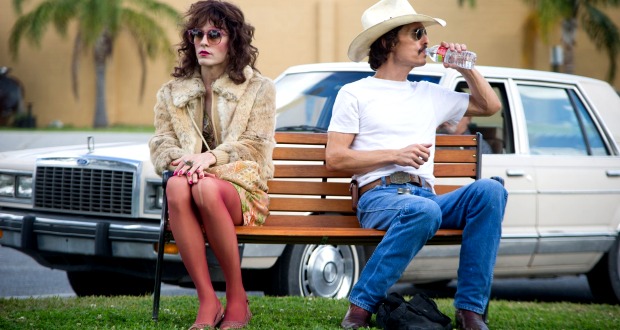 The nominations for the 86th Academy Awards were announced this week, and what do the nominees have to say? Read on for reactions from Leonardo DiCaprio, Martin Scorsese, Jared Leto, Meryl Streep and more.

“I am deeply humbled by this honor and even happier to share today with Marty, Jonah and Terry, as well as this entire cast and crew. ‘The Wolf of Wall Street’ has been a passion project of mine, and I found the role to be one of the most challenging and rewarding of my career.  Congratulations to all of my fellow nominees, and thank you to the Academy for this extraordinary recognition.” – Leonardo DiCaprio, “The Wolf of Wall Street”

“We knew that we were taking a risk with ‘The Wolf of Wall Street’ – by telling the story of Jordan Belfort and Stratton-Oakmont. I’m so pleased to see the picture recognized by the Academy, along with all the hard work, by so many talented people, that it took to bring it to the screen.” – Martin Scorsese, on his nomination for Best Picture, “The Wolf of Wall Street”

“Despite the fact of what I do for a living, I am having difficulty finding the words to express how honored I am to be nominated. Martin Scorsese is the reason I wanted to become a screenwriter in the first place; having my name included with his on this list is more than I could ever have hoped for. I’m equally thrilled for Leo, Jonah, and our entire cast and crew who’ve been honored with a best picture nomination for their incredible work.” – Terence Winter, “The Wolf of Wall Street”

“This is just the loveliest news. I’m so happy for everybody involved, and so proud to have been part of the wonderful experience that Philomena has been.” – Judy Dench, on her nomination for Best Actress, “Philomena”

“For decades, I kept the story of my son mine and mine alone. To be able to share it today with the world, with no less than the beautiful, brilliant actors and filmmakers I had at my side, is truly a blessing. My heartfelt thanks goes to the entire team who made this movie a reality, and to those who helped to nominate it … what a humbling acknowledgment.” – The Real Philomena Lee

“I can’t thank the Academy enough for recognizing my work on ‘Philomena.’ The film is such a gem! Philomena Lee’s story, beautifully conveyed by Judi Dench and Steve Coogan, is universal, and it deeply moved me when I first saw it.  Stephen Frears is such a master at directing drama with a subtle touch. I have been extremely lucky to work with him several times beginning first with ‘The Queen.’ I am very proud of being part of Philomena’s creative team.” – Alexandre Desplat, Best Original Score for “Philomena”

“This was certainly a once in a lifetime experience, and the recognition from it is an absolutely thrilling bonus. I simply could not be more excited right now.” – Julia Roberts, Best Supporting Actress, “August: Osage County”

“I am so happy for our film that Julia and I have been nominated. We are both so proud of ‘August: Osage County.’ This honor from the Academy, for which we are truly grateful, will help bring attention to our film from audiences across the country, which is thrilling.” – Meryl Streep, “August: Osage County”

“I am honored and grateful for this nomination. I love working in an industry and craft that inspires me daily and allows me to tell stories that translate humanities and move people. I share this with the entire ‘Dallas Buyers Club’ family of filmmakers, cast, and crew — and the real-life Ron Woodroofs and Rayons  who continue to fight and live with dignity. Thank you.” — Matthew McConaughey, Actor in a Leading Role, “Dallas Buyers Club”

“I am absolutely blown away by this incredible nomination. I never in my life thought I would have the opportunity to even write these words. Thank you so much to all my fellow AMPAS acting branch members for this honor. Today you not only honor me, but also all those around the world living with AIDS and all those we have lost to this disease. Thank you for recognizing them and recognizing their struggle through ‘Dallas Buyers Club.’ This was a fascinating story told by a group of incredibly passionate and committed filmmakers who wanted to create something special and shine a light on a unique and important story. I’m proud to be a part of this celebration and so very grateful to you all. A huge congratulations to Matthew McConaughey, Robbie Brenner, Rachel Winter, Craig Borten, Melisa Wallack, Jean-Marc Vallée, Martin Pensa, Adruitha Lee, and Robin Mathews.” — Jared Leto, Actor in a Supporting Role, “Dallas Buyers Club”

“After a journey of two decades to bring ‘Dallas Buyers Club’ to the screen, receiving an Oscar nomination in the Best Picture category is both an honor and an incredible milestone. This nomination — and those of Matthew, Jared, Craig & Melisa, and our editing and makeup/hair artisans — is an amazing victory for the entire team led by our director Jean-Marc Vallée, who worked so hard to show the world Ron Woodroof’s  inspirational  story, which still resonates today. We are humbled and thrilled that the Academy has recognized our work as producers, and we thank the AMPAS Members.” –– Robbie Brenner & Rachel Winter (Producers), Motion Picture of the Year, “Dallas Buyers Club”

“What a beautiful way to continue the incredible adventure that has been ‘Dallas Buyers Club.’ My collaborators and I have had an amazing time making this film. Today we all share a collective sense of pride as we have had the opportunity to spotlight a part of history that’s both beautiful and sometimes painful to remember, and been able to tell a story which has touched the hearts of many.” – Jean-Marc Vallée (Director), Motion Picture of the Year, “Dallas Buyers Club”

“We are stunned and honored. What a perfect culmination to such an amazing 20-year journey. Thank you, members of the Academy.” – Craig Borten & Melisa Wallack, Original Screenplay, “Dallas Buyers Club”

“I am beside myself with excitement to receive my first Academy Award nomination! ‘Dallas Buyers Club’ was the little movie that could, and did. My research for this film came straight out of my 1980s appointment book from my old salon in the South. Later, I had to run over that wig of Rayon’s at least a dozen times with my car to make it look right for her. I want to thank Matthew McConaghey and Jared Leto for ‘going there’ with me, and I want to thank our director Jean-Marc Vallée for believing in me, my work, and all my efforts to bring his vision to life. And, thank you, Academy members!” – -Adruitha Lee, Makeup & Hairstyling, “Dallas Buyers Club”

“I am so grateful to the Academy. This is such a huge honor and surprise. I love animated films … I have since I was a kid, and working with Chris Meledandri, the Illumination team and Universal Pictures was one of the most memorable experiences I’ve ever had.  What can I say … I’m HAPPY!” – Pharrell Williams,” Best Original Song, “Happy,” “Despicable Me 2”

“We are humbled and honored that ‘Ordinary Love’ has been nominated for an Oscar … it was a privilege to be asked to write a song for this extraordinary film, ‘Mandela: Long Walk To Freedom,’ and to help tell this extraordinary love story. We have been working for this great man since we were teenagers, and for our song to be recognized in this way by the Academy is beyond our wildest teenage dreams.” – U2, “Mandela: Long Walk to Freedom”

“I’m so pleased to learn that the score from ‘The Book Thief’  has been nominated by the Academy Music Branch.  Working with director Brian Percival and his brilliant cast was an absolute joy, and I’m gratified that the Academy has chosen to recognize this very special film.” – John Williams, “The Book Thief”

“Thank you, Academy! I’m so thrilled about this nomination. It’s amazing news for the film. I’m very proud of the collaboration with Wong Kar Wai during this most beautiful journey, shot over three years in China. Kar Wai gave me the opportunity to express a visual language with a lot of passion and respect.” – Philippe Le Sourd, Best Cinematography, “The Grandmaster”

“What an honor that Stephen Prouty got nominated for best makeup and hairstyling for ‘Jackass Presents Bad Grandpa.’  Am I as stunned as everyone else we didn’t get the nod for best picture? Well, of course, duh, but I won’t let that take away from my happiness for Steve, Tony Gardner, and our whole makeup team. Wahoo!” – Johnny Knoxville, “Jackass Presents: Bad Grandpa”

Have your own reactions? Leave them in the comments below!