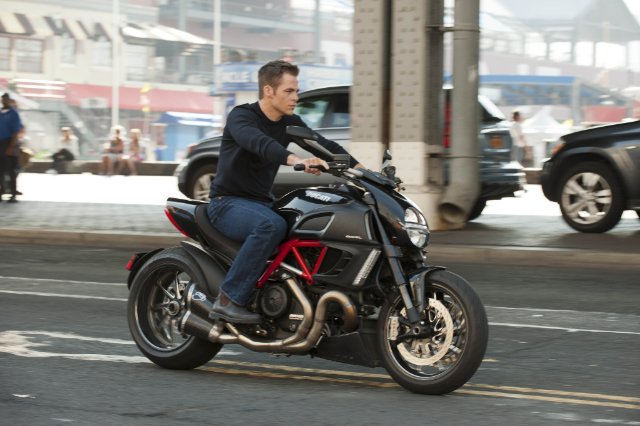 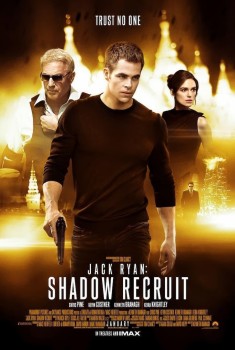 SYNOPSIS: Based on the characters created by author Tom Clancy, “Jack Ryan: Shadow Recruit” stars Chris Pine as a young covert CIA analyst who uncovers a Russian plot to crash the U.S. economy with a terrorist attack.

REVIEW: Director Kenneth Branagh, along with writers Adam Cozad and David Knoepp, re-imagine and update the origin story for Jack Ryan in the latest incarnation of Tom Clancy’s classic and iconic hero.

“Jack Ryan: Shadow Recruit” stars Chris Pine in the lead role, taking over from Ben Affleck, Harrison Ford and Alec Baldwin (who originated the role in 1990’s “The Hunt for Red October”).

In Clancy’s novels, Jack Ryan would now be able to collect on Social Security in 2014, so to freshen up the character and update it (so the franchise could continue), the film now sets Ryan in current day as it follows him briefly through college and the events that led him onto his path with the CIA.

A young 20-something Ryan is in college in London when the 9/11 attacks happen. Seeing the planes hit the Towers is the catalyst that puts him on his path as he joins the Marines instead of finishing school. After being severely injured in a helicopter crash in Afghanistan, Ryan has to learn to walk all over again, but with the help of Cathy, a comely med student (Keira Knightley).

Thomas Harper (Kevin Costner), a CIA agent, recruits Ryan to be a financial analyst for the CIA. Fast forward ten years and we find Ryan working covertly for the CIA as an analyst with a Goldman-Sachs type firm. It is there he uncovers a Russian plot to take down the U.S. economy. Harper sends him into the field (because he’s the only one that understands the financial info, apparently) and our bookworm becomes a hero.

“Jack Ryan: Shadow Recruit” is certainly not the best of the Jack Ryan franchise. That, in my opinion, goes to “The Hunt for Red October” — but it does harken back to the original Jack Ryan film. I like the addition of Agent Harper and hope we’ll see him in future installments of the franchise.

What I liked about “The Hunt for Red October” is that it kept true to the voice of Tom Clancy. The film was a thinking (wo)man’s film. There were no high speed car chases, multiple explosions, or unrealistic fight scenes that seem to litter the “spy-adventure” genre of today.  It was a great espionage film and still holds up today, almost a quarter century later! Plus, you get Sean Connery AND Alec Baldwin AND Sam Neill for eye candy for almost two hours. Do you need more?

While it was amusing to watch fellow Brits Kenneth Branagh and Keira Knightley sporting accents not of their own (Branagh as a Russian, Knightley as an American), the two seemed to have more chemistry opposite each other than Knightley and Pine, who are supposed to be lovers and soulmates (and torchholders for the Jack Ryan franchise if all goes well). Perhaps, they just didn’t get enough screentime to properly establish their relationship or perhaps, they are both too good-looking to pull off that everyman/everywoman vibe. I might have to go with the latter.

Like I said, it wasn’t the best in the franchise, but I’d probably go see the next one if it stars Chris Pine as Jack Ryan.