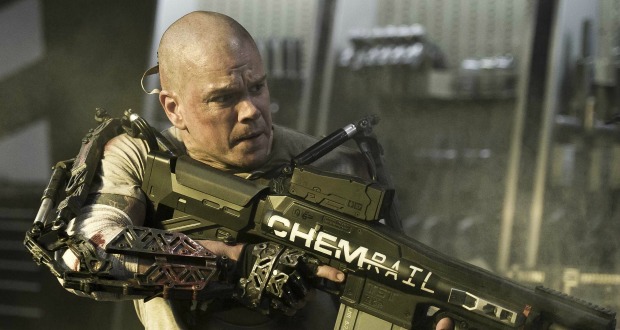 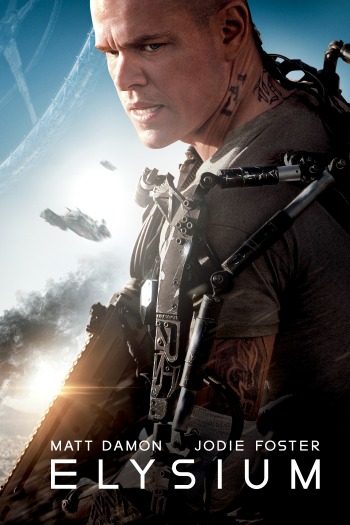 SYNOPSIS: It’s the year 2154, and the very wealthy live on a man-made space station known as Elysium, while the rest of the population resides on an apocalyptic Earth. But one man takes on a mission that could bring equality to the polarized worlds.

REVIEW: If there’s one thing I love better than Matt Damon, it’s Matt Damon with a shaved head toting a giant weapon across an apocalyptic earth and saving humankind in the process. Ok, maybe not the weapon so much. I’m averse to weapons in movies these days, but “Elysium” packs a sci-fi thriller punch.

I don’t ordinarily love movies about the apocalypse, unless they’re set in the distant future in a world that resembles nothing like our current world. Movies like “The Road,” John Hillcoat’s adaptation of Cormac McCarthy’s Pulitzer Prize-winning novel, are just depressing. I’m still emotionally shattered over that movie, and I saw it five years ago. Poor Viggo Mortensen and his son wandering across the country doing whatever they can to survive after a bomb decimates the earth … that’s the sort of thing you can envision happening – and maybe in the not so distant future. I don’t like to think about that.

But movies like “Elysium” and that other Neill Blomkamp sci-fi thriller – 2009’s “District 9” – those are far enough removed from our everyday life that I can just sit back and be amazed at the visual effects. In fact, at this writing, “Elysium” is still a contender for a Visual Effects Oscar. We’ll see how that pans out. It really is a beautifully shot film. Cinematographer Trent Opaloch, who also worked on “District 9” and Blomkamp’s upcoming 2015 film “Chappie,” earned his salary on this one.

“Elysium” takes place in the year 2154, and the earth is a mess. Overpopulation and other problems have forced the very wealthy to flee to a space station called Elysium. On the surface, this wheel in the sky is a utopian paradise, filled with fresh air, neatly manicured lawns, and everything a person could ever want.

In a nod to our current debates over universal health care, Elysium also features “med bays” that can heal any human illness. Can you imagine? ANY illness. Even cancer. But the poor folks on Earth have no such care and can never afford the trip. Illegal flights are immediately shot down, perhaps a nod to another current-day issue — immigration.

After a radiation accident on the job, the scrappy and good-natured Max (Matt Damon) is determined to find a way to Elysium to heal himself. In exchange for a coveted ticket, he agrees to a dangerous job and winds up with information that could change the entire structure of Elysium. Unfortunately, his childhood love (Alice Braga) and her sick daughter are also in need of help.

Ok, so Blomkamp takes a mallet and conks us over the head with issues of socioeconomic status, health care, tolerance, discrimination, immigration and the haves vs. the have nots. But he also crafts amazing footage of both the apocalyptic ruins on earth and the heavenly footage of Elysium, not to mention some rockin’ space-craft visuals and an awesome crash.

If you’ve watched any of Blomkamp’s other films, you know he loves the “realism” look, which also includes lots of shaky camera shots. If you’re averse to that, you may have to close your eyes here and there.

Look, Matt Damon could put a dress on and remake “Some Like It Hot” with pal Ben Affleck and I’d be first in line to see it (I mean, who wouldn’t, right?). But I love his dramatic roles just as much as his comedic roles, and he switches from one to the other with skillful ease.

Jodie Foster does a fine job as a militant, cold-hearted leader on Elysium, though I wish Blomkamp had fleshed out the characters played by Sharlto Copley, Diego Luna and some of the others. But there’s only so much you can do in a 109-minute film, and all in all, “Elysium” is well worth a look if you’re into sci-fi films and don’t mind a bit of preaching. 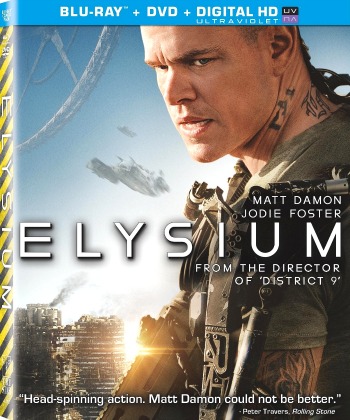 DVD/Blu-ray Features: DVD and Blu-ray special features include two featurettes. In “Collaboration: Crafting the Performances in Elysium,” we meet the cast and get insight into how they prepared for their roles. “Engineering Utopia: Creating a Society in the Sky” takes a look at the design and creation of the utopian space station.

Exclusive to Blu-ray are hours of bonus material, including an extended scene and six behind-the-scenes featurettes. Viewers get an inside look at the process of shooting the film’s (perhaps Oscar worthy) visual effects scenes, and incorporating CGI environments and vehicles into those scenes in post-production with the featurette “In Support of Story: The Visual Effects of Elysium.”

“The Technology of 2154” featurette shows filmmakers discussing the technology of Elysium, from independently functioning Droids to next-generation military technology that gives humans machine-enhanced power. “The Journey to Elysium” explores the pre-production of the film, including the first steps taken to build the future world and casting the right actors, followed by a discussion with filmmakers and cast on the journey through production, as well as a post-production diary that gives a look at the editing process, including the challenges of melding the practical shots with their CGI counterparts. The “Visions of 2154” featurette is an interactive exploration of the art and design of Elysium.

Sex/Nudity: There’s a childhood romance between the main character and a nurse, but it doesn’t go anywhere. He asks her to coffee, and she says yes, but they never get to go.

Violence/Gore: Strong sci-fi violence includes lots of fighting, shooting, stabbing and swordplay. Viewers see lots of dripping blood, and some characters die. Many robots and spaceships explode. A man violently slaps and kidnaps a woman and her sick daughter to get information out of her. A man is shown with his face blown off. A robot cop breaks the main character’s arm. He’s also exposed to radiation and is shown feeling sick and throwing up. A gory surgery scene shows the main character having a robotic exoskeleton grafted onto his body.

Drugs/Alcohol: Some beer-drinking among people on Earth, and the main character is offered pills to take when he gets agitated (though he turns them down). On Elysium, wealthy people are shown sipping champagne.

Which Kids Will Like It? Kids 15 and older who like sci-fi thrillers or Matt Damon movies. The tone is similar to director Neill Blomkamp’s 2009 sci-fi thriller “District 9.”

Will Parents Like It? “Elysium” is a well-made film, but takes a heavy hand at current day issues like universal health care, tolerance, socioeconomic divides and immigration.

Your turn! Rate “Elysium”, and leave thoughts in the comments below.
[review]