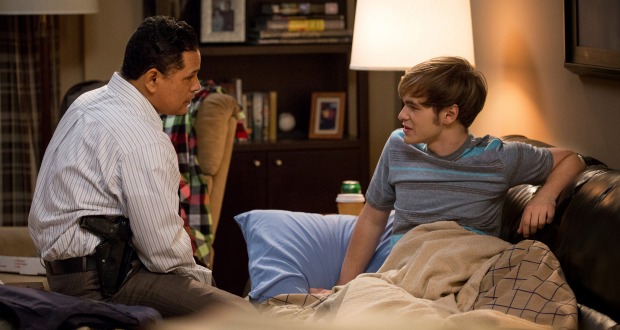 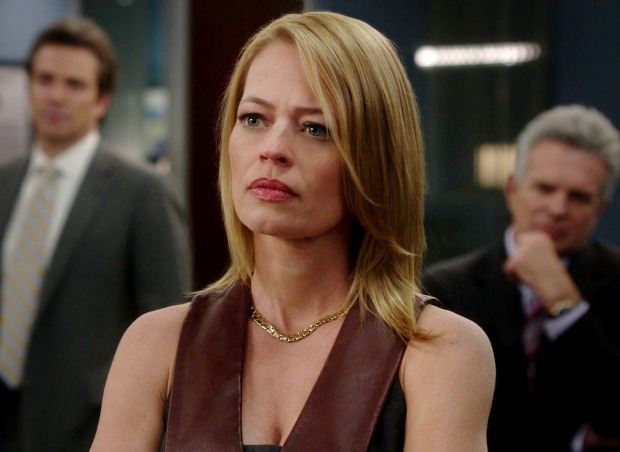 The season two finale of “Major Crimes” finally brings some resolution to the issue that’s been plaguing Rusty and Sharon for the past two seasons. But Rusty isn’t sure he’s worthy of continuing to live with her. He thinks Sharon might be too ashamed to want him there. Has he learned nothing of this woman’s open heart?

The episode begins with Rusty’s nightmare – a flashback to being chased and thwacked with a shovel. Then he wakes up on that plastic-covered couch with creepy Wade Weller hovering over him with a knife. But that’s a nightmare too. He really wakes up in the Provenza Safe House.

Meanwhile, Phillip Stroh’s attorney, Linda Rothman (a devious Jeri Ryan) delivers an envelope with six names of boys who’d disappeared and/or were killed, giving Sharon something to work with. Rusty goes into the court to give testimony. DDA Rios questions Rusty, who explains that his father signed off his parental rights last year, and his mother ran off with her boyfriend. He explains how he hustled to survive on the streets – engaging in acts of sex for hire with men who picked him up on the street.

Sharon and crew grill Ryan Mills’ mother, who says she has no idea where her son is. She’s up for parole in five years and might be willing to spill some info.  She needed heroin and a place to stay, and her son – who was 13 at the time – slept with Henry, who gave her $20K to start her life over in San Francisco without Ryan. When she came back, Henry had moved away and took Ryan with him. That would make Ryan 29 now.  She officially gets the Bad Parenting Award.

Cut to Ryan telling friend Tyler he has to leave. He explains that he had to do a favor for a guy he owed, but he couldn’t get it done. Tyler wants to go with him. Flash back to the 911 call from Rusty when he’s nearly killed with the shove.

Rothman grills Rusty about the lies he told regarding sex for money. And how many other lies did he tell? Did he lie about being gay? Rios immediately cuts Rothman off and says this is irrelevant.

Sharon and crew investigate the kids’ center, and Sharon realizes that “Wade Weller” is the guy. Cut to him grabbing some money out of a cooler; the money is underneath packages of plastic sofa covers. He stuffs a gun and a knife into a duffle bag. Tyler makes a joke about what Wade does with his victims. “No, I wrap them up in plastic sofa covers and bury them in the back yard,” says Wade. Run, Tyler, run!

In court, Rusty admits there was one more lie he told Sharon – about the threatening letters he received. Rios says, “I think we’ve covered everything.”

In a mad chase to nab Wade – who’s now in a car with Tyler – Sharon and crew are in hot pursuit and issue an amber alert, which is immediately sent to cellphones everywhere. Wade tells Tyler to get down, then grabs the duffle bag and tries to run. The cops corner him, and Provenza shoots him in the forehead. “Last time I qualified with my weapon, I scored a perfect target,” he says.

End scene: Provenza says he thinks he’ll be cleared, as long as Sharon’s report matches his. “It will,” she says. Rusty thanks Sharon for everything she’s done, but he doesn’t think she wants him living with her anymore. He played chess with that Wade guy, and in some ways, he’s just like him. “I’m exactly like him … and I can’t fix it,” he weeps.

“Rusty, what you are is who I love, and all of you is coming home,” she says. Awww… some people think this was Rusty’s way of saying he’s gay. I disagree. I think he just feels shame for what he had to do to survive on the streets.

New “Major Crimes” episodes this summer! I can’t wait to see how they fit Rusty into the story now. Maybe he’ll have some official duties at the department. And do you think he was admitting that he’s gay in that end scene? Leave thoughts below.