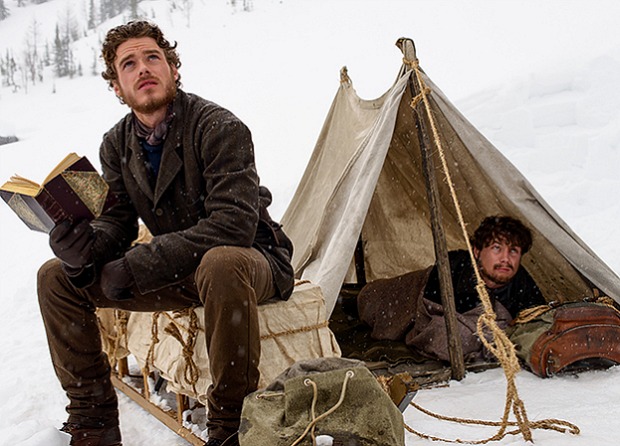 “Klondike,” set during a little known but fascinating period of history — the 1890’s gold rush in the Yukon wilderness in Canada, where hundreds of thousands of desperate and adventurous men came seeking fortunes — is the Discovery Channel’s first scripted miniseries. Only a few survived the treacherous journey and even less found gold, and it’s all fully realized in the six-hour epic, which will air on three consecutive days beginning tonight at 8 p.m. ET. Check out the official site here.

Richard Madden, nicely recovered from being killed off in last season’s “Game of Thrones” and soon to be seen as Prince Charming in Kenneth Branagh’s “Cinderella,” and Abbie Cornish, from “Sucker Punch” and to appear in the upcoming “RoboCop,” headline an all-star cast. Other cast members include Sam Shepard, Conor Leslie, Augustus Prew, Ian Hart, Johnny Simmons (as Jack London) and Tim Roth.

Ridley Scott is an executive producer of the production, which is beautifully photographed with exquisite period detail and high production values. It looks very expensive. The series is based on the fact-based book by Charlotte Gray, “Gold Diggers: Striking It Rich in the Klondike

Last week the Discovery Channel celebrated what will no doubt be the beginning of many such productions, with a splashy premiere at Best Buy Theater on 44th Street in NYC on Jan. 16, 2014. My favorite scene in “Klondike” features the hero in the wild surrounded by hungry wolves, so I especially liked the little stuffed animal wolf placed on every seat in the theater.

The lavish afterparty was across the street at the Discovery Center, which was recreated to look like the frontier town of Dawson, where most of the story of “Klondike” takes place. The party featured women in corsets dancing on benches and men dressed in period costumes singing and strumming guitars. There was plenty of top-drawer liquor and fine food, including filet mignon at the buffet table and Klondike bars for dessert.

Johnny Simmons, who plays Jack London, told me on the red carpet that he prepared for the role by reading London’s books and found a manual by the adventure novelist where he shared his thoughts. As for transforming himself physically, “I got to grow out my beard. I got to have some jacked up teeth. I got to loose some weight. I don’t know how hard it is as much as it is time consuming,” he said. “I fortunately had a good deal of lead-in time going into it, so I got to every day kind of chip away at and look for hooks as to who Jack London is or who my impression of who he was.”

Simmons was born in Alabama and raised in Texas, so as a Southern boy, it must have been rough shooting in the Alberta cold.

“It was tough,” he admitted. “I hate the cold but as an actor, it’s very nice because you get to experience what your character went through. You aren’t on the soundstage at 70 degrees and you’re faking like you’re cold. You’re really freezing, so it’s a nice benefit for me.”

My favorite character in the show is Belinda Mulrooney, played by Abbie Cornish, who is unrecognizable in dark hair and a Canadian accent. Mulrooney, based on a real-life woman, is a tough talking, shrewd and ambitious businesswomen, who seems to outsmart the men.

On the red carpet, Cornish, who wore long dangling diamond earrings, and whose blonde tresses were styled into a low chignon, looked Grace Kelly elegant. She told me that working in the harsh Canadian weather conditions made the production more realistic. She got lots of love looks from the Canadian journalists after she explained how much she liked shooting in Canada, where she also filmed “Sucker Punch” and the upcoming “RoboCop.”

I asked about her look in “Klondike,” and how her big, black hair and leather garb got her into the role of Belinda, who she described as “a warrior who could override her emotions.”

“For me, because I have blond hair, to put on a wig that is dark and with this long hair, you’re steeping into this other character in so many ways in regards to their clothes, in regards to the way they look. There were small things that the makeup ladies did, you know, very small things that you don’t really notice, but they changed the shape of my eyes a little bit and darkened my eyebrows and as soon as that wig went on, I was Belinda.”

There’s a sexual undercurrent in the scenes between Richard Madden and Abbie Cornish, so we’re expecting a romantic interlude. Madden, who is charming and handsome, attended the afterparty with his parents. They mixed and mingled and partied until midnight.

Are you watching “Klondike”? Leave thoughts on the series below, and click on the images for larger views and sharing options.