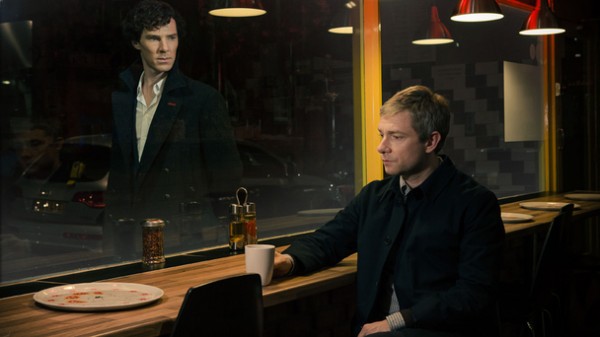 What’s on TV tonight? New episodes of “Downton Abbey,” “Revenge,” “Alaska: The Last Frontier,” “Girls,” “Shameless,” “House of Lies” and more. Also, “True Detective,” a Season 2 preview of “The Following,” the Season 1 (Series, perhaps?) finale of “Betrayal,” and the Season 3 premiere of “Sherlock”!

Beachfront Bargain Hunt | HGTV
An Iowa Couple Looks for a Beach Home Where the Family Can Meet
Teachers from Iowa search for a $350,000 summer place along Manasota Key, Fla.

Guy’s Grocery Games | FOOD
Cart Wars
The first challenge is to prepare tacos, but tortillas and ground beef are out of stock. Also: sandwiches made with frozen food; and seafood dishes featuring five ingredients or less.

The Bachelor: Bachelor Love Stories | ABC
Successful past couples from “The Bachelor” and “The Bachelorette” share details about their romantic relationships. Included: Desiree Hartsock and Chris Siegfried; Ashley Hebert and J.P. Rosenbaum; Jason and Molly (Malaney) Mesnick; and Ryan and Trista (Rehn) Sutter. Also: a look ahead to the Jan. 26 nuptials of Sean Lowe and Catherine Giudici.

The Real Housewives of Atlanta | BRAVO
Sour Grapes, Sour Peaches
NeNe visits Porsha to mend their friendship in the wake of a showdown. Elsewhere, Cynthia and Peter hear shocking news about Kandi’s fiancé; Kenya hosts a family dinner; and the ladies visit a vineyard, but the trip takes a sour turn.

Beachfront Bargain Hunt | HGTV
A Louisiana Family Scours Johnson Bayou for a Real Vacation Home
The owners of an air conditioning company have $150,000 for a secluded escape along the gulf coast of Johnson Bayou in Louisiana.

Alaska: The Last Frontier | DSC
Circle of Life
Atz Lee and Eivin hunt deer on a remote island; Charlotte scrambles to save a cow; Eve struggles with chores while Eivin is away; and Atz cleans his chimney.

Ax Men | HIST
Logger Down
A turf war breaks out between Rygaard and Oakes in the Pacific Northwest; an accident sidelines a Papac crew member.

Keeping Up With the Kardashians | E!
Loving & Letting Go
Kris and Bruce make important decisions about their future together; at the same time, Khloe deals with changes in her relationship with Lamar.

Revenge | ABC
Hatred
Tension between Emily and Daniel escalates and Emily refuses to back down, but her instability makes her vulnerable.

Shameless | SHOe
My Oldest Daughter
Fiona is involved in a road rage incident that damages a company car and leads her to tell a lie about how it happened. Meanwhile, Lip struggles in school and with the ladies.

Sister Wives | TLC
While the Wives Are Away…
The wives take a road trip to San Francisco, where they work on their relationships by shopping for dresses for their commitment celebration. Meanwhile, Kody stays at home with all 17 kids.

True Detective | HBOe
Seeing Things
Pressure to land a suspect in the Lange murder brings a warning from Quesada that Hart and Cohle might be replaced by a new task force, but they lobby for extra time to investigate a rural brothel and a burned-out church.

#RichKids of Beverly Hills | E!
#welcometoBH
A reality series following a group of young people born into wealthy families offers a glimpse of what they do with their privileged lives in Beverly Hills. First up: A controversial topic threatens to ruin a charity event being organized by Dorothy and Morgan.

Betrayal | ABC | starts at: 10:01
“…A better place.”
In the Season 1 finale, Sara’s survival is in doubt after being shot, which forces intense reflection by her family and Jack’s as they ponder what comes next.

Cutthroat Kitchen | FOOD
Soupsy Daisy
Cooking quesadillas proves difficult for one chef whose heat source is a 500-watt light. Also: Chicken soup is prepared on a cookie sheet; and ingredients for a fish fry come from Alton’s bait bucket.

Dude, You’re Screwed | DSC
Deadly Inferno
A survival instructor is dropped into a canyon in Utah.

Girls | HBOe
She Said OK
Hannah turns 25 at a wild party thrown by Marnie and her parents at a local bar, but the festivities are marred by an unexpected visit from Adam’s emotionally disturbed sister and Ray’s clash with Hannah’s editor over the soundtrack.

House of Lies | SHOe
Power
Marty has a confusing meeting with Roscoe’s new crush; Jeannie makes some power moves to win an account with the Department of Defense; Sarah tells Doug that she wants them to have a baby; Clyde witnesses Monica push a junior analyst a bit too far.

Island Hunters | HGTV
Looking for a Secluded Getaway in Georgia
Newlyweds from Boston search for a secluded getaway along the Georgian coast.

Masterpiece Mystery! | PBS | starts at: 9:58
Sherlock, Season 3: The Empty Hearse
Season 3 of “Sherlock” opens with “The Empty Hearse,” set two years after the events of “The Reichenbach Fall,” in which Holmes apparently died. Watson has gotten on with his life, but can’t help but to wish his old pal was still with him; and that wish just may come true when London is threatened with a terrorist attack.

The Curse of Oak Island | HIST
Voices From the Grave
Rumors of a deadly curse make their way to Rick and Marty.

Episodes | SHOe
Matt continues to fight for custody of his kids, but getting a DUI with them in the car makes the situation more difficult. Meanwhile, Sean learns that Beverly spent the night with ruggedly handsome Rob; and Carol falls under the spell of her charismatic new boss.

Looking | HBOe
Looking for Now
In the premiere of this dramedy about a trio of gay men in San Francisco, Patrick deals with news of his ex’s engagement; Agustín prepares to move in with his boyfriend; and Dom mulls reconnecting with an old flame.

The Following | FOX
Resurrection
In a special preview of Season 2, a murderous rampage occurs on the one-year anniversary of Joe Carroll’s death.