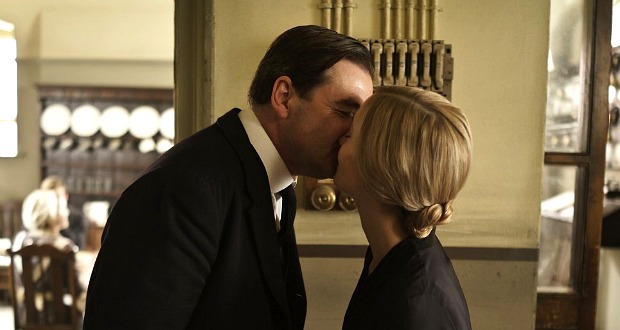 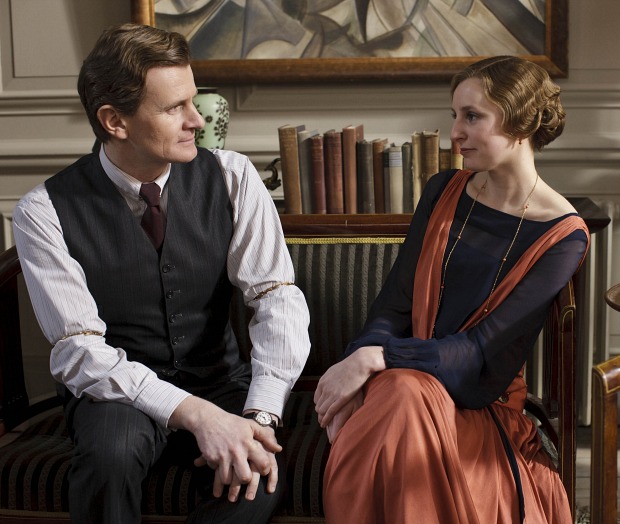 “Downton Abbey” is back! Just the thing to help us northerners (and, well, pretty much anyone in the country right now) get through this bone-chillingly cold winter. That piano music. Those mournful strings. That darkened estate.

It’s 1922, and the house is still reeling from the death of Matthew – that shocker we saw in the last episode of season three. Also putting the house into a frenzy is Miss O’Brien’s abrupt departure. Apparently, the curmudgeonly woman took a job – and was stolen away – by Robert’s first cousin, Susan MacClare, Marchioness of Flintshire. Cora is shocked, but Robert, not so much. Susan’s daughter, Rose, who’s staying at Downton, had an inkling, but thought her mother wouldn’t go through with it.

But no matter. There’s still plenty of drama to go around – both upstairs and downstairs at Downton. Starting with Mrs Hughes’ displeasure about Cora’s replacement for Mrs. O’Brien – Edna, a former maid who tried to seduce Tom.

Much of this episode centers on the depressed state of Lady Mary, who’s broken and bruised, and who can blame her? She lost her husband 50 years before his time. The staff and family do their best to get her out and about, but she’ll have none of it. “The truth is, I don’t think I’m going to be a very good mother,” she tells Violet. “Because somehow, with Matthew’s death, all the softness that he found in me seems to have dried up and drained away. Maybe it was only ever there in his imagination.”

In one of many touching scenes in this episode, Violet reminds her, “You have a straightforward choice before you. You must choose either death or life…”

She also wants nothing to do with little George either, leaving his care to Nanny West, who turns out to be quite evil. Well, at least with Sybil’s daughter. “Don’t let that chauffeur’s daughter disturb you anymore,” she tells little George. “Go back to sleep, you wicked little cross breed,” she hisses to little Sybbie.

Cora overhears and fires her immediately (thank goodness!), then calls Mrs. Hughes, telling her to find Nanny West a bed for the night and find a maid to sleep with the children. “Miss West is not to be left alone with the children, not for one minute,” Cora commands.

In other news, at first it seems that Matthew didn’t leave a will, which according to the law, means that little George suddenly owns half of Downton. There’s some controversy with Robert over whether he or Mary should work on George’s behalf.

Then when a box from Matthew’s office arrives, we learn that he wrote a letter naming Mary his soul heir – or heiress, in this case. After the lawyers take a look, the document stands as legal, and thanks to Mr. Carson’s encouragement (another touching scene), this brings Mary back into the land of the living. Didn’t you love when she showed up at the meeting – with all those men! – to take her place as half-owner of the estate? You go, Mary!

Downstairs, much excitement over the giving and receiving of mystery Valentine’s cards. Mrs. Patmore finally reveals to Daisy that SHE is the one who sent a card to the girl. She was afraid she wouldn’t get one. “I might not have a follower,” says Daisy, “but at least I have a friend.” So sweet.

Is there a sweeter couple than Mr. Bates and Anna anywhere? I think not. Those two are so cute, stealing kisses behind doors and such.

More sweetness – the scenes with Mary and Mr. Carson. When he first goes to encourage her, she’ll have none of it and says he’s overstepping his mark. “You’re letting yourself be defeated, my lady,” he says. “I’m sorry if it’s a lapse to say so, but someone has to.” And later, when she goes to apologize and he holds her close. “You have a good cry,” he says. “That’s what’s needed now. And when you’re ready, you can get to work, because you’re strong enough.” She replies, “I know I can always count on you for a draft of self-confidence whenever I start to doubt.” “And you will always find one here,” he says. Sniff. Just writing those words brings tears to my eyes again!

Violet working behind the scenes to find Mr. Moseley a job with Mrs. Shackleton – now that he’s out of a job with Matthew gone (they couldn’t find something for him at Downton?).

Mrs. Patmore worried about her job security with the arrival of a new-fangled contraption called a “mixer.”

Fun to see more London locations, especially the Criterion, where Lady Edith and new love Michael dine in glamour. It certainly seems like there’d be another option than him becoming a German citizen in order to marry Edith. “I’d become an Eskimo if it means I could marry you,” he tells Edith. “But Germany … after four years of fighting, you’d join the most hated race in Europe for me?” she asks. And then they kiss. Right in the middle of the restaurant! How scandalous!

Does anyone else see a ready-made match-up between Tom and Mary? Too soon?

Oh that Mr. Bates! Forging Mr. Moseley’s signature (“prison was an education”) to “repay” the 30 pounds he owed him from way back when. And Bates tells Anna, who felt badly about Moseley’s situation: “You’ve put up with so much that I couldn’t change. So if there is ever the slightest thing I can make better for you, I will.” Take note, men of the world. This is how to treat your ladies.

Cool train scene at the end, with Mr. Carson coming out of the fog to see his old friend Mr. Grigg – whom Isobel rescued from the Workhouse – off. And then we learn that Alice – Carson’s long-ago love – chose Grigg over him, and that’s why they were at odds. But she and Grigg separated and she’s since passed on. Grigg tells Carson: “She said, ‘Charlie Carson was the better man. I could have loved him. I did love him really. But I was a fool and couldn’t see it.'” And then Carson and Grigg shake hands and part as friends. Another touching scene.

I’ll leave you with this:

“I’m not going to drive Mary mad by interfering.” – Isobel

“It’s the job of grandmothers to interfere.” – Violet

A lot happened in this episode of “Downton Abbey,” so feel free to add thoughts and other things I missed in the comments below!