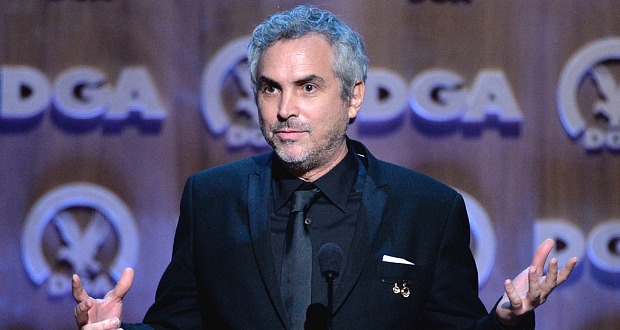 PHOTOS: Sandra Bullock at the 2014 Directors Guild of America Awards

In the last month, “Gravity” has been running a dead heat with “12 Months a Slave”; last week when the Producers Guild of America announced their awards, both movies tied for best film.

With the win Saturday, “Gravity” has pulled ahead and is the film to beat in the Oscar race.

Why do the DGA awards matter? Last year the DGA awarded Ben Affleck best director for “Argo.” The Academy hadn’t even nominated him for best director. Then Affleck’s movie went on to win best film. Of all the awards presentations, the DGA is probably the best indicator of what is to come for both best picture and best director in the Oscar race.

Ben Affleck presented the “Gravity” director with his award and said, “I hope this isn’t a tie. That would be embarrassing.”

Clearly flustered and stunned at his win, the Mexican director, who co-wrote the “Gravity” script with his son, Jonas Cuarón, said in a heavy accent, “I am humbled by it (the honor), being recognized by your peers.”

Steven Soderbergh, who has said he will no longer make feature films, won for best directing achievement for movies for television and mini-series for “Behind the Candelabra,” starring Michael Douglas and Matt Damon.

Vince Gilligan, the creator and director of “Breaking Bad,” won for best director of a dramatic television series.

Steven Soderbergh — Robert B. Aldrich Service Award
In recognition of extraordinary service to the Directors Guild of America and to its membership.

Shonda Rhimes and Betsy Beers — DGA Diversity Award
In recognition of their commitment to diversity hiring and providing jobs and opportunities to women and minorities in DGA-covered categories.

Lee Blaine — Frank Capra Achievement Award
Given to an Assistant Director or Unit Production Manager in recognition of career achievement in the industry and service to the Directors Guild of America.

Vincent DeDario — Franklin J. Schaffner Achievement Award
Given to an Associate Director or Stage Manager in recognition of career achievement in the industry and service to the Directors Guild of America.