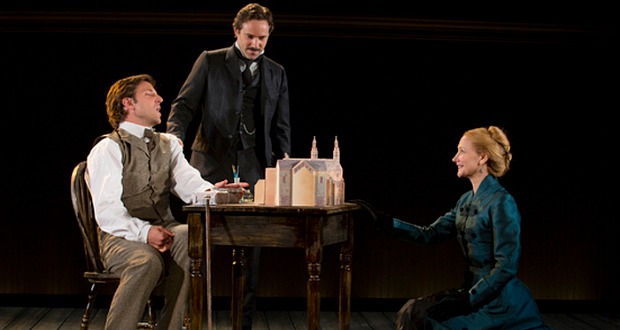 Bradley Cooper will star as the title character John Merrick in “The Elephant Man,” this fall on Broadway.

All three stars starred in the critically acclaimed 2012 Williamstown Theater Festival production, which was also directed by Scott Ellis (read Melanie Votaw’s report here). There were many reports since then of a Broadway transfer, but as Cooper’s become one of the hottest screen actors around – he was just nominated for an Oscar for best supporting actor for “American Hustle” – it didn’t seem possible he’d be able to carve out time for a theatrical run.

The story of John Merrick, from his desperate existence in a Victorian freak show where he was known as the Elephant Man, to his days as the toast of London high society, has had numerous theater, movie and television revivals.

The 1980 film directed by David Lynch received eight Academy Award nominations, including for best motion picture and for John Hurt as best actor.  Along with Hurt, other actors who have taken on the role include Philip Anglim, David Bowie and Bruce Davison. Billy Crudup was terrific in the last Broadway revival of “The Elephant Man” in 2002, which I was lucky enough to see.

The last time Cooper was on Broadway was in the 2006 underwhelming production of “Three Days of Rain,” starring Julia Roberts, who was the big draw. Paul Rudd also co-starred in the play.

Next season, Cooper will give Hugh Jackman, who arrives on Broadway to star in Jez Butterworth’s play, “The River,” some competition.

Other A-listers headed to Broadway include Bryan Cranston, Denzel Washington, James Franco, Daniel Radcliffe, Chris O’Dowd and Toni Collette. Earlier in the season, Daniel Craig and Rachel Weisz had a sold out run in Harold Pinter’s “Betrayal.” Broadway has become a star magnet and the reason audiences are willing to pay for those pricey premium tickets.