Are you looking forward to the premiere of Lifetime’s adaptation of V.C. Andrews’ Flowers in the Attic on January 18?

If the Lifetime adaptation stays fairly true to the book, we’ll be in for a nice, creepy time, that’s for sure. I still have shivery memories of reading this book as a teen (I was probably more a tween, although that word hadn’t been coined at the time). It was THE book to read back then, with the word of mouth focusing mostly on all the deliciously forbidden elements.

(I confess – I remember those delightful shivery memories of reading the book more than the book itself!) 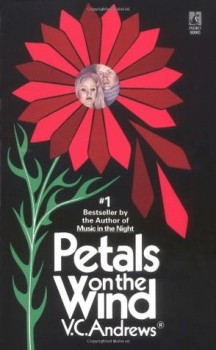 And it sounds like Lifetime is banking on “Flowers in the Attic” being a hit: it’s already announced the development of the sequel, Petals on the Wind. For those of you who didn’t read any of the sequels or (like me) have only vague memories of the sequels, here’s a snippet from the book’s summary on Goodreads:

Which, I think, gives one a pretty good idea what to expect.

According to the Hollywood Reporter, “Petals in the Wind” will take place ten years after the events in “Flowers in the Attic.” Screenwriter Kayla Alpert promises it will be “a very, juicy compelling revenge drama.”

Did you read the Flowers in the Attic series when you were a teen? Are you looking forward to the Lifetime movie adaptation? Tell us your thoughts in the comments below!