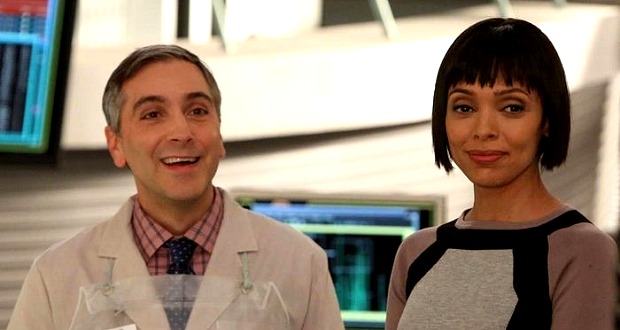 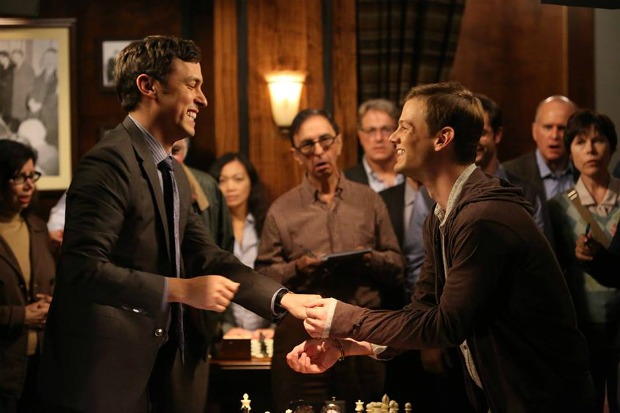 In this episode of “Bones,” the victim was found at a farm in a pig trough, dismembered and partly eaten by the pigs. Nice, what will they think of next? I guess you have to get creative when the show is in its ninth season.

The squints determine the victim is male. Turns out the farmer didn’t report the murder and fed the body to the pigs. The crazy thing about this story is that we read or hear about absurd stories like this, right?

You all remember the Canadian foot doctor, Dr. Filmore? You know, Brennan’s best friend – not. He was back to do a report on the relationship between the FBI and RCMP. We all knew how much Bones was going to like that, didn’t we? And Cam, always trying to keep the peace between them.

Angela was able to get the victim’s name from a description and ID. He was Albert Magnuson, a chess master. Sweets, not surprisingly, used to be in the chess scene and knew the name. So of course, he goes undercover to try and get some information on the victim.

Side-note – Brennan too is a very good chess player – what a surprise!

The team finds that there are several suspects – Albert’s fiancee, Suzanne, who could get a lot of money if Albert died; Albert’s ex-wife, Ingrid, who burned down his apartment after she found out about Suzanne; Tim, Suzanne’s son (very close to his mom) who was Albert’s protege (maybe he wanted to be the master); and Mr. Wakefield, who was Tim’s teacher before Albert. He tells them nobody liked Albert anyway. Hum.

At a chess tournament, a player named Ann Li tells Sweets that Olin, Albert’s biggest rival, had broken Albert’s hand. Well, well – actually, I wasn’t sure who the murderer was at this point. All had good motive. I do like when they keep us in suspense until the end, don’t you?

Booth and Sweets find evidence at Albert’s parking spot. There is blood, a broken security camera, water markings and evidence that Albert had been slammed into the wall.

They have the time when the camera went out, and also when Albert’s body was dumped; they just need to figure it out – they will.

Booth goes to a  tournament to question Olin. He says he’s innocent, and his alibi proves it. Funny thing, though (embarrassing), he tells Booth he was in jail that night because he had solicited a prostitute – who happened to be an undercover cop.  Ha ha. Funny.

Booth interrogates Ingrid next. She says she’s innocent, but did burn down his apartment to cleanse his sins. O-k-a-y.

Back at the lab, Brennan is more accepting of goofy Dr. Filmore because he has a general forensics degree … and he (they) find the cause of death was through his feet. Albert was electrocuted, which explains the watermarks, slamming against the wall, etc… 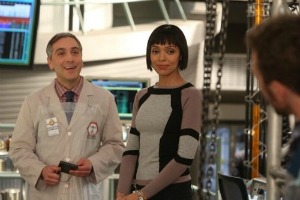 Oh gosh, a very important part of the show – Cam admitted to Angela that she was going to be honored by a magazine for outstanding women in science – and felt it would upset Brennan (who had won multiple times, it sounded like) – and it did a little.

Angela told Cam to accept it, that she deserved it. Later, Cam being so sweet, told Angela that they were a team and that if the magazine was going to honor her, it had to honor the three of them. Angela was touched.

It ends up that the magazine was going to award multiple women – BUT – wanting to increase revenue and readership, the women are to participate in a photo shoot wearing bikinis! I really believe the only one who would pose in a bikini would be Angela. No way would Brennan or Cam. Would they?

Back to the case. Sweets questions Tim. After some trickery, Tim confesses to the murder. He was trying to protect his mother from another egotistical man.

At home Booth and Brennan play one of Christine’s games – which included shots of alcohol. Loved it. It was very cute how Booth kept trying to tell Bones that he needed/wanted to be at the bikini phot0 shoot. Brennan to him, “Not gonna happen.” Very cute.

What did you think of the episode of “Bones”? Please leave comments below.