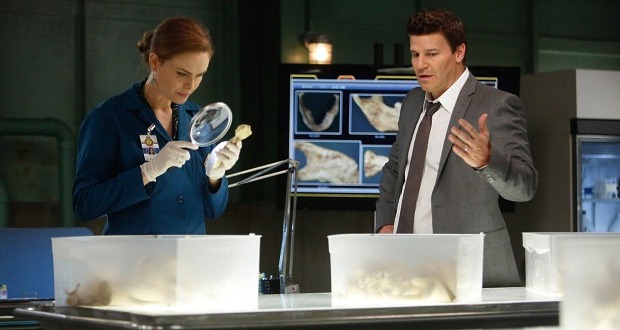 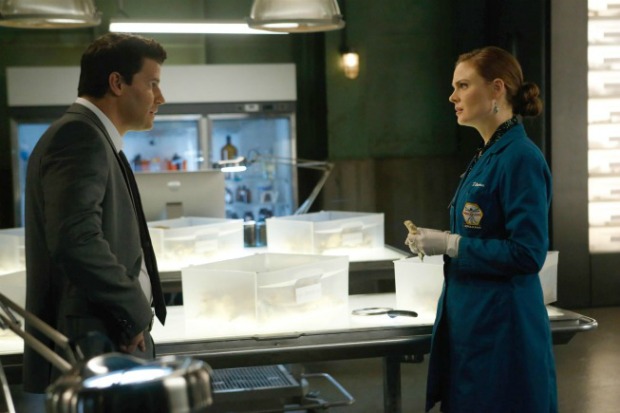 First of all, I want to make a comment on “The People’s Choice Awards.” I thought Kat Dennings and Beth Behrs did a great job, and Beth was very impressive when she did her singing montage! Who knew?

However, I get so disappointed that our show, “Bones,” doesn’t win any awards. No People’s Choice (I’m guessing the young adults are the ones voting), no Golden Globes, no Emmy, no nothin’. What gives? How can a show be on for nine seasons, have a huge 8 to 11 million fan following, and still win no awards? I don’t get it. Can someone explain it to me? I just feel bad for the actors, writers and producers … am I right?

Okay, “The Ghost in the Killer.” I was wondering when they were going to bring the serial killer that Pelant teased Brennan about to the forefront. Well, they did, and Brennan is totally engulfed.

A package is delivered to B & B’s house, and it’s a dead body, with a note that says, “Please find out what happened to me.” The woman’s body ends up being that of famous boat racer, Lana Brewster, who died 18 years ago … was it murder or an accident?

Brennan thinks murder (by the “ghost” serial killer), and everyone else is unsure – no conclusive evidence – the one thing that Brennan lives by. Tension between Bones and Booth, Bones and Cam, and Bones and Clark rise to a boiling point. Poor Bones. The “Ghost Killer” that Pelant convinced her about takes a toll on her always rational behavior – but I still have faith in her.

Booth worries about her obsession with the serial killer (that may or may not be). She has nightmares about Pelant and wants more than anything to solve the case. There are six bodies that she concentrates on, but Cam wants her to concentrate on the case at hand; leading to several arguments. Cam tells her there isn’t enough evidence to keep the case open, but Booth talks Cam into pulling strings to keep it open. Cam decides to bring Clark in to work on the case – much to Brennan’s disliking. I don’t like seeing the team fight; it’s just not like them. Rrrr.

Meanwhile, Sweets interviews Lana’s brother and realizes he was jealous of his sister. “Lana was famous, and I was a nobody…” – in the eyes of his parents. M-o-t-i-v-e. But of course, I knew better than to think her brother killed her.

Brennan and Clark put Lana’s bones together. Cam surprises them by telling them the original autopsy report was incompetent. The examiner lied about Lana being murdered. The medical examiner was paid off. Uh oh … and of course, Brennan concluded it was a murder anyway.

On a side note, Clark is confronted by Cam who wants to know why he spent the night at the lab – which is against the rules (we know Cam is a rule follower). He doesn’t tell her, but promises he will follow the rules. I was wondering what was going on … more later.

Sweets, Angela and Hodgins talk at the Royal Diner, and another boat racer’s name is brought up – Erica Stam. She and Lana hated each other. Erica was disqualified from a race after Lana reported her for cheating. That ended Erica’s career; she was banned from the sport. The motive was definitely there for her to kill Lana, so they questioned Erica, to know avail. This one’s a hard one, but of course we (you and me) think there really is a “Ghost Killer.” Yes, I believe Brennan.

Back to the case. Angela uncovers a paper trail that proves a super rich family (the McNamaras) paid off the medical examiner to the tune of $1.9 million. Unfortunately, she died, but Hodgins knows the rich family … they were friends long ago. Hodgins knew the son, Trent, but laments that he was a typical spoiled rich kid who was kicked out of several prep schools for bad behavior. (And by the way, Hodgins was a boat racer too. It’s fun hearing about his past life and the extravagance that went along with it … and he’s still so sweet and grounded. Aw).

Did I say that both Erica’s boat and Lana’s boat went down in the same way? Hum.

Sweets and Hodgins go to visit Trent and his sister at their estate. They question them and there is a motive – Trent had dated Lana. He may have killed her and then his dad shipped him off to Switzerland …? Rich people! Kidding.

Hodgins goes back to see Trent alone and tells him he knows he never had the love from his parents that he desperately wanted. He brought up a sleepover from years ago. It was sort of sad. Anyway, he tells Trent he doesn’t think he killed Lana because she gave him the love he always wanted. I agree with Hodgins on this one.

Shortly after Hodgins’ visit, Trent kills himself. Most people, including Cam think it’s an “admission of guilt.” Bones doesn’t agree because of a deep laceration to Trent’s finger that would have prevented him from pulling the trigger. Cam still thinks he did it.

Clark and Brennan … Clark opens up to Bones that he and Nora broke up. It was quite upsetting to him, and that’s why he had been at the lab all of the time and a little bit of a hot mess. She actually felt bad for him, and they have a new understanding of each other. They let things build up inside and finally release whatever it is that’s bothering them. It was a cute scene. She even called him Clark. That’s big for her.

Brennan finds another piece of evidence (so she thinks) linking Lana and Trent. The same fingernail on each of them had been ripped off. Was this the Ghost Killer?

At home, Booth makes Bones a sandwich. She says she isn’t hungry, but he tells her she is. She still thinks the killer is out there and asks him what he thinks.

But then again, Brennan is rarely wrong about anything. What do you think? They did leave it open for us, didn’t they? More to come with the Ghost Killer storyline, I’m sure of that.

What did you think of this episode of “Bones”? Brennan was more intense than usual. I like her relaxed better, but then again, this does have to do with Pelant. Any comments? Leave thoughts below.