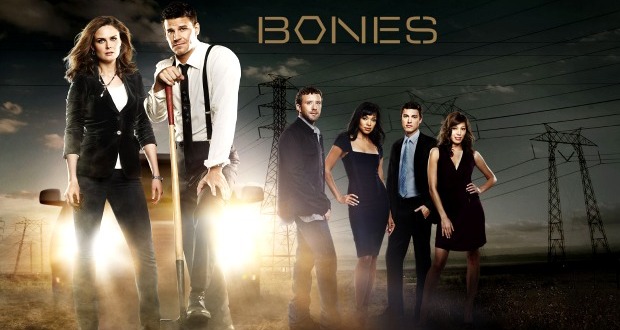 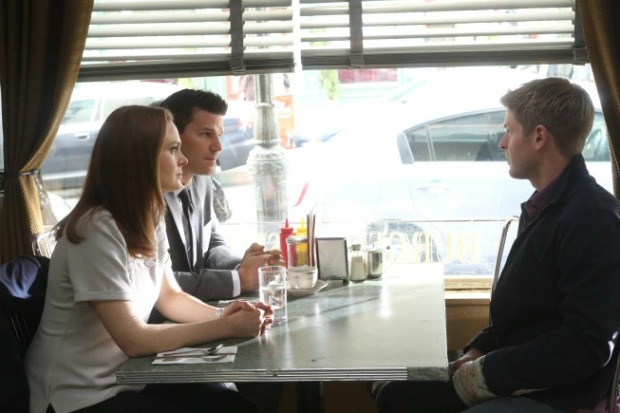 This episode of “Bones” turned out to be one of my favorites of the season. The team investigates the death of a young and struggling country singer (Colin Haynes), whose remains were found covered in coyote vomit in a shallow grave (yuck), and also about an injury that squintern Wendell Bray sustained while playing hockey. It turned out to be much more serious than originally thought, thanks to Brennan’s keen eye.

After the team does their thing and identifies the body of Colin Haynes, Booth shows Brennan a video of Wendell breaking his arm in a hockey game. Brennan looks at the video carefully and asks Booth to e-mail it to her (I knew something was wrong when she did that). She tells Booth a hit like that shouldn’t have broken his arm.

After Hodgins finds a napkin on the victim, Angela identifies the logo and Booth goes the bar where the napkin is from. He and Sweets talk to the bartender who knew Colin. He said Colin never got a break in life. They ask some questions, but don’t get anywhere.

Back at the lab, Brennan and Wendell discover that the victim had Osteomyelitis, a disease that would be very painful for him. Brennan then asks Wendell some personal questions (unlike the old Brennan) – she wanted to know if he’d ever broken his arm before or if the doctor said anything when setting it. Wendell was a little surprised and commented on her mom-like concern.

Booth and Sweets head to Colin’s apartment where they meet Kara, the building manager – of course I was suspicious of her. She tells them he was quiet and paid his rent on time. The apartment is a little rough and not well maintained. Sweets realizes what a hard time the singer must have been having. Booth picks up some old albums that are laying around. He seemed to know his country music – to Sweets surprise. Booth then found a torn check from Boar Hog Records that was written for a thousand dollars. Hum. He definitely needed money, so why tear up the check?

At the lab, Brennan shows Cam Wendell’s x ray (which she isn’t suppose to have) – Wendall has Ewing Sarcoma – bone cancer… only about 10 percent survive. What?! Cam and Brennan are clearly upset. Brennan feels a responsibility toward him… because he is one of her squints… and of course because she cares for him.

Booth and Sweets go to visit Boar Hog Records. They talk to the rough and tumble owner, Harriet (I really had my doubts about her, didn’t you?). She tells them she liked Haynes, but he didn’t sell many units. It turns out a lot of the artists signed on with Boar Hog (that name is rhetorical – I don’t like it) were not happy. It looked like a rinky dink operation, didn’t it? Oh, and it was sort of funny how Harriet flirted with Booth before he left! You had no chance, honey.

At the lab, Angela and Sweets analyze Haynes’ melodies and lyrics to try and find out more about Colin. It turns out his early songs were more upbeat and positive, while his later songs slower and more melancholy. They both liked his music and wondered why he didn’t make it big (little did they know). 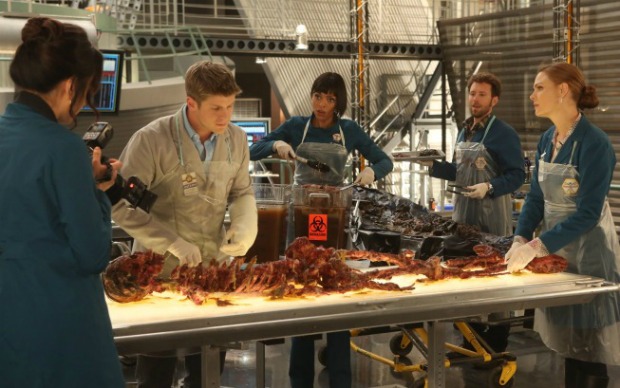 I’m sure that what most fans liked about this episode was the personal storyline about Wendell, his life-threatening disease, and the way Brennan and Booth reacted. It wasn’t any surprise that Booth was emotional – he’s that kind of guy. He was so visibly shaken when Brennan told him about the cancer and mortality rate (and Bones crying when she told him). Booth really likes Wendell – they share a love of hockey – and Wendell is one of the more “normal” quints in Booth’s eyes. It was so sad when they met Wendall to tell him – it was hard on all of them.

I really liked the scene when Wendell came to see Booth and let him know that he wasn’t going to get treatment, because it is so intense and there are no guarantees. He just wants to enjoy the life he had left. What Booth said was to him was so … loving, if you will – what a great man he was going to be, a great husband and father. He wanted him to fight! (While Brennan understood why Wendell would want to see and enjoy the world.) That was a great scene with Wendell and Booth, didn’t you think?

Back to the story … Hodgins finds particulates from a cocktail found in the remains. They find out that Kara and Colin had a date the night of the murder. Kara tells Booth and Sweets that she got mad at him and tossed her drink on him. Colin had asked her to go on a trip with him (to the Philippines), but the tickets never showed. She thought he was like all of the rest of the guys. (We find out later that the bartender was jealous and intercepted the tickets).

To all of their surprise, a Filipino guy runs out of the apartment – they catch him and it ends up that he just wanted something for the Filipino music museum. It turns out Colin was very popular there (Harriet was getting kick-backs of mucho dinero and not sharing with Colin!) – but she didn’t kill him.

Wendell (who was really impressing Bones with his work – and she let him know) and Brennan try to figure out the weapon used. They think it could have been a knife, but a shovel was also used. The knife was used to stab him, and the shovel used to knock him out to get the broken knife blade out of his body. Gross.

After Sweets found some love song written by Colin, Booth goes back to talk to Kara – she did love him and didn’t realize he loved her. It was sort of sad.

Booth and Brennan go back to question the bartender about tickets and check out the shovel. It’s clean … but Bones notices his watch and realizes it made the marks they found on Colin’s bones. Gotcha!

Wendell is shown packing his car to leave … off to see the world. Wendell.

Booth and Brennan at home – they play Colin’s music (sweet) and begin to dance, when there’s a knock on the door. It’s Wendell. He tells them he has decided to stay and fight the cancer. I’m glad, but understand the anguish in trying to decide what to do. Booth shakes his hand, and Bones gives him a heartfelt hug (you’ve come a long way, baby). Wendell leaves, and Booth and Brennan get to dance their slow dance. Very sweet.

Booth, Brennan and Cam are the only ones who know about Wendell’s condition. I’m wondering if Angela is going to feel hurt that she wasn’t told. After all, she is Brennan’s best friend and used to date Wendell. I want to see what happens there.

Again, this was one of my favorite “Bones” episodes thus far in season nine. Do you agree? Did you like the emotions that were brought out?