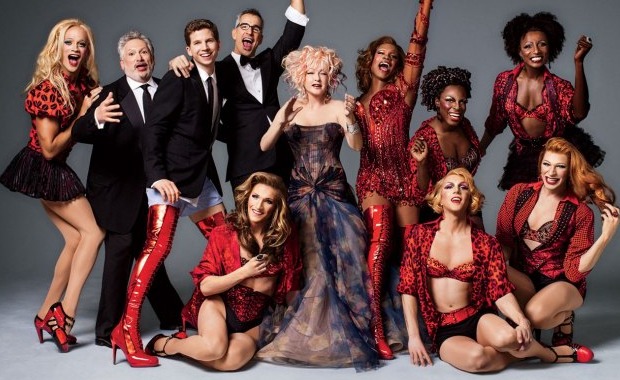 There weren’t that many new musical scores on Broadway in 2013, but there were still some excellent songs. What follows are my 12 favorites in no particular order. (Since I haven’t yet heard the music from “A Gentleman’s Guide to Love and Murder,” I was unable to include it in this list.)

“Kinky Boots” – The 2013 Tony Award winner for Best Musical with a score by Cyndi Lauper:

1. “Sex is in the Heel” – A rousing tribute to sexy high heeled boots.

2. “I’m Not My Father’s Son” – A moving duet between two different men, lamenting their difficulty in following in their fathers’ footsteps – one a regular guy and the other a drag queen. (It’s the only song remotely like it I’ve ever heard!)

3. “The History of Wrong Guys” – A hilarious number about bad dating choices.

“Matilda” – The import from the West End of London based on the book by Roald Dahl with a score by Tim Minchin:

4. “Naughty” – Matilda sings about the necessity of sometimes being “a little bit naughty.”

5. “Telly” – Matilda’s idiot father sings this funny tune about the importance of television. “All I know I learned from telly.”

“Big Fish” – An ill-fated show that I loved with a score by Andrew Lippa:

7. “Time Stops” – A gorgeous song about love at first sight.

8. “Fight the Dragons” – A tune in which a man attempts to explain who he is to his young son.

9. “I Don’t Need a Roof” – A tear-jerker in which a wife proclaims to her dying husband that all she needs is him. It’s my favorite song of the year.

“First Date” – A short musical starring Zachary Levi and Krysta Rodriguez with a score by Alan Zachary and Michael Weiner:

10. “The One” – A funny opening number in which the cast recounts their dating war stories and hopes of meeting “the one.”

11. “Bailout Song” – This recurring theme was the highlight of the show for me, as the main female character’s gay best friend calls her repeatedly to try to bail her out of her date.

“Hands On a Hardbody” – Another short-lived musical with a score by Trey Anastasio and Amanda Green:

12. “Used To Be” – A number lamenting the proliferation of chain stores.

Bonus: While not technically on Broadway, another new song from the year that I loved came from The Public Theater’s Shakespeare in the Park musical production of “Love’s Labour’s Lost.” The tune, “Love’s a Gun,” is a lyrically clever and emotionally satisfying piece by Michael Friedman, who brought us “Bloody Bloody Andrew Jackson.”

There were, of course, some great new musicals off-Broadway in 2013, including “Murder Ballad,” “Little Miss Sunshine,” and “Fun Home.” In the interest of narrowing down the choices, I haven’t included them in this list.

I look forward to songs from the new crop of musicals in 2014, such as “If/Then,” “The Bridges of Madison County,” “Bullets Over Broadway,” and “Rocky.”

Meanwhile, enjoy another bonus video below from “Big Fish” – “Fight the Dragons” sung by the great Norbert Leo Butz.