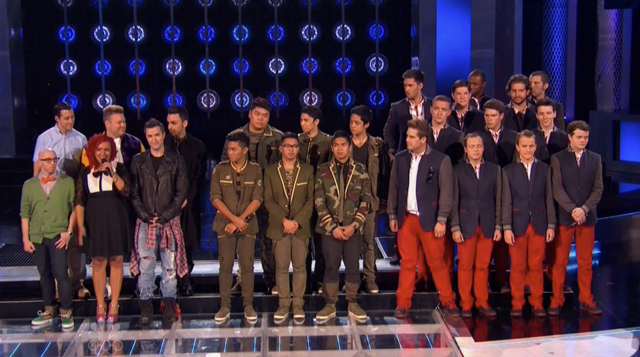 What a fantastically fun, tuneful episode of “The Sing-Off,” aca-fans! So many great performances. The six remaining groups take on movie songs, and while I’m disappointed not to hear “My Heart Will Go On,” especially once they mention it at the beginning, the songs they chose are all great and executed well.

Jewel works very hard to bring out the emotion in the contestants, especially the younger ones … and VoicePlay’s lead singer, Honey. I do think that’s part of what’s missing, part of why there isn’t another Pentatonix this season: no one has quite the same level of vocal artistry combined with vulnerability and emotion that they have.

I enjoyed all the performances in this episode—especially the Ultimate Sing-Off Challenges, of which there are three. I don’t always enjoy the challenges; in fact, the previous battles all felt a little awkward to me. There was always something strange about the one-upping that took place. But tonight, the groups collaborated—even though they’re ultimately competing against each other—and it works so much better.

It’s so great to perform with others because you learn so much from each other; it brings out qualities you didn’t know you had. I’ve also wondered how the collaboration takes place, so it’s good to see that footage. All three Ultimate Sing-Offs are great fun and really well done—so much so that two of them made my Top 5:

Home Free, Pretty Woman: I know, these guys have been in my Top 5 every week, but for really good reason: They’re great! They’re terrific singers with good use of rhythm and complicated, tight harmonies, and as I mentioned last episode, a maturity that the other groups don’t have. While they don’t have as much experience with choreography, they’re working on it—and bassist Tim’s dancing in the group number is pretty hot. And they like chick flicks! What more could I want? This competition is theirs to lose.

VoicePlay, Don’t You Forget About Me: I’m really beginning to appreciate Jewel’s judging, and I’m so glad she says that to Honey about her “playing” the emotion without really feeling it. I think that’s at least part of what I don’t like about Honey. And while she’s better this week, it still feels like an act to me. I feel the emotion and vulnerability more from the other singer, Ellie, than from Honey. I also like the arrangement a lot, but I agree with Shawn (and Ben) that it plateaus at a lower point instead of really hitting its peak. I also love, as Ben does, when they shed a piece of their high school identities to move forward as themselves. Very moving.

Ten, Skyfall: Ten didn’t make much of an impression on me in the first episode, so I tend not to think of them as a contender, but then they perform and they totally knock it out. They definitely get better and better with each performance, and this one is very powerful. While I was a little disappointed with the choice of song at first—there are better, more chart-topping Bond songs (“Live and Let Die” anyone?), “Skyfall” is a really good choice for them, and suits them very well.

AcoUstiKats vs. VoicePlay, Eye of the Tiger: Woo-hoo! The two groups work together so well and really have fun with the song, and I love the collaboration. It’s also nice to hear the blond guy in VoicePlay sing solo. They have lots of fun with the arrangement, the rhythms (love that salsa rhythm in there), and of course the choreography. Great job.

Home Free vs. The Filharmonic, I’m Alright: Brill-Yant!! This is an awesome song, but they also execute it really well. They do it up right! In fact, this is absolutely my favorite performance of the night, if not the season! So much fun, so entertaining, musically intricate, and expertly performed. They incorporate terrific rhythm changes and really play with the arrangement and the choreography. And that percussion showdown (especially Home Free’s pitched percussion)? Amahzing.  How has no one thought to do that before? In the immortal words of Jewel, “Oh my heck.” So great!

The judges have a difficult choice to make, especially with a double elimination, but they made it quickly, saving The Filharmonic and sending home VoicePlay and The AcoUstiKats. I saw the latter coming, but I’m a little surprised (but not heartbroken) about VoicePlay. I thought they’d save them.

What about you, aca-people? Are you glad VoicePlay is out, or did you also expect them to stick around longer? Who’s your pick for the winning team on “The Sing-Off”?