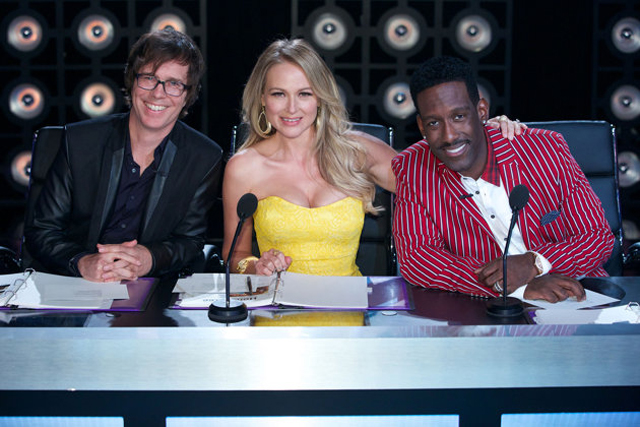 Well, it’s that time of year again. The primetime shows are on holiday break and people are getting ready for solstice celebrations, which means they’re primed for caroling. “The Sing-Off” is back for a fourth season with its “pop caroling”: ten awesome new a cappella groups are here to showcase their best vocal abilities. No instruments allowed; just voices—and some serious over-miking.

After a great medley of songs by fun., sung by the ten new competing groups, host Nick Lachey introduces the groups, who are seated along the sides looking like store windows in a mall, and then introduces the judges. I’m sorry to admit that I don’t love Nick. There’s something very phony about his hosting. But the judges are all great, including new judge, Jewel. She, Ben Folds, and Shawn Stockman all have great constructive criticism and smart insights, as well as personality. I especially love Ben Folds, and the serious concentration in his facial expressions when he’s groovin’ to the music.

Without further ado, we’ll get right into my Top 5 performances of the night:

Vocal Rush, Bottom of the River: This high school group from Oakland was pretty tight and clean with a mature sound, especially for being so young. And of course I loved their stepping, though it caused them to get slightly ahead of the beat. They primarily used “natural,” or classic percussion to supplement their sound: foot stomps and handclaps, with a little beat-boxing for good measure. They chose a great song and featured a good blended sound with clean harmonies.

Home Free, Cruise: I’m generally not a fan of country music, but their singing it a cappella made me forget (at least a little) that it was country. My biggest beef with country is the twang, and these guys didn’t really have that. Plus, they were great. Tight harmonies, nice vocal quality, and that bass! A true bass voice that rocked me to my core (aka, “my butt”). Plus they were cute.

Street Corner Renaissance, What Makes You Beautiful: These five older gentlemen provide a classic doo-wop rendition of a modern pop hit. One Direction uses a lot of tight harmonies, so it makes perfect sense to adapt their songs to a cappella—yet we didn’t know just how well it would work. What fun.

Element, Burn: I really enjoyed this all female group from New York. I love that they’re musical theatre singers as well as pop and r&b singers, and I appreciate the challenges they have to face as an all-female group. I love the subdued, nuanced nature of their arrangement and their sound. They prove it doesn’t always have to be loud and scattershot, as some of the other groups are. Plus, they looked classy.

The Filharmonic, Treasure: I liked these Filipino-American singers from L.A. While I also liked the University of Kentucky’s AcoUstiKats, I enjoy the more focused sound that a smaller group brings (the Filharmonic’s six voices, as opposed to the twelve in AcoUstiKats, for example), and they have a good attitude and fun presentation.

The show ended with the two groups that the judges deemed in trouble participating in an Ultimate Sing-Off challenge to decide who would be going home. The 13-men Princeton Footnotes went up against the five men and one woman of Voiceplay, having both prepared the same song: *NSYNC’s “Bye Bye Bye.”

While it’s interesting to see the very different approaches and sounds the two groups have, I ultimately found it a little strange. Both groups threw some random actions in there, and while I like the tighter sound of the smaller group, I don’t really like their lead singer. But the judges do, and give Voiceplay a chance to improve while sending the Footnotes home. I think it’s difficult for college a cappella groups like the Footnotes—steeped in a classic tradition but not the retro-hip tradition that doo-wop represents—to succeed in competitions like this.

I have to confess, while I didn’t watch “The Sing-Off” when super group Pentatonix competed, I’ve since come to know and love them. As brilliant as they are, they’ve ruined a cappella for me a little, because it’s difficult for another group to be anywhere near as amazing.

So “The Sing-Off” is off to a good start. But what do you think, fans? Did the judges make the right decision in sending the Footnotes home? Who were your favorite groups of the night? Are you excited for Wednesday’s party anthems?