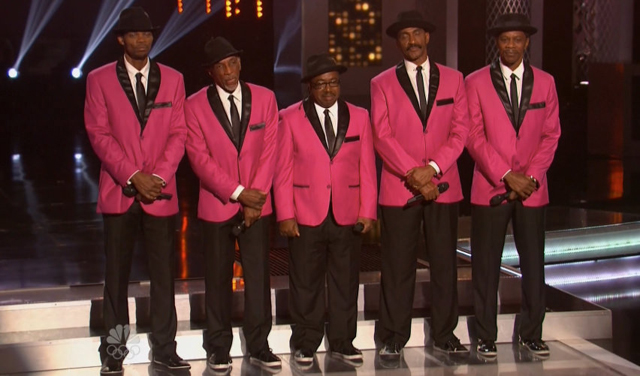 Welcome to another recap of “The Sing-Off,” this time with a shortened show. Four of the eight groups performed their favorite chart hits, but two of them battled off, and one was eliminated.

1. The Company: I love the group number they all did of Peter Gabriel’s “In Your Eyes.” Yes, there’s no denying it’s a great song, no matter how much airplay it may get, and this version is beautiful. Lovely arrangement, great soloists, and terrific, tight harmonies with almost a gospel feel. Beautiful.

2. AcoUstiKats, Amazed: I want to know what Ben is thinking, all the time, because he has the most intense look on his face when he watches the performances. This group has not been a favorite of mine, because I found them a bit chaotic in the past, but this is very nice. Really pretty. While it’s sweet that the bass proposed to his girlfriend, I also feel a little uncomfortable for her. I hope she had at least a hint that it might be happening.

3. The Filharmonic, One More Night: To be honest, I’m not that familiar with this song, but I really enjoyed it. As I mentioned yesterday, I’m really starting to enjoy this “Filipino boy band.” They’re adorable, and while the judges were split, I agree with Shawn that this was the tightest they’ve been.

After Street Corner Renaissance and The Filharmonic went head to head singing “Na Na, Hey Hey, Kiss Him Goodbye,” the judges made the difficult decision of letting Street Corner go. It is difficult without vocal percussion, because it can sound a little flat without it. Still, it’s sad to see them go, but I’m also glad Filharmonic is staying.

What about you, aca-people? Do you agree? Or did the judges get it wrong? Which were your favorite performances on this episode of “The Sing-Off”?