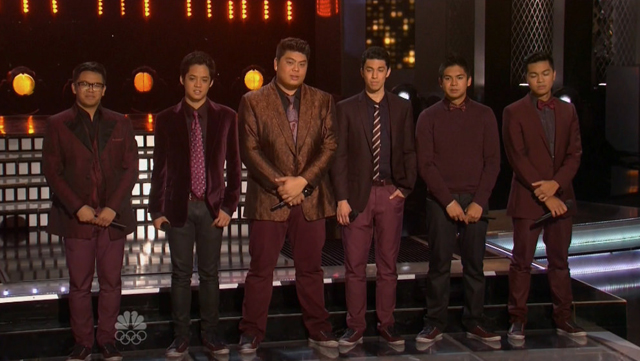 We’re getting closer to the “The Sing-Off” Finale, aca-people! We’ve now made it through the Semi-Finals, and only three groups remain. But first, the Final Four sing their Judges’ Choice songs.

Here are my Top 4 performances in this episode (yes, four, because I really enjoy that opening group number):

The Final Four, Shake It Out: This is really beautiful and everyone does a great job. I especially love the look on Ben’s face—and totally agree—when Home Free’s bassist Tim starts singing. It’s great to hear him as a lead, and not just showing off his (albeit fantastic) bass voice.

Ten, Proud Mary: Wow, lead singer Deedee totally channels her inner Tina Turner! This sure ain’t no Creedence Clearwater version of the song … but that’s no surprise. Something went a little odd with the modulation, and the energy may have waned a tad, but the performance is lots of fun, especially considering how tough it is taking on such an iconic song. I do agree with Jewel, though, that I’d like to see what they can do outside of the gospel world.

Home Free, Colder Weather: Yes, I’ve been pretty clear on my feelings for these guys, but they have yet to fall flat (heh, get it?), and this performance is no exception. It’s great to see them do a ballad too, and they do it beautifully. Rob, the Bearded One who’s always funny in the package, takes center stage with a solo. What a lovely tenor timbre he has. They definitely hit that gooey emotional center they were striving for. Beautiful.

Vocal Rush, My Songs Know What You Did in the Dark: I really enjoy this more than I expect to. They perform a good arrangement with fun choreography and strong solos. Wow, these kids are kind of amazing. They’re quite mature for being so young, and they get better with each performance.

After an Ultimate Challenge between Ten and The Filharmonic, the Filipino boy band is sent home, and the gospel gurus move into the Finals. I can’t say I’m too surprised by the outcome.

So what did you think of “The Sing-Off” performances, aca-fans? Which were your favorites? Are you pumped for the finale on Monday? Do you think Jewel will get a satisfactory climax, or will she be frustrated again?