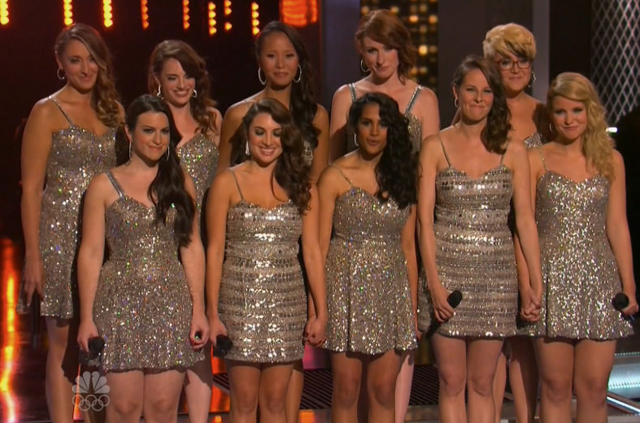 Welcome back, aca-people! “The Sing-Off” returns with the other four groups who didn’t perform last week, singing songs that “span the generations.” Ben Folds works one-on-one with the groups, VoicePlay, Home Free, Vocal Rush, and Element, to tighten up their performances.

Here are my Top 3 performances in this shortened episode:

Home Free, Ring of Fire: I love these guys. They’re hip and fresh, with a great sound and a maturity that the other groups lack. They really gave my favorite a cappella version of this song, by The Bobs, a run for its money. That bassist is fab—even when he’s not singing bass, as he shows here—and that growl at the end (the Brown Note?) is something. None of the others can touch him.

VoicePlay, Don’t Speak: As I’ve mentioned before, I don’t really care for the lead singer. She tries too hard, and she’s got a scratchy voice quality. But they’re improving as a group, and she’s starting to allow the other members to shine, particularly in this great arrangement. It’s wonderful to showcase the other guy, and he did a great job.

Ultimate Sing-Off Challenge: Not surprisingly, Element faces off against Vocal Rush in tonight’s challenge, to “Survivor.” Both groups are very strong, but not quite strong enough, and while I really enjoy Element’s sound—they have a great bass and percussion section, especially for an all-women group—somehow it’s not quite there yet. The dichotomy between these two groups is interesting: Element has class and finesse, but Vocal Rush has hard-hitting power. Intense.

I’d like to think the judges had a difficult decision, but perhaps not, and while I’m a little disappointed, I’m not terribly surprised: Element is out. Vocal Rush, the only high school group to ever get this far in the competition, continues to sing another day.

So what do you think, “The Sing-Off” fans? Were you at all surprised by the results? Are you excited to see the movie songs on Wednesday? Who are your picks for taking the title this year? I know who I expect to win. Hint: their auspicious name says it all.