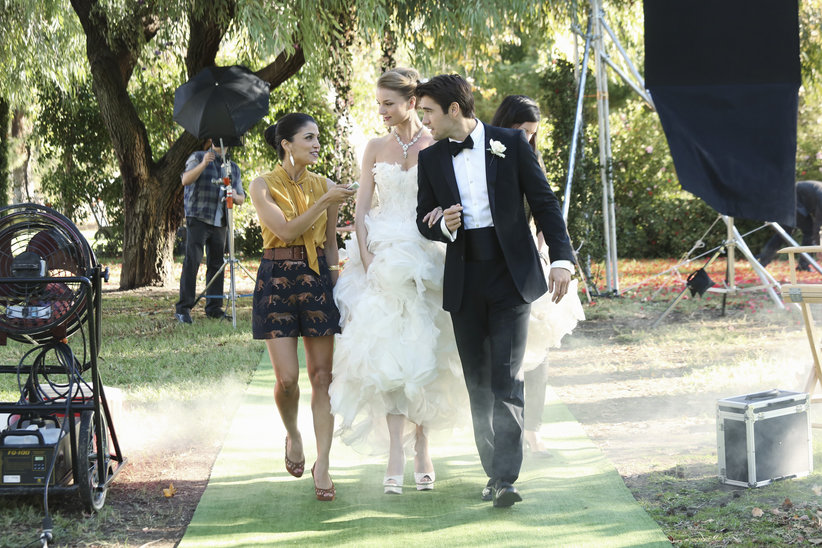 Here we go… the wedding is next week, and Emily is working hard to get everything in place for the big take down.

Opening quote from Emily: “When facing your enemy, no amount of training can trump nature. It separates the strong from the weak, and sometimes it tells us that surrender is the strongest move of all.”

Daniel and Emily take wedding photos and aren’t on the best of terms… Emily can still feel the ice in Daniel’s veins… but later after meeting with Sarah, he recommits to her when Sarah decides to let him go. Sarah returns the necklace he gave her and leaves. Daniel later stands on a dock, lamenting about their relationship, then drops the necklace into the water and lets her go. Sounds like a Kate Winslet move, right?

Emily and Victoria meet to finalize seating assignments for the reception, but of course have a loving verbal exchange.

Victoria: “After learning her fiancee was in the arms of another, most self-respecting women would call things off.”

Emily: “And many wives would leave their husbands, yet, here we are.”

Oh dear, Lydia drops clothes from Victoria’s room onto the back patio. Victoria and Emily both are shocked to see her. Lydia is a bad-ass, and Victoria regrets letting her live. Victoria knows Lydia is back to cause trouble, and Lydia isn’t backing down. I might if I were her… Jack and Margaux are getting more serious. It really showed when Margaux gave up her article on Conrad after Jack told her the truth about him. I’m liking Margaux now… and she can hold her own with Lydia!

Aiden… he wants Emily asap. What did you think of his proposal to her? I used to like him, but now there is something creepy about him. Do you think so too? Emily did seem happy when he proposed… I don’t know what to think.

Lydia surprised Conrad at the condo – where he thought he was meeting with Time magazine (that’s a good one). Lydia’s still in love with him – yuck! His voice alone is enough to send me the other way – although he was happy to hear that Emily is pregnant (Victoria knows she’s lying… well, guessing that she’s lying).

The big news is the photo albums that Conrad had in the room that will show that Emily has been around stalking the Graysons. And Lydia is there to see them! Boing! What the heck is Lydia going to do? Whew!

I thought it was clever that Emily was at the shooting range wearing one of Victoria’s bracelets so she could get gunpowder on it… for evidence against dear Vicki. She is at the end of her big plan… now we just have to wait a week until the wedding! I’m so excited trying to guess what’s going to happen!

Last scene – Victoria shows up at Emily’s beach house. She hands her the rsvp… I DECLINE WITH REGRET is checked! I love it!

How did you like this episode of “Revenge”? Are you as ready as I am for the big wedding? I can only guess what is to happen – and who shoots Emily!