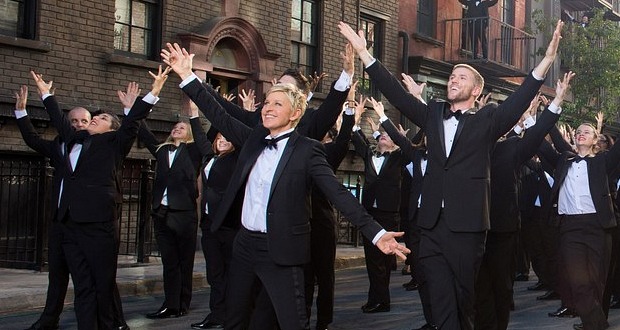 The Academy sent out a trailer this week to get everyone revved up for the Oscars on Sunday March 2, 2014 on ABC.

It features Oscar host Ellen DeGeneres and 250 tuxedo-clad men and women dancing down the street to “The Walker” by indie pop band Fitz and The Tantrums.  It’s a new single from their second full-length release, “More Than Just a Dream,” on Atlantic/Elektra.

Ellen looks great! The number is very snappy and the music is sort of addictive.

BUY: “The Walker” on

The trailer is directed and conceived by Paul Feig, who talks about being a new Academy member in a separate clip. He also says the message he’s trying to convey is “that everyone gets to go to the Oscars.”

Feig’s directing credits include “Bridesmaids,” “The Heat” and the upcoming comedy “Susan Cooper,” starring Melissa McCarthy. In a behind-the-scenes trailer, Ellen says she’s hoping Feig will put her in “Bridesmaids 2.”

The choreography is by freestyle dancer Stephen “tWitch” Boss.

Although Ellen’s song-and-dance routine looks very smooth and effortless, the behind-the-scenes clip shows what goes into creating such a lavish production number. You can see Ellen is breathing a little hard to keep up with the young dancers. I wondered how she could make it look so easy. A lot of it is illusion, like a Hollywood movie.  The clip is a lot of fun and Ellen seems to be having a blast, all of which bodes well for a good Oscar night.

The trailer will run in theaters nationwide beginning January 3, 2014. Check it out below, and see more Oscars videos on their official YouTube channel.