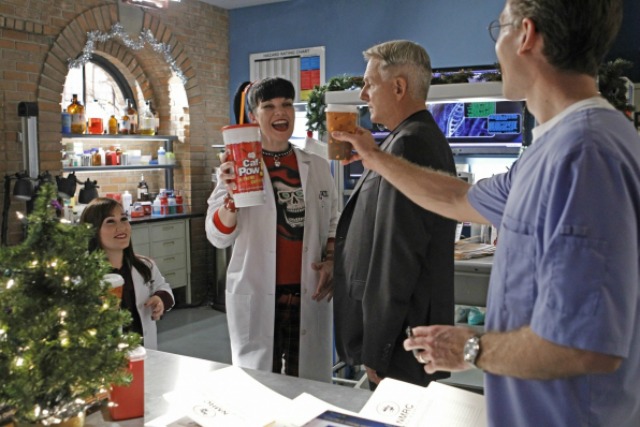 Aahh, the “NCIS” Christmas episode of 2013. The most wonderful time of the year. But, sadly, it’s never a wonderful time for absolutely everyone. Let’s not forget that and think of those less fortunate.

Happily, the bad in this episode turned out not to be so bad after all. Quite a shocker when they started talking about bio terror. Personally, I think bio chemical weapons are the most terrifying kind. You can’t see it coming at you. I think victims are oblivious at all times, which makes it impossible to avoid. Simultaneously, once you get sick, doctors might very well have a hard time figuring out what’s wrong with you, and if/when they do find out, the question remains whether they can treat it.

In this episode, the doctors had great difficulty treating the sick children. Abby and Palmer had to work together with Carol, Abby’s old friend who works at the Naval Medical Research Center. They couldn’t figure out what kind of bacterium they were dealing with, what this illness was.

The fact that they were dealing with an unfamiliar kind of bacterium and that only children in military families were getting ill, with the exception of one elderly owner of an on-base dry cleaning shop, made it seem like a targeted chemical attack. The case seemed even more suspicious when agent Bishop found out about Max Comey, a recently fired lab assistant who was accused of stealing toxic mold spores, and who fought a marine corps recruiter last week, after  he was refused an application.

Luckily, it turned out that the mold spores had nothing to do with the sick children. Marine captain Louis Boggs recently came back from the Congo, bringing with him a (treatable) disease indigenous to that region. He went on to play Santa Claus at military holiday parties (and brought his Santa outfit to the dry cleaners), thus coming into contact with all those sick, making him ‘patient zero.’

I though it was an interesting case. And refreshing that it really turned out to be an accident rather than a crime.

At least as interesting as the case was the fact that this episode of “NCIS” (finally!) focused more on Vance and Palmer. Palmer and Breena are finally going to adopt a baby. It was so adorable how Jimmy started worrying about a child he doesn’t even have yet. I do hope the writers will follow up on that storyline.

Vance was confronted with his father-in-law, whom he’d never met before, almost a year after his wife’s death. I’m glad the man seems to have changed for the better and that Vance is giving him a chance. I also hope we will see more of the Vance family in the future. When a show runs for so long, you really do start to care more and more about all the characters, don’t you? And even their families and friends that you only see every now and then.

I’m curious to know your thoughts on this week’s “NCIS”! Leave thoughts in the comments below.

And what about Tony? Is he really going on vacation to Jamaica? Or might he secretly be going more towards the East? Let’s say … Israel?

I wish you all Happy Holidays and a wonderful New Year.