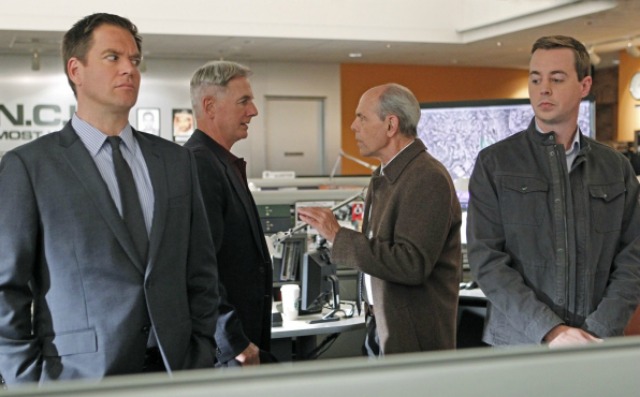 So, here we are again, after a two-week break. Episode ten.

Fans of the show knew, as soon as they saw the title of this week’s “NCIS” episode, that it would bring back FBI agent Fornell and his and Gibbs’s ex wife Diane Sterling. Two years ago, “NCIS” started what already feels like a tradition; a comic episode centering around Gibbs, Fornell, and Diane. In season nine it was “Devil’s Triangle,” last year we had “Devil’s Trifecta,” and now “Devil’s Triad.”

The past two years, these episodes were the funniest of the season, in my opinion. Needless to say, I was very excited for last night’s episode. If I’m going to be extremely honest, I might have expected to laugh a little bit more than I did, but it did not disappoint.

This is still “NCIS” though, so there was also a case. The episode opened with Marine Corporal Ron Flegman being shot by a clown. Yes, a clown. I had to cover my eyes because clowns are scary.

At the scene, our special agents found two cellphones with Flegman’s belongings. One had about a dozen missed calls, all made from a room at the Adam’s House Hotel. At said hotel, Gibbs and Tony, later joined by McGee, find Diane. And Fornell. I was shocked! I absolutely did not see that coming. Did you?

The scene that followed was, of course, hilarious. Each time, the scenes with Melinda McGraw and Joe Spano, who play Diane and agent Fornell, were just brilliant. And congratulations to Michael Weatherly for the wonderful facial expressions as well.

As it turns out, Diane split up with her latest husband and now has a boyfriend, Eddie, whom she tried to call the night before to break up with him, since she was getting back together with Fornell. So the second cellphone found at the scene was Eddie’s. That, and the fact that they couldn’t find any information about Eddie prior to six months ago, automatically made him a suspect.

What they did find out was that Eddie works at a local climbing gym. I kind of knew it was Eddie´s boss, Elijah Banner, from the moment they spoke to him at the gym. He jumped right in, saying that Eddie had a problem with Ron Flegman, who was Eddie’s student at the gym. That’s kind of a giveaway, don’t you think?

What I did not see coming was the fact that Eddie turned out to be a Secret Service agent. I’m sure there’s some people out there who did, though, seeing as there was no information about him until six months ago. Who guessed it? Please tell me if you did!

As for new “NCIS” team member Ellie Bishop, nothing really special in this episode. But then again, it wasn’t really about her. And I think it was wise of the writers to not put her ‘in front’ right away. A lot of viewers probably need some time to get used to her.

I reckon it must be pretty difficult for Emily Wickersham, who plays Bishop. Not the easiest position to be in. So I would like to take this opportunity to wish her the best of luck. After all, she’s got nothing to do with whatever went down last summer.

Lastly, what did you all think of Emily Fornell? I couldn’t believe she was 13 already!

Leave thoughts on this episode of “NCIS” in the comments below!