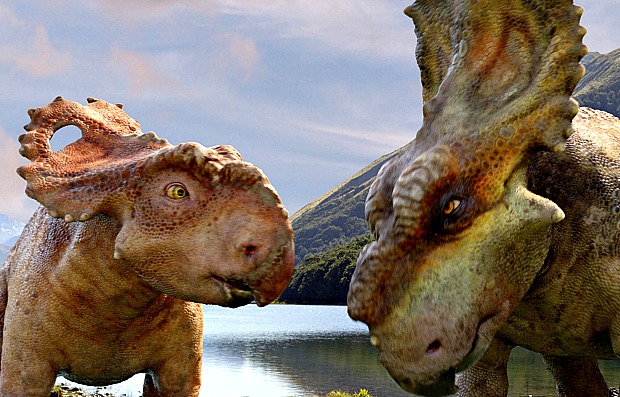 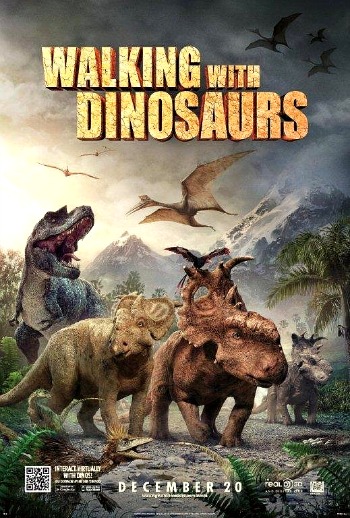 REVIEW: “Walking With Dinosaurs” can’t decide if it’s a DisneyNature documentary or a cute family movie. It falls somewhere in the middle, but never quite achieves either one.

First of all, it’s a “live-action” movie, in that it uses computer-generated images of dinosaurs and other Neanderthal creatures. But when they talk, their mouths don’t move. So I guess we’re reading their minds when they talk to each other telepathically.

The beginning features a teenage boy and his kid sister in Alaska with their paleontologist father (Karl Urban). When the boy finds a dinosaur tooth in their SUV, a bird (voiced by John Leguizamo) starts talking and announces that “every fossil has a story.” He transforms into a prehistoric Alexornis bird named Alex, who speaks with a Spanish accent, and tells the fossil’s tale from the Late Cretaceous period.

The story follows a Pachyrhinosaurus dinosaur named Patchi (Justin Long), who’s the runt of his herd and nearly killed when a predator leaves a hole in his frill. Patchi is saved by his mother, grows into a young adult, and meets a female dinosaur named Juniper (Tiya Sircar) from a different herd. When climate changes spark a Great Migration, Patchi transforms into a responsible dinosaur and eventually the leader of the herd, but not without a fight from his brother, who also wants to be herd leader.

If you’re looking for a big-budget dinosaur documentary, you won’t find it here. Unlike the original BBC “Walking With Dinosaurs,” which featured the voice of Kenneth Branagh, this film falls somewhere between “Ice Age” and “The Land Before Time,” only with computer-generated images instead of animation. And of course, lots of jokes about dinosaur poop.

That’s not to say it doesn’t have some redeeming qualities, like the stunning digitally created 75-million-year-old landscapes, creatures and Northern Lights skies. The soundtrack is also interesting, including Fleetwood Mac’s “Tusk,” Matisyahu’s “Live Like a Warrior,” Lord Huron’s “Ends of the Earth,” and Barry White’s “I’m Gonna Love You a Little Bit More, Baby,” which plays when a young male dinosaur instantly falls for a young female dinosaur (which will probably go over the heads of young viewers).

It’s all kind of a mish-mash of things, but still fun for kids who love dinosaurs. Check out the film’s official site for more info about the dinosaurs of that period.

Sex/Nudity: A young male dinosaur instantly falls in love with a female dinosaur, as a Barry White song plays in the background. He hopes they’ll mate, but his brother, the herd leader, claims he has the “right” to be with her.

Violence/Gore: Several scenes might scare younger viewers. Dinosaurs are killed (off camera) by other dinosaurs, and a fire sweeps across their habitat. A misguided leader leads the herd onto a frozen lake, where the ice cracks, causing a few dinosaurs to fall through and drown. A young dinosaur is nearly killed and permanently disfigured by a carnivore. Male dinosaurs fight for dominance. Carnivore dinosaurs attack the herbivore dinosaurs several times.

Will Parents Like It? This fictionalized account of a prehistoric dinosaur’s life includes a few scary scenes and a romantic subplot kids probably won’t get. The computer-generated images are impressive, but the animals’ mouths don’t move when they speak, which is a little odd. An educational bonus is that bits of info about the dinosaurs are flashed on-screen at various points. The PG rating is on target.