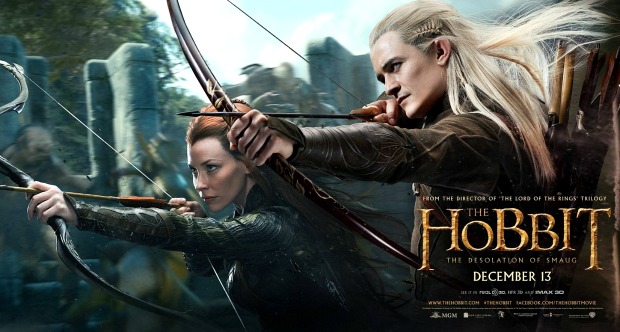 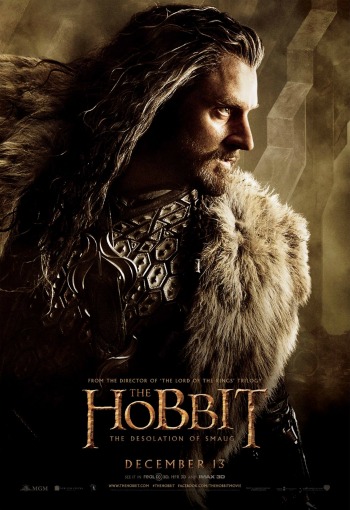 REVIEW: I loved “The Hobbit: The Desolation of Smaug,” and even loved the 3D version (it was actually FILMED in 3D and not converted later – that makes all the difference). At 161 minutes, it’s long, and yet, I didn’t want it to end. The pacing is good and the action moves along at a brisk speed. I also loved the new setting of the once great Laketown.

The story continues the quest of noble dwarf Thorin Oakenshield (Richard Armitage), wizard Gandalf the Grey (Ian McKellen), hobbit Bilbo Baggins (Martin Freeman), and a motley crew of dwarves as they travel toward the dwarves’ abandoned kingdom of Erebor, where the dragon Smaug now lives.

PHOTO GALLERY: “The Hobbit: The Desolation of Smaug”

The journey is fraught with peril, as the group encounters scary orcs, the dark necromancer, militant elves, and a lake town full of desperate humans. Gandalf leaves them to determine whether Sauron has returned, and Bilbo confronts the massive dragon Smaug (psychopathically voiced by Benedict Cumberbatch), who sleeps underneath a mountain of gold. Smaug seems a formidable foe for the dwarves, who are determined to take back their treasure-filled kingdom.

The first “Hobbit” movie laid a good foundation, and this second installment builds on the story in every way. However, some Tolkien purists probably won’t like the fact that it strays from the book in various ways, including the addition of Evangeline Lilly’s character Tauriel, who attracts the attention of Legolas and Kili.

Luke Evans is perfectly cast as Laketown’s handsome and heroic Bard the Bowman, as is Lee Pace, the beautiful, cold elvenking Thranduil, who clashes with his brash son Legolas (Orlando Bloom). And my son will disown me if I don’t mention his favorite character, the Master of Laketown, played by Stephen Fry.

Director Peter Jackson and longtime cinematographer Andrew Lesnie are masters of the fight scenes, and they outdo themselves with an amazingly choreographed scene where Legolas and Tauriel fight off orcs as the dwarves float down the Forest River in barrels. Well, sometimes they float, but most of the time they’re in a swirling chaos of white water. Just brilliant.

I’m sure the DVD/blu-ray release will have plenty of bonus features, but don’t miss “The Hobbit: The Desolation of Smaug” on the big screen – and in 3D. It’s an absolute requirement to fully immerse yourself in the experience.

Sex/Nudity: Both Legolas and Kili are smitten with the beautiful elf Tauriel. Kili invites her to check down his trousers for weapons, because she might find something, to which she responds, “or nothing.” Kili and Tauriel hold hands.

Violence/Gore: So far, the “Hobbit” trilogy (the third film will premiere in 2014) isn’t as violent as the “Lord of the Rings” trilogy, although there are several edge-of-your-seat moments in this movie, courtesy of the orcs, the dragon Smaug, the spiders, and evil Sauron. Deadly confrontations occur between the dwarves and the orcs, the elves and the orcs, and the dragon and the dwarves. Orcs are killed (one is decapitated); one dwarf is shot with a poisoned arrow and nearly dies; Smaug breathes fire on Bilbo and the dwarves, and ends up buried in a sea of molten gold. Beorn is a skinchanger who changes from a giant man into a terrifying bear-like beast. Giant spiders will most assuredly creep out sensitive viewers.

Profanity: Insults include “coward,” “rabble rousers,” “shirkers,” “usurper,” “thief,” “burglar,” an insult in Dwarf language, and a couple of humorous insults about Gloin’s wife and son looking like a man and beast, respectively.

Drugs/Alcohol: The dwarves are famous for their drinking, and do so on several occasions. One scene at a pub involves drinking. The elves steal wine from a cellar and appear passed out from drinking.

Will Parents Like It? This movie builds on the first “Hobbit” in every way. Great action, characters, new settings and more. The PG-13 rating is on target.