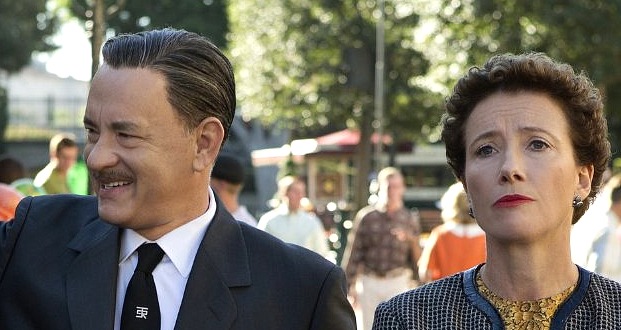 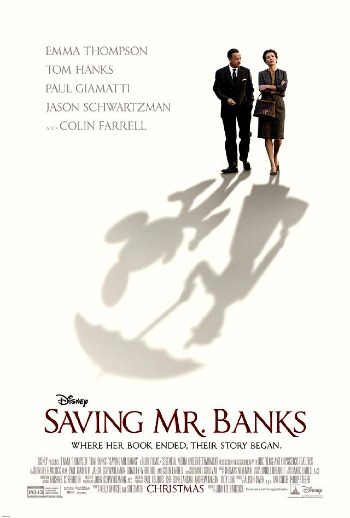 REVIEW: I had no idea about the fascinating story behind “Mary Poppins.” Turns out that Walt Disney was on a 20-year quest to get author P.L. Travers to sign over the rights so he could make the film. He was persistent, though, asking her year after year to agree to the film, and all because he’d made a promise to his daughter that he would turn the book into a movie. Talk about never giving up.

Travers (Emma Thompson) was notoriously picky and didn’t want her beloved book besmirched by the cheerful Walt Disney (Tom Hanks) with all his glittery animated creatures. But it would have been a quite different movie if she’d had her way. She didn’t want any dancing penguins or cartoon characters. She didn’t want Dick Van Dyke in the film. In fact, she didn’t want it to be a musical at all. Can you imagine “Mary Poppins” as a somber tale with no singing?

The real story of “Mary Poppins” lies in Travers’ own family history. When she was a child, her father (Colin Farrell) moved the family to Australia, where he took a job as a bank manager and slowly succumbed to alcoholism, nearly driving her mother insane in the process.

The movie bounces back and forth between Travers’ childhood at the beginning of the 1900s and the 1960s, as Walt Disney slowly wins her over and convinces her that her beloved book will be safe in his hands. And we all know how the dancing penguin issue turned out.

I loved “Saving Mr. Banks,” partly because it sheds new light on a cherished childhood movie, but also because Thompson and Hanks are irresistible in their roles, with their verbal sparring and stubbornness. Paul Giamatti plays Travers’ driver while she’s in Los Angeles, forging a friendship with her as she sniffs at the unpleasant odors of “chlorine and sweat.” I’m also a big fan of movies that take place in the 1960s; the clothing, cars and decor remind me of my own childhood.

B.J. Novak and Jason Schwartzman play the amazingly talented Sherman Brothers (Robert and Richard, respectively), who wrote more motion picture musical scores than any other songwriting team in film history. Along with “Mary Poppins,” they scribed “Chitty Chitty Bang Bang,” “The Jungle Book,” and “The Aristocats,” to name a few.

These two really, really need their own film, with Novak and Schwartzman in the roles. They somehow managed to appease Travers into letting them include songs like “Supercalifragilisticexpialidocious” into the film. Again, can you imagine “Mary Poppins” without that iconic song?

“Saving Mr. Banks” is lovely, but a bit uneven because the two stories — Travers’ childhood and her later interactions with Walt Disney — are so divergent. Her childhood story is dark and fraught with despair, whereas the Walt Disney story is more, well, Disney-ish.

Also, I’ve read that although Disney finally won her over (or maybe wore her down – I’m sure her financial difficulties had something to do with it), she was famously displeased with the movie version of her book. So, in a sense, this movie does just what she never wanted — fabricates a happy ending where none exists (well, not for her anyway; it was certainly a happy ending for the millions of filmgoers who love “Mary Poppins”).

Still, “Saving Mr. Banks” is an entertaining look at the iconic “Mary Poppins,” and definitely worth seeing on the big screen. And I’m sure there will be plenty of behind-the-scenes info when the DVD and blu-ray are released. In the meantime, I’ll keep championing a Sherman Brothers film with Novak and Schwartzman in the lead roles.

Violence/Gore: Travers’ father is a self-destructive alcoholic. He fights with his boss while his daughter looks on, and is later shown in bed coughing up blood. A woman nearly commits suicide by walking into a river in front of her daughter.

Drugs/Alcohol: An alcoholic man spirals into despair and literally drinks himself to death, leaving behind a wife and kids. Walt Disney smokes cigarettes, but hides it from the public.

Which Kids Will Like It? Kids 13 and older who like biographical movies or want to learn the story behind “Mary Poppins.”

Will Parents Like It? I really loved this movie, although it probably appeals more to adults who grew up with “Mary Poppins” than current-day teenagers.