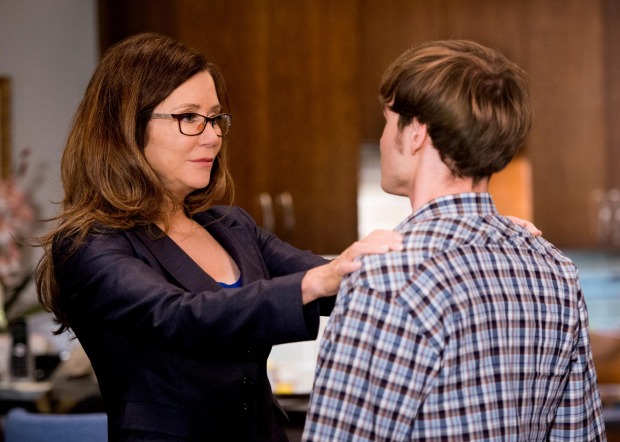 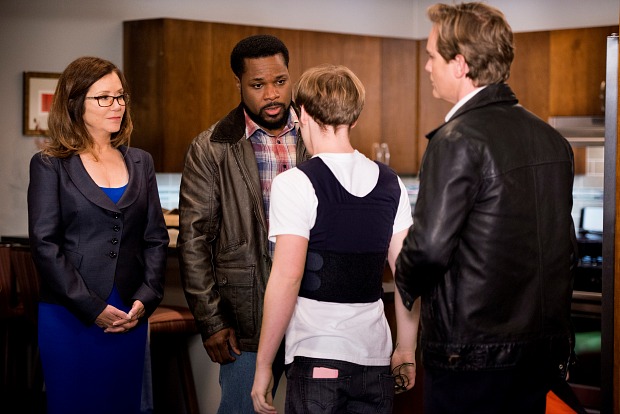 I’m several episodes behind on “Major Crimes” – well, really since the show came back this fall. So I’ll just do my usual thing and boldly jump into this episode.

This episode centers on a car dealership and the owner – named “Little Ted” – sets up a good motive for his murder by firing people willy-nilly on his way out of the shop. Sure enough, he hops into a Mercedes SUV on the lot, turns the key, and wham! The car explodes into a blaze of flames. Good intro! Brings new meaning to the term “year-end blowout.”

The bomb squad shows up, along with the Major Crimes guys – Provenza in his little white hat, of course. Prior to being traded into the dealership, the car was registered to an Iranian businessman. We learn that little tidbit has basically nothing to do with the murder, however.

Meanwhile, Rusty and Sharon are in a car driving down the street. She’s helping him prep for an undercover operation to draw out the person sending him threatening notes. And she’s going a little insane in the process and is only too happy to turn the driving instruction over to Sykes.

The bomb squad determine that the bomb had a trigger, and after checking through emails, turns out “Little Ted” was gay. He gave his wife a Lexus off the lot, and had planned on giving his lover, Darren, the Mercedes. Little Ted told his wife he was leaving her for Darren.

Sounds like a good motive, huh? So it can’t possibly be the wife, because that’s too obvious. Hmmm… maybe it’s actually Darren who’s the murderer, even though during the interview, he’s weeping enough for Provenza to give him his handkerchief.

Also, two nine-volt batteries and Christmas lights were bought on Ted’s credit card — AFTER Christmas — which means there’s a second bomb, which they find under another car – owned by the dealership’s comptroller, Ray Winters. It’s both creepy and funny when Tao and Provenza try to detonate the bomb.

Olivia – Little Ted’s wife – was 15 miles away when the bomb went off, so she didn’t do it. While interviewing Ted, Sr. and Ray Winters, Sharon asks about an account known as “Ted King Auto,” worth $1.9 million+. Car buyers were told to make the check out to Ted King Auto every time a lifetime supply of car washes was purchased with a vehicle. Turns out Ray was embezzling from the company and was about to be found out. And Ray put the bomb on his own car to take suspicion away from himself.

Ray wants a lawyer! Sharon says she’ll get him a deal with a lifetime guarantee!

Malcolm Jamal-Warner – where has he been all these years? – is playing Lt. Chuck Cooper, a hard-ass cop working with Rusty on the undercover case. A far cry from Theo Huxtable on “The Cosby Show.” But I like it.

Rusty sets out on the undercover operation and is playing chess in the park. A guy sits down and puts a pad of paper on the table that says “Turn your wire off … or your mom dies … right now…” Then the guy tells him to pack up, go to his car and wait for him to drive ahead of him – all of which Rusty does.

Except when Rusty gets into the car, Sykes is in the back seat and pulls a gun on him. The threatening guy was one of them! Rusty failed the test! Is it just me or does that seem a little harsh? Was this sanctioned by Sharon?

Leave your thoughts on this week’s episode of “Major Crimes” in the comments below.