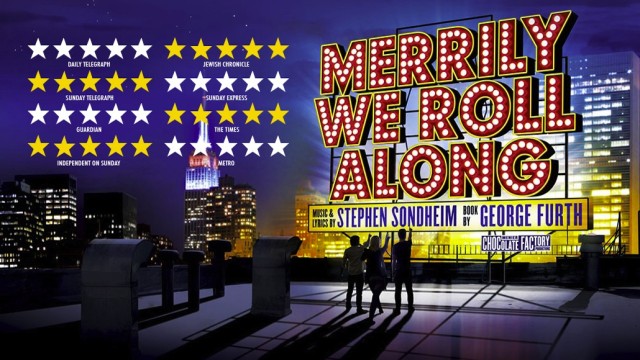 Stephen Sondheim and George Furth’s musical, “Merrily We Roll Along,” had a successful revival at Menier Chocolate Factory theater in London last year and has now become a movie. If you aren’t familiar with the show itself, you might recognize some of the songs like “Our Time” and “Not a Day Goes By.”

Digital Theatre, a company that has begun to film stage musicals for theatrical release in movie houses, brought the production to life for those of us who could not see it on the West End of London.

It’s a wonderful version of this musical that has been known as “problematic,” and it stars some of Britain’s best, including Mark Umbers, Damian Humbley, and Jenna Russell, in a story about the unraveling of friendships.

Why is “Merrily” problematic? Because it operates in reverse time. The first scene is what would normally be the last scene, and it works backward in time from there. As you can imagine, this is particularly complex in a live theater.

I recently spoke with the director of the show, Maria Friedman, who is a big star of the London musical theater, having won three Olivier Awards (England’s equivalent of the Tony Awards). Still, she is known for her work on stage, not behind the scenes, and “Merrily We Roll Along” was her first foray into directing.

Maria was hardly a counter-intuitive choice as director, however. She is known as a top interpreter of Sondheim, having played such roles as Dot in “Sunday in the Park With George” and Fosca in “Passion.” And the success of the stage production speaks for itself. It received more 5-star reviews than any other musical in West End history and won the 2012 Critics’ Circle Award for Best Musical.

Check out Maria as a performer in the video below, and read highlights from my phone interview with her after.

When I first heard that your directorial debut was “Merrily We Roll Along,” I thought, “Is she a masochist?”

[Laughter] I was lucky inasmuch as I didn’t really have an inkling that it was considered sort of a difficult piece. I just knew I loved it, and that’s where you need to start from, feeling that you understand it and care about it. And I did.

Did you find it as difficult as people say?

I really didn’t. I found it quite confusing – the timeline – when people would say, “Where am I at this particular point?” We had to have those timelines written all over the studio for my sake, let alone the actors.

But actually, just in terms of the narrative and the storytelling of it, it seemed to me very clear. I thought that George Furth had done a remarkably clear book, actually, full of lots of wit and humor, which is the thing I love to mine because the rest can take care of itself.

I’m not saying that directing on any level isn’t challenging. Of course, it is. You’ve got all these different elements to keep up in the air at the same time, but I really enjoyed that.

That wasn’t a struggle; that was a revelation as to how much I actually enjoyed that side of it.

So, you didn’t feel a twinge that you weren’t on stage?

Oh, of course, I did! Yes, absolutely – many, many times. But funnily enough, when you’re in a room with such amazing performers and actors – I can’t explain it, but you start investing in them as if they are something very precious to you. And you only want the best for them.

Everyone was working so hard and giving so much trust to me, which they didn’t have to do as a first-time director. I’ve been in companies where people are very, very difficult if they don’t feel held and supported….

My overwhelming urge was to make sure that the story worked, and I sort of disappeared from the rehearsal room in my own body. It was wonderful – very freeing.

I’m definitely going to do quite a lot of it again. I’ve got a few things coming that I’m not allowed to talk about yet.

I know that you had been in a production of “Merrily We Roll Along,” so how did you approach this version of it? Did you borrow anything? Did you want to start completely fresh?

It’s a very interesting thing. If you speak to any actor who’s been in a show, they know it less well than you do because they’re only seeing it from their perspective.

You [actors] never see it from the outside. You never see the set. You never see the lighting. You never see other people’s performances because you’re either changing or you’re in a dressing room. And when you’re playing a role, you play it as if you are the center of that piece because that’s what your job is – to make sure you flesh out whatever you have to do in its entirety. So, I discovered “Merrily” completely fresh.

How did “Merrily We Roll Along” become a film?

Digital Theatre came along and saw it just as audience members, and they fell in love with it. And they approached [us], and I was actually very loathe to begin with until I met Robert Delamere himself and Tom Shaw – they run the company – and the minute I sat down and talked to them, I knew that they were really a creative group.

What they did was film it on three nights with nine cameras each night. So, we had 27 different edits that we could choose from on every shot. Then, I spent every day in the dark editing it, which I was talked through the process, and off I went.

And it was just the best, best time ever because it’s very, very creative, and you can tell a story in a totally different way…. So, it happened just by them asking and me daring to do it.

And now you have the film editing skill set.

Suddenly, I can do film editing, and I’ve directed! This whole new chapter has begun, and I’m very, very keen to do more filmmaking. I just got the thrill of being able to choose all the beats. Just a fantastic luxury! …

I’m a theater animal through and through, but I love storytelling whether I’m a singer, actress, director, whatever. So, it’s just another wonderful thing to allow you to tell a fantastic story.

Pinpoint – it’s difficult, isn’t it? Because it’s one of those things. Could you pinpoint what’s great about Shakespeare?

I think it’s the universality of the subject matter, the fact that he has this witty, wry take on the fallibility of just being alive. The smallest detail becomes a sort of, as I say, universal message….

He appeals to every part of me as a performer, but when I’m watching, I’m satisfied on another level as well. He’s just got his finger on humanity and its foibles and difficulties. His complete caring of people who don’t quite make it, aren’t finding it that easy in life – there’s a sort of forgiveness and no judgment.

So, that wasn’t exactly putting my finger on it. No, it’s really hard. I should actually have this one up my sleeve by now, but I can’t. What do you think?

There’s a psychological nature to what he does that I think is missing from a lot of other musical theater. He’s changed musical theater in that direction, I think. With “Company,” apparently people walked out because they thought, “I don’t want to look at myself when I go to a musical.”

Yeah, you do see yourself…. It’s so exacting on every level.

I have more impossible questions for you.

Do you have a favorite Sondheim show?

I think probably “Sunday in the Park With George.” I think.

I will agree with you on that one. That one’s my favorite, too.

It’s kept teaching me little life lessons as well. The eight months that I was in it, whatever you’re going through, there’s something in that score, something in those lyrics that would get you through. Amazing piece.

I saw the original production of “Sweeney Todd” on the West End in 1980. That was the first professional Sondheim production I ever saw produced.

Me, too! That was life-changing. Could you believe I felt like I’d completely gone off on a rocket? I was just completely and utterly pushed to the back of my seat.

Then, ten years later, you were in “Sunday in the Park With George.”

When I was watching “Sweeney,” I was in a touring company of “Oklahoma….” I loved what I did, but I hadn’t really got the bug like so many of my colleagues had. It was something fun to do.

Then, I saw that [“Sweeney Todd”], and there was a wonderful girl called Mandy Moore, and she had that wonderful top D [note]. I remember just thinking, “I want to be her one day.”

Little then did I realize that one day, I would actually sit with Stephen Sondheim at the Lincoln Center watching a production of it with him as his guest about, I don’t know, 20 years later. I thought, “Isn’t that amazing that you can have a little dream like that, and it takes its time, but it comes true.”

The next impossible question: Do you have a favorite song to sing of Sondheim’s? I can’t even answer this, so I apologize!

No, no, no, not at all! It really changes according to your frame of mind, but one that I can never get fed up with is “Move On.” And “Finishing the Hat.”

In terms of performing, I’ve been doing this concert tour that’s been over Europe, and I’m coming over to do some stuff with the lovely Terre Hamlisch, who is Marvin Hamlisch’s widow, because I did a lot of work with Marvin….

Terre is one of my very, very, very best friends, so she and Kevin Cole have put together a birthday concert in Pittsburgh. I think that’s in June, and I think there are quite a few others that they’ve got planned on the back of it. I’m not quite sure where we’re going yet. There are four of us singing – Brian d’Arcy James and another woman and Kevin Cole with the Pittsburgh Philharmonic, who are fantastic!

“Merrily We Roll Along” will be playing in various movie theaters across the U.S. from December 23, 2013 to February 23, 2014. Watch the trailer below, and check your local listings for opportunities to see it.