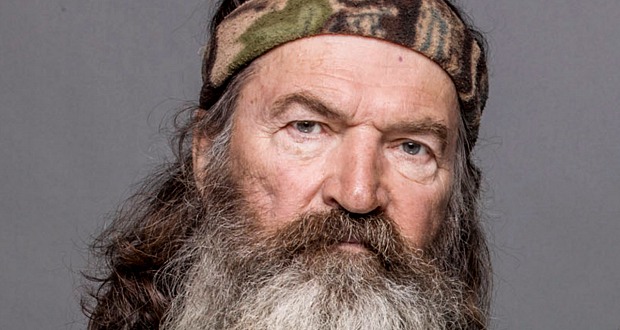 It’s been a tough 24 hours for “Duck Dynasty’s Phil Robertson. The star of A&E’s reality TV show was lambasted online, and then promptly suspended from the show after his comments about homosexuality came to light in an interview with GQ.

He said this in the interview:

It seems like, to me, a vagina—as a man—would be more desirable than a man’s anus. That’s just me. I’m just thinking: There’s more there! She’s got more to offer. I mean, come on, dudes! You know what I’m saying? But hey, sin: It’s not logical, my man. It’s just not logical.

Don’t be deceived. Neither the adulterers, the idolaters, the male prostitutes, the homosexual offenders, the greedy, the drunkards, the slanderers, the swindlers—they won’t inherit the kingdom of God. Don’t deceive yourself. It’s not right.

All of this got the bearded reality star booted off the show, and since then, it’s been a firestorm of controversy. He became an instant conservative martyr, Sarah Palin defended both him and the First Amendment, Louisiana Governor Bobby Jindal defended him (and disses Miley Cyrus in the process), he was named one of 2013’s Rule Breakers by The Hollywood Reporter, people defended A&E’s decision, a petition was launched to reinstate him on the show, and so much more.

Here’s what I think. Even though I believe everyone has a right to love and marry anyone they choose, Phil Robertson has a right to voice his opinions. Look, he’s a a self-confessed Bible-thumper. Is anyone surprised that he would make Bible-thumper statements in an interview?

Is A&E correct in suspending him? Look, the Robertson family doesn’t profess to be anything other than what they are – a conservative, religious family. It’s why the show is so popular. It’s why A&E is making tons of money from them. Who knows, maybe they suspended him to create more of a media storm around the interview and bring more attention to the show. Maybe their plan is to reinstate him, which will make the show even more popular and bring yet more money in to the network. 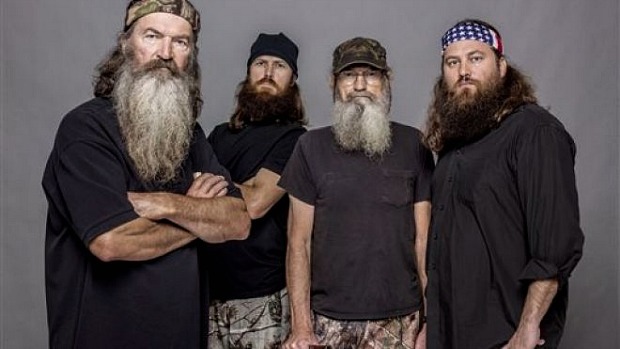 For Robertson’s part, he issued this statement before being indefinitely suspended from the show.

“I myself am a product of the ’60s. I centered my life around sex, drugs and rock and roll until I hit rock bottom and accepted Jesus as my Savior. My mission today is to go forth and tell people about why I follow Christ and also what the Bible teaches, and part of that teaching is that women and men are meant to be together.

However, I would never treat anyone with disrespect just because they are different from me. We are all created by the Almighty and like Him, I love all of humanity. We would all be better off if we loved God and loved each other.”

“We are extremely disappointed to have read Phil Robertson’s comments in GQ, which are based on his own personal beliefs and are not reflected in the series ‘Duck Dynasty.’ His personal views in no way reflect those of A+E Networks, who have always been strong supporters and champions of the LGBT community.”

Well, they ARE reflected in the series, because the series is about Phil Robertson and his family.

When Duane “Dog” Chapman of “Dog the Bounty Hunter” made a racial slur in 2007, A&E pulled the program from the airwaves,  allowing it to return a few months later after the hubbub died down.

When Paula Deen admitted she’d used racial slurs in the past, the Food Network severed ties with her. The ordeal took much longer than the Duck Dynasty suspension, taking several days to unfold, ending with a series of cancelled interviews and awkward taped apologies. Are Phil Robertson’s comments different than hers?

“Duck Dynasty” is A&E’s strongest property, breaking ratings record after ratings record in its fourth season on the cable network. The program recently aired a Christmas special that drew more than 9 million viewers, with plans to return for the rest of its fourth run in January.

So why move with such speed to suspend Robertson? Especially when the show is such a big money-maker? Well, let’s follow the money. “Duck Dynasty” draws in some of the most lucrative demographics on TV — adults 18-34 and 18-49 — people who are increasingly liberal-minded when it comes to matters of sexuality. Gay relationships on TV no longer elicit such shock as they did a generation ago, and surveys indicate that a majority of Americans support same-sex marriage. As they said in their statement, the A&E network is a big supporter of the LGBT community. They don’t want to tick them off.

Still, some say the A&E decision represents a new sense of urgency from networks to quiet the controversial firestorm that spreads across Twitter, Facebook, blogs and other social networks. With Robertson’s remarks comparing homosexuality to bestiality, A&E probably thinks they had to act swiftly, especially given their progressive corporate values.

And it’s an ensemble show. Maybe they’re thinking the rest of the cast can carry the show (unless they balk), unlike the “Dog the Bounty Hunter” controversy, where he’s the main person in the show.

Unlike with scripted shows, reality stars are in the business of selling their personal brand, and the Robertsons have taken advantage of the show’s popularity. I even saw a Duck Dynasty Chia pet in a store this week. You can’t walk through a Walmart without running into Duck Dynasty clothes, gear and other stuff.

According to some sources, most of the new season of “Duck Dynasty” has already been shot, with Phil getting his usual on-screen time. By the time the actual Robertson time-out episodes air, the whole debacle most likely will have died down. In the meantime, I’m sure lots of people will be tuning in to the season five premiere, which most assuredly will out-pace the season four debut which, with 11.8 million viewers, now stands as the No. 1-rated reality show in cable history.

What’s your take? Was A&E right to suspend Phil Robertson for his comments? Should he have said them in the first place? Leave comments below.