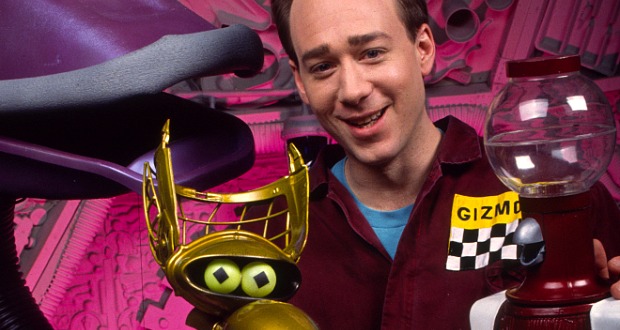 You know him best from Mystery Science Theater 3000 (or as it’s better known, MST3K).

We got Joel to answer our three questions. You may just be surprised at the answers!

“A lot of my childhood was spent kind of trying to figure out how to make stuff, and that was a really common thing. Back when I was a kid — I’m 53 — it was a little bit more like the ‘Little Rascals’ back then. Every dad had a workshop in his basement.

They would let you have access to tools and mess around, and so I was kind of amazed at how big of a part that was out of my life. I think it was just that my parents were do-it-yourselfers.

In second grade, in our reading group, we read about this kid inventor and for our project — and this seemed like an outrageous request from the teacher — but she said, ‘Go home and make an invention.’

So I already had an idea that I was already thinking about called the Cracker Tractor.

Karate was really a big thing when I was a kid, as it is now, but I made this device that looked like a hand on an arm, and it had a rubber band on it and then there was a little holder and you put crackers in there and it would just smash it. So just like, it made a huge mess, and I didn’t really realize it, but it was funny.

I didn’t really get that it was funny until I showed the class. And they laughed because it just made huge mess. It busted a cracker, and everything went flying all over the room. And then — because it’s school and they’re always really strict about the food — I had the presence of mind to grab a cracker and eat it on the way back to my desk, and that also got a laugh.

So it was one of those moments where I started to go, ‘Oh!’ You know, you’re not really conscious of it, but that was kind of the beginning for me of wanting to present stuff and do stuff in front of people. So I like that.”

“[Jerry] Seinfeld figures really big into my comedy. When I stopped doing stand-up, I was back in Minneapolis, and he came into Minneapolis to do stand-up and we hung out. We knew each other from L.A., and we hung out, and I kind of just told him the images that I was getting while I was watching him, what kind of pictures he was putting in my head, and he just said, ‘Hey. You know what? I just got asked to write an HBO special, would you help me write it, the interstitials between the stand-up?’ And so it was great.

We get started and, over the course of about 6 months, he would either come to Minneapolis or I’d go out to L.A., and we just write and had a great time. He had a lot to do with me kind of thinking, ‘Oh, maybe I should be back in comedy.’

So after we were done … I then came up with this idea which was a treatment that I wrote for a feature for him. And it was science fiction feature and he played a space explorer, and he was supposed to go to this planet and explore this planet and it was all populated with kids, with children … It was kind of like Gulliver’s Travels — Where he was loved by this whole society and they made him the ruler. But then all of a sudden it dawned on them, ‘Hey, he’s our parent now,’ and they didn’t like him.

So it ended kind of like the ‘Invasion of the Body Snatchers,’ where they were all chasing him and trying to kill him.

But he said, ‘You know what, this isn’t a show for me. This is like a show for you.’ And that kind of got me thinking, and within months, I kind of came up with Mystery Science Theater.”

“I have to say, I follow a lot of animators on Twitter and artists, and I really love the way they communicate with drawings. I just think that’s such a beautiful and direct way of communicating. And the world is so kind of fed up now to talk in pictures, so I think I’d like that. I just like animators so much, the way they’re conditioned in the world and the way they look at the world. I think I would do that.”