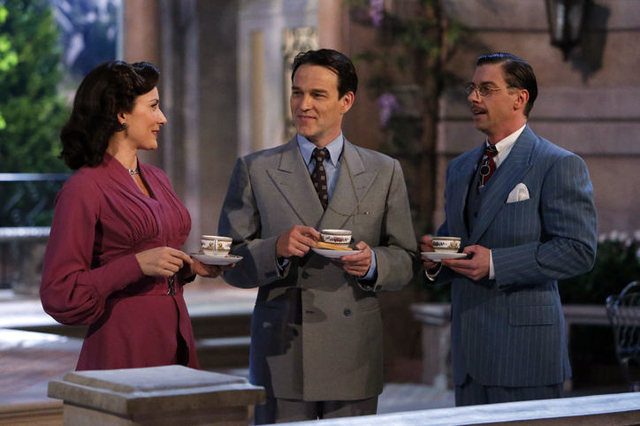 While I personally didn’t hate the production as much as many others did, I felt that Underwood’s acting ability left much to be desired, and the performance was generally a little flat. The only breaths of fresh air were when Broadway veterans Christian Borle, Laura Benanti, and of course Audra McDonald were on screen.

While Borle is known on television for his work in “Smash,” where it’s clear he’s a musical theatre performer, I was surprised to learn that Laura Benanti was a Broadway singer while watching her stint on the 67th Annual Tony Awards. I recognized her from her role in “Go On,” the short-lived NBC comedy also starring Matthew Perry, but I didn’t know she had a theatre background. Her number in the Tonys (performed with Andrew Rannals, Megan Hilty, and host Neil Patrick Harris) exactly sums up the need for this here post: As brilliant and talented as these triple-threat performers are, television helps bring them into the spotlight in a way the theatre can’t.

Tonight, HBO is presenting a special on Stephen Sondheim, one of the theatre’s greatest (if not the greatest) composers and lyricists, and one of my personal favorites. Featured on the show, among others, will be America Ferrara of “Ugly Betty” and “The Good Wife,” another actress I had no idea could sing, though she has never appeared on Broadway. Hopefully she actually can sing, otherwise why would they hire her?

In honor of these theatre actors on television (and vice versa), here’s a list of other actors known for screen roles you may not have known were trained in musical theatre. Just to clarify, these are not big-name actors with who can perhaps handle a singing role, but seasoned musical theatre performers who also became household names on screen.

1. By now, most people know that The NPH, Neil Patrick Harris, is a veteran of Broadway and musical theatre, as well as television. He’s hosted enough awards shows to inform people of his triple-threat prowess, even if they weren’t familiar with “Dr. Horrible’s Sing-Along Blog.” But just to make sure, and because he’s brilliant, I’m kicking off the list with him.

Here he is as the Balladeer in the 2004 revival of Sondheim’s “Assassins.” (Incidentally, Charles Guiteau is played here by Denis O’Hare, who played opposite Stephen Moyer in “True Blood,” as the ancient vampire Russell Edgington.)

2. Speaking of “Assassins,” the actor who played John Wilkes Booth in the original 1990 production is another stage and screen veteran, who was also the original Anthony in “Sweeney Todd: The Demon Barber of Fleet Street.” Perhaps best known as Jack Bristow in “Alias” or Thomas Andrews in “Titanic,” I’m of course talking about Victor Garber.

In an effort to show his appearance as well as his voice, here’s Garber as Booth in the Carnegie Hall Sondheim celebration (he comes in around 2:08):

3. Best known as Dr. Callie Torres on “Grey’s Anatomy,” Sara Ramirez first won a Tony award for her beautifully overplayed performance as the Lady of the Lake in “Spamalot” (2005).

4. To go back a few years (or decades), the late Jerry Orbach, best known as D.A. Investigator Lennie Briscoe on “Law & Order,” was a true leading man on Broadway, in the original productions of “Carnival” (1961) and “Chicago” (1975), among others.

5. Alan Alda, the very actor beloved as Hawkeye Pierce on “M*A*S*H,” was in a little-known musical called “The Apple Tree” in 1966, where he played three different roles, including Adam, the very first man (opposite Barbara Harris’s Eve). Alas, no video survives, but his voice is unmistakable.

7. The crazy and slovenly George Costanza on “Seinfeld” actually has a beautifully trained musical theatre voice, and first appeared on Broadway in one of Sondheim’s works, “Merrily We Roll Along,” as Joe. Here’s Jason Alexander in the clip below between 1:49 and 3:08. (Incidentally, this is the song America Ferrara will be singing on HBO tonight.)

8. Right before starring as Sam Beckett in “Quantum Leap,” Scott Bakula created not one but two roles on Broadway, in the same show. “Romance/Romance” is two one-act musicals put together, with a simple cast of only four players. The first act takes place in Belle Epoch-era Vienna, the second in the modern-day Catskills—modern day being 1988.

9. Fans of the ‘80s (like me) will always remember Gedde Watanabe as the not-even-remotely-PC Long Duck Dong from “Sixteen Candles”—even if they don’t always remember his real name. As a 21-year-old, but playing a young boy, Watanabe was in another Sondheim musical, “Pacific Overtures” (1976), as “Someone in a Tree.” He enters, with a somersault, at around 1:32.

10. Chameleon Toni Collette of “United States of Tara” (2009), and currently bringing the drama to CBS’s “Hostages,” is another theatre baby, who performed opposite Mandy Patinkin in 2000’s “The Wild Party,” the Michael John LaChiusa vehicle on Broadway—as opposed to the off-Broadway “The Wild Party” by Andrew Lippa. Yes, there were two simultaneous yet completely different versions of “The Wild Party” playing at the same time.

11. I think it’s common knowledge that before “Glee,” Lea Michele starred on Broadway in the musical “Spring Awakening,” along with Jonathan Groff, who also appeared in “Glee” and is currently singing in movie theatres in “Frozen.” But what people may not know is that John Gallagher Jr., currently playing Jim Harper in HBO’s “The Newsroom,” was also in that show, as Moritz Stiefel—and won a Tony for it.

12. If you don’t already know about this last person, you will soon, as she is currently belting out tunes in movie theatres across the country as Princess Anna in Disney’s “Frozen.” The actress best known as Veronica Mars in the eponymous television show (and upcoming movie), Kristen Bell is a wonderful singer and a theatre baby, here in her Broadway debut, “The Adventures of Tom Sawyer” (2001).

Of course there are plenty of others, but we’ll start with this list for now.