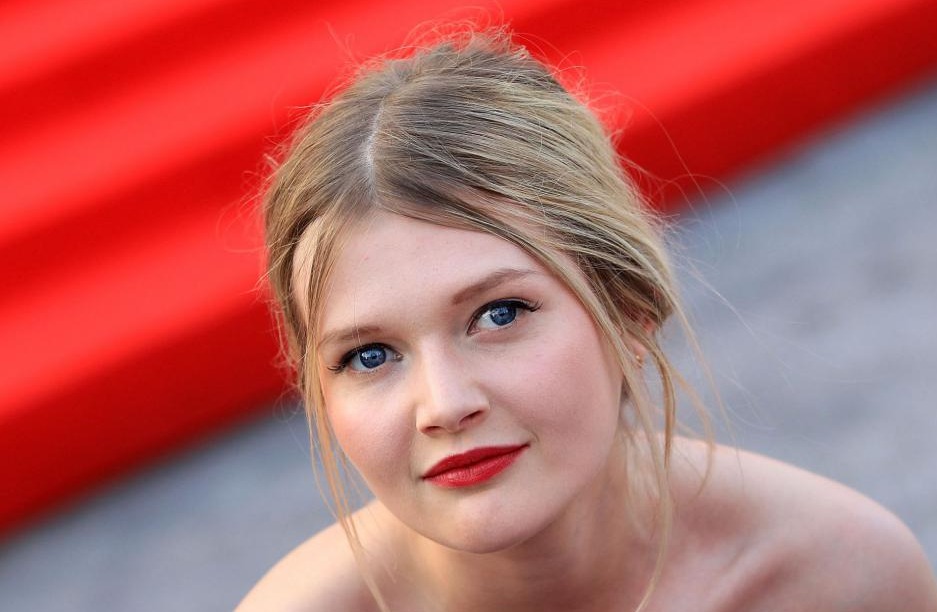 Budding English actress Sophie Kennedy Clark, who plays the young Judi Dench role in “Philomena,” is just beginning her career but she’s already getting fever pitch buzz from a poster circulating online of her character in Lars von Trier’s “Nymphomaniac,” in which she appears to be climaxing. Other boldface names in this orgasmic parade include Shia LaBeouf, Willem Dafoe, Uma Thurman, Stellan Skarsgard and Christian Slater.

The exuberant actress, who has lots of blonde hair and looks pretty terrific out of her “Philomena” convent-garb smock, bounced into a conference room at the Crosby Street Hotel the other day to talk to journalists about the film. Steve Coogan, who co-stars, also participated in the press day.

She had a rigorous audition process for the role of the young “Philomena,” where she plays a naïve young Irish girl sent away to a convent to give birth to a baby boy conceived out of wedlock.

The first audition was a walk through she said. On the second call back, she met with director Stephen Frears.

“I go in and do this nice little scene for him, his arms crossed, and he said, ‘Is that your interpretation of an Irish accent?’”

“I’m like, well Stephen, lovely to meet you, big fan of your work. Have a nice day. Bye.” Her reaction was, “At least I can put it out of my mind.”

Inexplicably, she was called back for a third audition. “I’m like, they’re just toying with me, that’s clearly an option. I’ll go along anyway,”

Clark said she was grilled for the scene “at 10:30 on a Tuesday morning, you need that like a hole in the head,” where she loses her child, watching from a window while her baby boy is being dragged away from the convent to be adopted.

There was a game plan when they lost the audition room. “Stephen, with a booming voice from inside the casting office, said, ‘Just bring her in anyway,’” Clark said.

The casting director told her, “We don’t have room downstairs but you’re going to have to do something. Why don’t you just give birth instead?”

“As an actress, you’ve just got to go, ‘Yeah, of course. Yeah. Yeah. I’ve been working on that one last night. Do you want me to sit here?’”

Frears told her, fine, as he sat there with little hand held camera and Clark climbed on the table.

“I put my head back, my legs akimbo, and I looked up and I thought to myself, ‘I’m going to so make him regret this. I’m going to scream his bloody roof off.’”

She said she didn’t hold back and completely got into it. “You look like a fool if you don’t. I worked myself up into such a tizzy. I ended up in fits of tears. I’m shaking. When they said, ‘Stop,’ which was after quite a long time. Like they really left me, and there was a moment where I was kind of looking over to the mirror, like, ‘Seriously?’ Still going, and I could barely even speak.”

When it was over, she got up and walked out of the room.

“I almost completely lost control because you put yourself in such a place in your head that is very unnatural to your body because you’re not giving birth,” she said. “And you have plans to have coffee with your friend afterward, which you very quickly have to cancel because you look like a train wreck.”

She was sure she hadn’t got the part. “I never want to think about this again,” she thought.

Instead, “As luck would have it, two weeks later, I get the role, and I haven’t really stopped thinking about it since.”

Still, “Philomena” was a walk on the beach compared to “Nymphomaniac,” which she was in the middle of shooting when she got cast in “Philomena.”

“My parents were thrilled,” she said about her getting cast in “Philomena.” “You know, proud parents, they can’t really go down to the pub and say, ‘Sophie’s in ‘Nymphomaniac.’”

“Those posters. Udo Kier’s face! He’s a treat,” she laughed about he face on the poster. “They are something I didn’t really ever want to discuss with my parents, to be honest. I don’t know if you’ve seen the orgasms of your parents, but I certainly haven’t.”

As for “Philomena,” her parents have seen the film and “absolutely love it,” she said.

“My father does send me texts every now and then saying still how seething he is at the Catholic Church.”

Asked whether her parents will see “Nymphomaniac,” Clark replied, “I’m sure they will. I think they’re curious, if nothing else, like the rest of the world after all these little snippets that he’s [von Trier] been releasing.”

Last summer, she completed another film, “Eliza Graves,” directed by Brad Anderson, a thriller based on an Edgar Allan Poe story and set in a mental institution.

“I play a lunatic,” Clark laughed. “It wasn’t much of a stretch. It’s the easiest role I’ve done so far.”

The film stars Sir Ben Kingsley and Sir Michael Caine. “I’m only doing movies with sirs and dames,” Clark cracked. It also stars “Kate Beckinsale, fine British actors, a real corker of a script, and just wonderfully fantastical in that kind of Edgar Allan Poe way. I got to have a lot of fun being the ultimate weirdo that is within us all.”

“I’m actually thrilled about this movie being flashed on screen. I probably won’t have a boyfriend for a very long time,” Clark laughed.