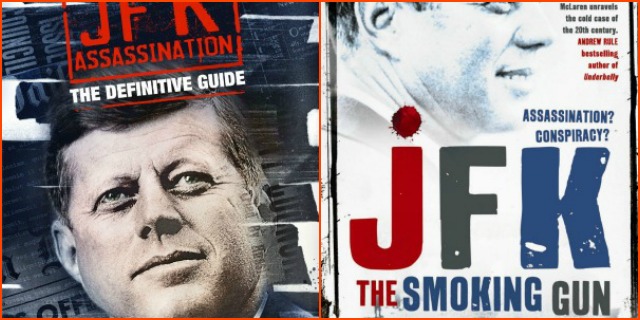 1. “JFK Assassination: The Definitive Guide” – A History Channel DVD that explores the assassination that forever changed America. Fifty years later, most Americans think we don’t know who did it. History has conducted the largest nationwide survey on the topic to learn what the country believes. Who do Americans suspect was really responsible for JFK’s death? Take a deeper look through the eyes of those to whom it matters most: the American people.

2. “JFK: The Smoking Gun” by Colin McLaren. This book explores thoughts on who really killed JFK and claims to solve the ultimate cold case. With the forensic eye of an ex-cop, McLaren gathered the evidence, studied 10,000 pages of transcripts, discovered the witnesses the Warren Commission failed to call, and uncovered the exhibits and testimonies that were hidden until now.