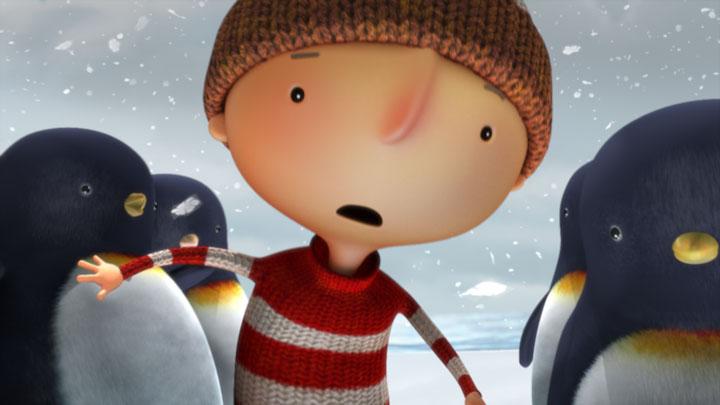 Sex/Nudity: None.
Violence/Gore: None.
Profanity: None.
Drugs/Alcohol: None.
Which Kids Will Like It? Kids 3 and older.

Will Parents Like It? This adorable tale for kids offers a sweet message about the importance of friendship and how you should always help a friend in need.

REVIEW: It’s very rare to come across a children’s movie that earns a “none” in all of those details above. No sex or nudity, no profanity, no violence, no drugs or alcohol. You might think that most children’s movies would fall into that category, but that’s not the case. Most of them include some questionable content. Whether filmmakers are trying to appeal to adults who might be watching the movie with their kids, I have no idea.

But it’s not that hard to create the perfect children’s movie, and “Lost & Found” proves it. Take a sweet tale of friendship, like the one found in Oliver Jeffers’ best-selling picture book, and create a film specifically for the intended demographic – kids aged three and older. Don’t try to interject things adults might like. Don’t embellish the story. And don’t be afraid to let the story speak for itself. Sometimes, simple is good.

“Lost & Found” tells the tale of a boy who opens the front door of his house one day and finds a penguin standing there. The boy determines that the penguin must be lost, so he sets out to figure out where penguins come from, and then find a way to get this one back home. The penguin and the boy become fast friends, but when the two set off in a rowboat headed to the South Pole, it’s not clear if that’s even what the penguin wanted. The journey to the South Pole is long and difficult in the boy’s rowboat. There are fierce storms to brave and dark nights to endure. To pass the time, the boy tells the penguin stories. But when they finally arrive at their destination, both the boy and the penguin are sad. And that’s when the boy realizes that the penguin hadn’t really been lost at all. It had just been lonely.

You never really know whether a film adaptation will accurately capture the charm of a beloved book, but this film accomplishes that beautifully. Narrated by legendary actor Jim Broadbent, the movie is gloriously colored and also features Jeffers’ signature typography in the boy’s village.

The fact that there’s no direct dialogue – only narration – allows viewers to focus on not only the boy and penguin’s gestures and expressions, but also the story’s central theme. Their journey to the South Pole goes deeper than a mere trip in a boat. It’s about finding friendship and knowing that a true friend will always be there for you.

And yet, it doesn’t shirk from the fact that being alive in this world means there will be times when you’re sad and lonely. But you can get through it if you have a good friend standing beside you. That’s why this breathtakingly beautiful, subtle and poignant film is great for both kids AND adults.

The relatively short runtime makes this film a winner for little ones. The DVD also includes a bonus “Making Of” featurette.