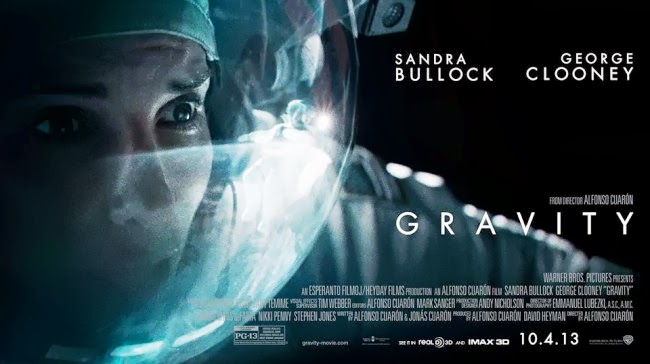 It’s not often that a movie comes along that I put into the “riveting” category. The recent Hugh Jackman thriller “Prisoners” fits into that category, and before that, I’d have to go back to “Zero Dark Thirty,” way back in January. I can’t imagine anything more terrifying than being adrift in space, not tethered to anyone or anything, spinning out of control and out of sight among the stars. But that’s just the situation medical engineer Dr. Ryan Stone (Sandra Bullock) finds herself in on her first trip to outer space. And Bullock plays it with just the right amount of panic, making you feel like you’re right there in the void with her. In interviews, she’s said it’s all about the breath and how the human body reacts to sheer terror.

While performing some tasks during a final spacewalk before she and the rest of the crew are supposed to return to Earth, the Russians shoot down one of their own satellites. The explosion causes a raft of space debris to hurl through space, threatening to wipe out all orbiting space stations, including Stone’s shuttle.

Along with seasoned astronaut Matt Kowalsky (George Clooney), Stone struggles to survive — not just this particular accident, but her own personal demons, including the death of her daughter some time before the space expedition.

Director Alfonso Cuaron has crafted an amazing bit of filmmaking with “Gravity.” It’s both entertaining and frightening, encompassing everything from mortality to tragedy to the indomitable strength of the human spirit. And the film is simply stunning, thanks to the work of cinematographer Emmanuel Lubezki and visual effects supervisor Tim Webber, who decided they couldn’t make the film using traditional methods.

For the spacewalk scenes, they shot the actors’ faces and create everything else digitally. But they had to ensure that the facial light be a perfect match for the Earth, sun and stars in the background, so they folded an LED screen into a nine-foot box, putting the actor inside, and using the light from the screen to light the actor. And yet, to the viewer, these actors indeed appear to be floating in space.

One of the things that struck me about “Gravity” is that we really get a feel for how quiet it is in space (one of the reason’s Stone said she loved it there). Our lives are so fast-paced and busy, that we really never get to just sit and be still in absolute quiet. It sort of made me yearn for a spacewalk myself, and I am not the least bit adventurous in that way!

Also, a word about the 3D effects. “Gravity” is the type of movie that 3D filmmaking was made for. I didn’t see the IMAX version, but I would imagine you feel like you’re right in space with objects hurling past you. However, because of that, “Gravity” might be a bit of a challenge for the vertigo-challenged among us. I had to close my eyes in a few scenes where people and things were spinning out of control.

But don’t let that dissuade you from seeing this meditative, gripping film. It will surely do well during the upcoming awards season, as will Sandra Bullock with her soulful performance. Oh, and Ed Harris is the voice of Mission Control, which is fun because he had a pivotal role in one of my favorite space movies, 1995’s “Apollo 13.”

Sex/Nudity: Some flirting from the male astronaut (mainly trying to distract the female scientist because she’s freaked out by the accident!). The scientist is seen in skimpy clothes after taking her space suit off inside the shuttle.

Violence/Gore: A missile shooting of a satellite causes a debris shower in outer space, which wreaks havoc on the space station and kills most of the crew. When an astronaut’s face shield is broken, half of his face disappears (not particularly gory, but still frightening in a horror-movie kind of way). Dead astronauts are shown floating, and the survivors face constant peril.

Drugs/Alcohol: References to characters buying each other drinks. A character drinks out of a bottle on a Chinese space station.

Which Kids Will Like It? Kids 13 and older who like Sandra Bullock or George Clooney, or who like movies about space. It’s really quite educational and from what I’ve heard, not completely science fiction when it comes to space debris.

Will Parents Like It? “Gravity” is well made, compelling and keeps you on the edge of your seat from start to finish.

Editors: Buy this review or sign up for Jane’s syndicated movie reviews here.