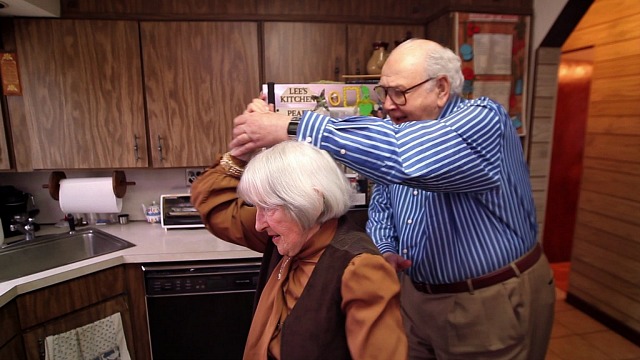 You know that Swiffer couple? The ones who dote on each other and dance in the kitchen? Turns out they’re a real-life couple. Lee and Morty Kaufman have been married for 44 years.

In an interview with AdAge, Morty said they did the commercial because his daughter Myra recommended them to a casting director who was looking for an “older, more mature couple.” “Then they came and looked us over and said ‘very good,'” said Morty. “Nothing romantic, but very simple.”

The couple made me love them even more by saying stuff like this when asked about their daily routine:

Morty: My daily schedule is adoring my wife.

I think part of the fun is that they could be our neighbors or grandparents. In fact, I’m sure most of us have a couple like Lee and Morty in our lives, probably with that exact same kitchen.

They’re just so cute! I kept thinking they need their own TV show, but that might take some of the fun out of it. Plus, they’re both 91, and I’m sure they have better things to do than worry about going to a TV studio every day.

Audiences were first introduced to the lovebirds in July, when Proctor & Gamble cast them in a series of spots intended to demonstrate the “Swiffer effect.” From their home on Long Island, we looked on as Lee, a retired schoolteacher, struggled to keep their home clean using an old-school mop and bucket, while retired pharmacist Morty doted on her.

They were given a blue P&G box full of Swiffer products that would hopefully simplify Lee’s arduous mopping and dusting routine. Among the products they tried was a Swiffer WetJet. Over a two-day period, the couple filmed a testimonial that would later be cut to a three-minute clip as well as three 30-second spots.

So do they like the Swiffer products? “We were very pleased, because it seems to be a very efficient and easy to set up process,” said Morty.

Good job, P&G. I wouldn’t normally go buy something just because I’ve seen it on a commercial, but if the products work for Lee and Morty, that makes me think they’d work in my home too.

Thank you to Proctor & Gamble and Lee and Morty for reminding us of the simple things in life – love, longevity and Swiffer.

The youngsters also appeared on the Ellen DeGeneres show recently – check out the clip below.