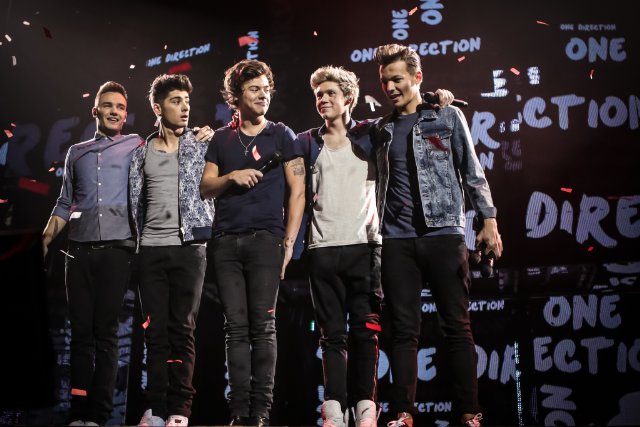 Prior to seeing “One Direction: This Is Us,” pretty much everything I knew about the boy band I learned from my 16-year-old daughter. She’s kind of grown past the group now, but she still counts herself a fan. Even so, I still didn’t know a lot about them. There have been lots of concert movies during the past decade, including “Katy Perry: Part of Me 3D,” “Glee 3D Concert Movie,” “Hannah Montana & Miley Cyrus: Best of Both Worlds Concert” (back when she was sweet and innocent), and “Michael Jackson’s This Is It.” They’ve all had varying degrees of concert performances and behind-the-scenes footage, but I’m always more interested in seeing what happens when they’re off-stage. I don’t mind throwing a few songs in here and there, but I imagine most people are like me and watch a music documentary to learn more about the people.

PHOTO GALLERY: One Direction: This Is Us

Director Morgan Spurlock, whose credits include “Super Size Me,” “Freakonomics,” and “The Greatest Movie Ever Sold,” gives us a good amount of off-stage footage, so by the time the end credits roll, we feel like we know a lot more about these boys whose rise to stardom was sudden and dramatic.

While the film follows their first international concert tour, it begins with some backstory. Each of the guys in One Direction – Niall Horan, Zayn Malik, Liam Payne, Harry Styles, and Louis Tomlinson – got their start on the British talent show “The X Factor,” where Simon Cowell made the fateful decision to put them together into one group. But they didn’t win the competition. In fact, they got booted off the show, but by that time – even without a hit record – they’d already gained a huge fanbase, who became the group’s de facto publicists and unofficial Twitter promoters.

From there, the group just got more and more famous, until they were performing everywhere from Madison Square Garden to Japan, Germany, France, Spain, Scandinavia, and back home at London’s O2 Arena. But if we’re to believe the film’s premise, these boys are still grounded in their middle class beginnings, and I’m sure every parent who watches this movie hopes they don’t fall prey to the trappings of superstardom, like doing drugs, acting crazy, and forgetting who their friends really are.

It HAS to be hard for young kids to stay grounded when they’ve got people doing their bidding at every turn. We’ve seen the dark side of that with Miley Cyrus, Lindsay Lohan, Justin Bieber, Britney Spears and countless other young stars.

And then there’s the whole “boy band” thing. As Zayn jokes in one scene, “We’re a boy band, but we’re a cool boy band.” I don’t know if that’s a diss toward every other boy band out there (I mean, Justin Timberlake and ‘N Sync got the band back together at the recent MTV Video Music Awards, and they’re still pretty cool), but you have to admit, One Direction really is kind of cool. That’s partly because they’re not immune to the fact that the fans made them who they are and Simon Cowell had the foresight to put them together in the first place.

But look, One Direction CAN really sing, and they’re all cute as the dickens. They know their strengths (they fully admit they can’t dance worth beans) and despite the tattoos, they’re clean-cut enough (at least in the film) to make them accessible to tweens in the 8- to 11-year-old range.

For me, it’s hard not to draw parallels to a couple of other British bands from my era – The Beatles and The Rolling Stones. My daughter asked me which One Direction singer was my favorite, and I said Harry Styles, “because he even looks a little like Mick Jagger.” I had to laugh when Styles made a reference in the movie to One Direction being together forever – like the Stones.

The film does explore a bit of their home life – so sweet when one of them bought his mom a house – but we don’t really see any relationship issues like we saw in Katy Perry’s film (the implosion of her marriage to Russell Brand). That’s ok. It makes this film a little more tween-friendly, and Spurlock knows that’s the film’s main demographic.

In one way, I miss seeing Spurlock in front of the camera, as most of his films feature HIM investigating a thing or philosophy or group of people, like “Comic Con Episode IV: A Fan’s Hope,” a documentary about the fans who gather in San Diego every year. But he has a knack for knowing what people are talking about, and knowing what will translate well to the big screen. “One Direction: This Is Us” does just that.

Sex/Nudity: The guys often hang out backstage shirtless, with their various tattoos in view. A scene shows one of them changing his clothes, with a brief view of him in boxer briefs. Some of the songs are overly romantic and refer to physical attraction, but for the most part, the PG rating is on target.

Violence/Gore: None, unless you count the legions of One Direction fans who sometimes swarm around them and threaten their personal security.

Which Kids Will Like It? Kids 8 and older who are fans of One Direction.

Will Parents Like It? It’s an interesting look at what goes on behind the scenes of a popular musical group, and it’s especially relevant if you have kids who are fans.