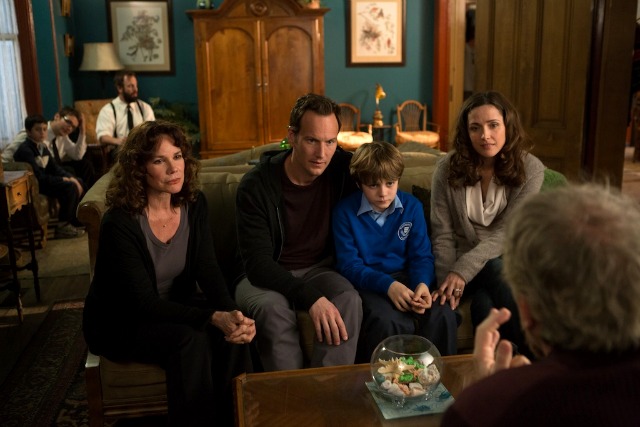 Can we please just make a rule that all horror movies be rated R? Is that too much to ask? No, there’s not much blood in “Insidious: Chapter 2,” but that doesn’t mean it’s not super scary — too scary for 13-year-old kids.

The movie features a bunch of jump-out-of-your-seat moments, including a really angry ghost who slinks around the house and attacks people. That’s why I’m filing this movie in the “ok for kids 15 and older” category, and even that’s a stretch.

I didn’t see the first “Insidious” movie, but the filmmakers include enough backstory so those of us jumping into this one cold have a pretty good idea of how we got here.

When Josh Lambert (Patrick Wilson) returned from “the Further” — the spooky world of the dead — with his missing son, Dalton (Ty Simpkins), at the end of “Insidious,” it appeared that everything was going to be fine. But of course, it isn’t. Because then how would they make all those millions of dollars on sequels?

The ghost-whisperer medium, Elise (Lin Shaye), is dead, and Josh is a suspect. While the cops investigate what happened, the Lamberts take refuge (uh, not) at the home of Josh’s mom, Lorraine (Barbara Hershey).

Much to her chagrin, Josh’s wife, Renai (Rose Byrne), starts hearing and seeing scary things again. A baby walker with light-up lights starts moving about the house on its own (I mean, it’s creepy even without the scary-movie backdrop; whoever designed this thing has a dark sense of humor). The piano starts playing a song Renai wrote for Josh. Doors open and shut, lights flicker, things move, you know the drill. And Josh himself is acting really, really weird. If I was Renai, I would pack up those kids and get the heck out of there – anywhere but there! Meanwhile, Lorraine contacts Elise’s assistants, Specs (Leigh Whannell) and Tucker (Angus Sampson), for help. These two provide much-needed comic relief in a sea of ghost anxiety. It’s looking like another trip to the Further is in the Lambert’s immediate future, but will they survive?

Director James Wan has a long history of horror movies, with “The Conjuring” still in theaters (that one IS rated R), the first “Insidious” movie, and all the “Saw” movies to his credit. So basically, he knows what creeps us out, and he uses all of it – séances in dark rooms, dice that spell out words, ancient homes with lots of wood (I don’t know why, but spirits like ancient homes with lots of wood), a scary old hospital filled with spirits, and a super-scary, abusive ghost.

Thankfully, Wan doesn’t resort to the shaky camera effects that so many filmmakers love these days (I’m not a fan). Instead, he uses smooth, three-dimensional space and offscreen sounds to generate tension. He moves the camera freely through homes and buildings (including a scary old hospital, in this case), using ordinary things like walls, doorways and lights to scare us. It’s very Hitchcockian, in that regard. Joseph Bishara’s soundtrack adds another suspenseful layer. It’s that type of music that makes you feel like you might actually be losing your mind.

As mentioned, “Insidious: Chapter 2” is free of the gore, profanity and sex that crowds most horror movies – but again, that doesn’t mean it shouldn’t be rated R.

There are some things I just didn’t get in this movie. Like in one scene, someone encounters a room filled with sheeted figures, their hands sticking out from underneath the sheets. The filmmakers got back to it later, but immediately following that scene, people went about their business like they were passing through on their way to get an ice cream cone.

But if scary movies are your thing, then “Insidious: Chapter 2” will likely scare the heck out of you. Just don’t let the 13-year-olds go see it.

Violence/Gore: Like all horror movies, “Insidious: Chapter 2” is filled with scary images, sounds and many jump-out-of-your-seat moments. A father (who’s not really the father) is seen attacking his wife and children, and lots of household objects are hurled. Ghosts chase and attack people, including a young boy. Characters use a taser gun and a sedative-filled syringe. A dead body is shown, but only a tiny amount of blood is seen. A character pulls a tooth out of his mouth.

Which Kids Will Like It? Kids 15 and older who like horror movies or who watched the first “Insidious” movie.

Will Parents Like It? As scary movies go, “Insidious: Chapter 2” isn’t bad. But it should be rated R.

Editors: Buy Jane’s movie reviews for your publication. Click through for more info or email jboursaw@charter.net.