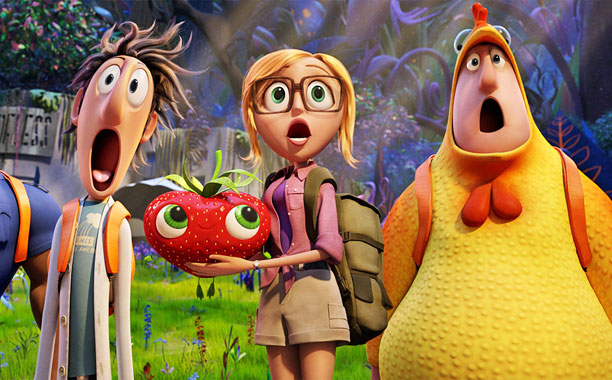 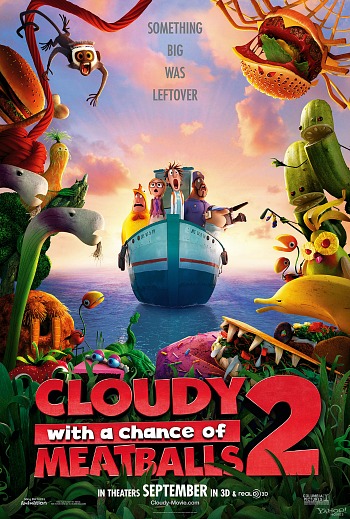 REVIEW: “Cloudy With a Chance of Meatballs 2” picks up immediately after the events of the first movie. You remember that the town of Swallow Falls was taken over by the massive foodstuffs, putting the residents’ lives in peril.

The technology firm Live Corp. — led by CEO Chester V (voiced by Will Forte) — swoops in to clean up the mess. Chester tells everyone they must leave the island and offers young inventor Flint Lockwood (Bill Hader) a job at his renowned company in “San Franjose.”

Soon, Flint is living the dream – well, sort of. He drinks a lot of coffee and works 9 to 5 in a Live Corp cubicle inventing things. When Chester reveals that Swallow Falls has been taken over by monster food-animal hybrids, he sends Flint in to retrieve his invention (the Flint Lockwood Diatonic Super Mutating Dynamic Food Replicator, a.k.a. FLDSMDFR).

What to say about this movie. It’s cute. The animation is bright and colorful. The food-animal hybrids are at times adorable or menacing. The voice cast is great. And yet … it doesn’t really stand out from the crowd of animated family movies. Maybe because the first movie so beautifully celebrated (though loosely) the classic children’s book. This is a nice movie, but cynical me says it’s designed to create buzz for a new line of toys and branded products – just in time for Christmas!

But let’s look at the things that stand out, starting with the really creative foodimals. We’re talking a Jurassic Park of food-stuffs — shrimpanzees, cheese-spiders, and hippotatoes. It’s an entire eco-system of living foods, which, of course, leads to the question of whether this thing should be shut down or allowed to thrive (it’s an environmental movie!).

Some of these creatures are scary, like the taco-dyle , which is like a Taco Bell Supreme Taco that’s super huge and scary. Instead of eating this delicious fast food, it most likely will eat you. Others are sweet and cuddly, like pivotal character of Barry the strawberry, the fruit cockatiel and the mini-marshmallows. They’re not quite the stature of “Despicable Me’s” minions, but they’re cute.

Some things will likely go over the heads of little ones. Like the fact that Chester looks a bit like Steve Jobs with his turtlenecks, facial hair and visionary outlook. And little throw-offs like “there’s a leek in the boat,” references to “Jurassic Park,” and a comical shout-out to the old “Butter-Parkay” commercials (do they still have those anymore?).

There’s also a scene where the characters pretend to have guns in their hands, and all I could think was, is that really necessary? It adds nothing to the storyline, and family movies and guns just do not mix.

I did love the message of openness and new discoveries. Just because there’s a new eco-system populated with foodimals, does that make it bad? Is it necessary to shut down the system and destroy all the new foods? Just because something is new and different doesn’t make it bad.

So here’s the bottom line: “Cloudy With a Chance of Meatballs 2” is a cute sequel that kids will probably love and might even learn something. But it likely won’t make any “top ten best family movies ever” lists.

Sex/Nudity: Flint and Sam occasionally hold hands and hug, and there’s one kiss.

Violence/Gore: The food-animal hybrids, like the cheese-spider, taco-dyles and apple pie-thons might be a little scary for youngsters. Flint and his friends spend much of the movie in peril, and at one point, his friends look like they’ll be compacted together (though it doesn’t happen, of course). An evil character falls to his presumed death.

Profanity: Insults include “idiot,” “loser” and “stupid monkey,” as well as pseudo-swear words like “oh crab cakes” and “crapballs.” A device called a “BS-USB” is featured throughout the story.

Drugs/Alcohol: A character drinks lots of coffee, to the point where he appears to be addicted.

Which Kids Will Like It? Kids 6 and older who liked the first movie or book.

Will Parents Like It? The characters are cute and the animation is lively and colorful. I don’t think it will grab adults, though.